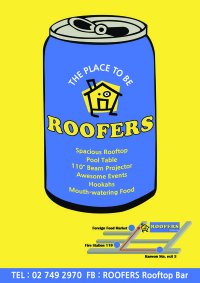 First off, Roofers in central Seoul’s foreigner borough of Itaewon  is a very accommodating place for anyone. It’s a

substantial space with a mixed décor of a black and white checkerboard floor and 10-foot ceilings. The small wooden shoe-shine red colored square bar and open window kitchen are fundamentally set up out of the way of the main floor and it all combines to give the place the hip look of a Chicago supper club of the 1940’s. With Japanese and Sri Lanken cooks in the kitchen the food is very much better than average and with quick bartenders from Iran, Canada, and Korea, Roofers is a place of potential and well meaning for foreigners. And when the weather finally turns, there’s more cause for good vibrations. The real upstairs of the place is actually a roof. Steve Kang, the owner of the place said, “We are going to open the roof at the end of April.”

It also aims to be Seoul’s top Expat performance place. When you open the heavy front doors, soft sofas and card table chairs are cast around everywhere filling in the large space all the way to the back until a Doc Martin boot height elevated stage begins. And stage it is tonight as over 100 hipsters have paid (myself included) 10,000 won (about 10 bucks) for a Seoul City Improv (SCI) fundraiser. The money will help send five Seoul based performers over to Taiwan to perform with that local foreigner theater troupe.

I have not seen much Improv before, yet this will be at least my fifth watch of a performance from Seoul Players: Seoul City Improv, Night of 1,000 plays, The Reindeer Monologues are all part of their running tally. When I witnessed the Night of 1,000 plays it was the most annoying night that I have ever spent in the theater. Local expats submitted short skits and then acted them out. Acting out is right here for all of the three-minute-or-less stuff had a very juvenile new age recovery feel to it: Actually I have been through this and this happened to me so everyone pay attention because sweet dreams are made of me. Between these effects-of-Xanax moments and waiting for Pollyanna diction so bad it would have taken the cracks out of the Liberty Bell to stop, I kept waiting. Waiting for the one spark to bust open the cocoon of self. That possibility that the material is connecting with the audience and that the players are connecting with the material. Unfortunately it happened. The skit that got the most laughs was BABY JESUS; its plot was about a white trash incestuous family where the marijuana using grandmother exclaims, “I told them all I was only an occasional user.” The line that got the most applause of the night came from a sister who announces to the audience, “I can’t believe that my sister is pregnant with baby Jesus.”

You would think anyone who has decided to pull up the tent and live in a foreign country could (being organized and all) do more with their 15 minutes of fame than that.

The press release for this night says:

Seoul City Improv has been entertaining the city for nearly three years, and is now taking its improvised comedy on tour outside of Korea for the first time. The group has been invited by Taiwan’s premiere improv troupe to take part in a joint show of improvised hilarity in Taichung on April 24th.

Now, not only does this gang all want a lot of attention, but now they want your money too. Yeah I feel it, in theory pull the wallet out of the pants and help the international hipsters. In reality hunker down at the bar and get ready for two hours of clangorous self-absorption. I’m not going to concentrate so much or hope for someone on the stage to re-choreograph a cliché and reveal something actually funny, but, I just have a deep internal Easter weekend wish that they don’t do that “Do run run” thing.

It’s like children of the corn standing close to each other on an electrified stage. All groping for a funny moment like about the last time that they saw their fathers naked and then the switch is thrown and electromagnets underneath the stage are off and we get to watch them them pop and fizzle in the very lame spotlight.

I bumped into one of the members of the Seoul Players and in an unplanned chat she quipped with a blink of the eye about the substance of the performances here in Seoul, “Well, hey It’s not New York…” But wait a minute I’ve come to believe that it is New York. I mean there was a time being a New Yorker meant staying in every other Saturday night to read and cook then later turn on the screen for some Saturday Night Live giggles. What’s happening in modern New York? Everyone wants to get out and bang their drum. Yeah, it’s trendy in Brooklyn and you can reckon having to be out and make the scene on a Saturday night, “Well that’s only Facebook New York,” but my point is the only difference between the urban middle class mediocrity of performers in Itaewon, Seoul and those same performers in Green Point, Brooklyn is minus or plus an extra 30 thousand dollars in the bank. Either way, in either place, the tagline is the same: the show must go on.

I laughed or smiled or clapped a couple of times each this night and perhaps they were just gestures to relieve the self-conscious pangs asking, “What the fuck are you doing here?” I mean racial and sexual tropes about “Indian pancakes made with Curry,” “Satan loves Easter,” “While you’re down there…” And Improv pieces of, “Your job was a, ‘Ice Cream Truck Driver’ and now you are, ‘A bank Robber.’” Well, I would not have even remembered any of this if I didn’t bother to write it down.

The audience gets to take part too. In a game called, “Freeze” performers are locked in a physical position and the audience can come to the stage and move the action forward by a physical pose and carrying on the dialogue. Well tonight everyone, the audience and the players, alike takes the comic task of being intuitive right to a grope between the legs and, “While you’re down there…”

I have not contacted the improv* group in Taiwan but there Facebook description says, “We’ve got the rhythm in our hips…DING DONG!”. Well if they change their mantra to, “If all else fails mention debauchery and then dwell on the dog,” sign me up to their hip and funny.

I think to give Seoul City Improv a very practical review I should make a suggestion. Through a lottery three performers should be chosen. Three days before the show they should completely go off-line: no phones, no torrents, no TV. For those three days the majority of their diet should be sugar. Anything mostly made with sugar. If the Improv starts at 8p.m., then the three should arrive exactly at 9p.m. and go right to the empty stage. At that point the tech turns on Iggy Pop’s “I wanna be your dog” really really loud! And other members of the Improv group start tossing around empty candy wrappers. So let that Improv begin. I’d gladly hand over 10 bucks for that. Fuck Yeah! That’s entertainment and the performers would really have to earn their 15 minutes of fame.

It’s been four days going into Easter; I haven’t eaten meat and maybe this makes me hypersensitive and biochemically too equipped to play Mr. Gravitas. I know that everyone gets a kick out of lowest-common-denominator humor. Yet, really, is that all it is? I’ve also had a few Jameson’s-on-the-rocks and when I look around the smiley room, somehow I am for sure that low-brow humor equals the new bourgeois code. The rub is that Improv is meant to be hip, urban, and groundbreaking. Acting your shoe size and not your age and shouting out puerile lines like, “Punching babies,” and, “Break my Hyman” is the opposite: it’s just part of a suburban agenda.

The glaring disappointment here is that anyone who is not completely self-absorbed or utterly self-conscious can see the possibilities for this kind of performance. Like most of the foreigner entertainment over here — musical, spoken word, whatever — if they know that they suck, it would be funny and interesting. Whether its music or comedy if local performers and scenesters took themselves less seriously, there could be a golden halo of Zen wit surrounding everything we did and it would really be amusing. By just breaking the restrictions of time and space of how anyone ends up on a Saturday night in a club in Seoul, Korea is a gas. But instead, as this night shows, the foreigners/performers yoke, part scatology and part neediness just drags it all down. 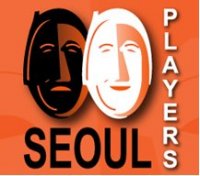 On the upbeat note— I spoke with Lyle Arnason who has been part of Seoul Players for over three years. He is cast to be in SP’s upcoming musical The 25th Annual Putnam County Spelling Bee. He promises the show to be, “Cream of the crop.” I for one believe him as he is the only member of Seoul Players I have ever spoken with who has a strong background in and passion about theater. The Three Wise Monkeys will be given some tickets for the “Media Night Performance” on Friday, May 29.

If you are interested contact us at 3wmseoul@gmail.com. The musical has been cast but if you want to help with crew/ set design or some other vitals of producing a play, contact: Lyle at lylebjorn@gmail.com

Margaret Whittum is the founder of SCI.

For more on Seoul Players — they certainly are active here: Claire Noble

Mizaru is the creator and founding editor of The Three Wise Monkeys
Contact 3wmseoul@gmail.com