I love movies.  I know a lot of people love movies, and I wouldn’t say that I’m any kind of special aficionado, but others might say that.  I do tend to think about movies a lot, and I enjoy thinking about dialogue and recalling particularly favorite scenes.  Sometimes, I have these little situations that remind me of situations that might happen in a mo

vie, but I’m relatively boring, so those are few and far between.  Here is a little anecdote, and you can tell me if you agree that it could have sprung from some “screw-ball” comedy—of errors?  Possibly.

A very pretty Asian (Korean, to be more specific) nurse is sitting behind the reception desk.  She has that kind of flawless skin and straight shiny hair that hallmarks the crème de la crème of her type.  She has a huge diamond wedding ring on her finger, and it’s easy to see why.  She calls out a patient’s name.  It’s our guy.  He and the nurse exchange greetings that indicate a certain level of familiarity.  It’s not difficult to guess that the man has been here before.  The nurse hands him a white paper bag and directs him into the hallway behind her desk.  Again, it is obvious he knows where he’s going.

Where he does go is into a short and narrow, dimly lit hallway.  There are three doors on the right side and a little dumbwaiter type arrangement at the near end.  The man goes to the last door and opens it.  On the other side of the door is a tiny (also dimly lit) room with a TV sitting on a console in front of a large leather(-ish) easy chair with a footstool in front of it; a sink in one corner with some liquid soap and hand lotion on the counter stands close at hand.

The guy steps into this closet-like room and closes the door behind him. We notice

That all really happened.  Unfortunately, the “incident” so rattled me that my “specimen” wasn’t really sufficient for the purpose of getting my wife pregnant.  Better luck next time, as they say.

Actually if you want to know what they say, you can look it up on the ol’ Internet.  Fertility specialists say that the odds of naturally conceiving a 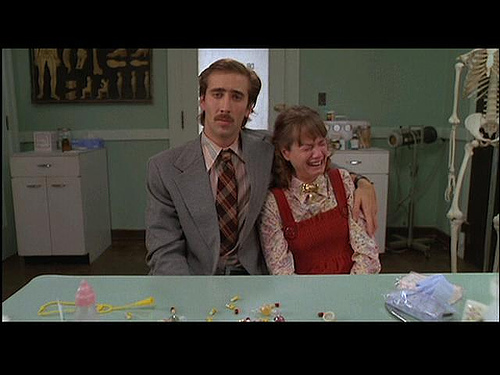 baby “the good old fashioned way” drop to a measly 5% after one year of trying.  Called subfertility, this is usually because there is some kind of complication with one or both partners.  In our case, it was both.  Have you ever seen the movie Raising Arizona?  Before the opening credits, we learn that the unlikely married couple portrayed by Nicholas Cage and Holly Hunter aren’t able to conceive because she’s “barren” or, as H.I. (Cage) says, “Edwina’s insides were a rocky place where my seed could find no purchase.”  Fortunately for us, my wife wasn’t in such dire straits.  There was something which could be done.

What could be done was intra-uterine insemination.  The procedure does not remove the egg from the woman, but merely involves processing the sperm from the man to remove any specimens that might be less than fully healthy, and then depositing them in the woman with a kind of syringe.  Not nearly as sexy or exciting as a full-blown in vitro fertilization, but also much more cost effective, and the doctors were confident that it would fit the bill.  I’m older(ish?) 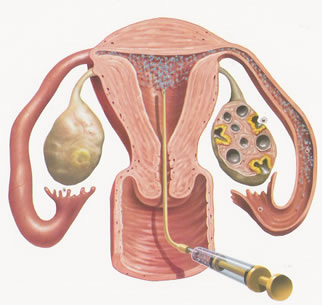 for being a potential dad, so I wasn’t off the hook.  The processed sperm would have the best possible start.  After that, Mother Nature would still be involved.

My wife began a series of fertility treatments.  This involved some drugs and hormones.  The process took several months before her body was ready to have a chance at getting a baby going.  Once she was ready, it was my turn to play what role was left—that of sperm donor.  The romance really does go out the window once you start down this road.  That whole thing in TV and movies when the doctor says “you can still keep having sex to try to have a baby naturally” is actually all sit-com nonsense.  Since we were problematic, I had to make sure I was conserving “the goods” for when they needed to be “officially” delivered.  How that was accomplished, I remain blissfully ignorant.  My wife never wanted to go into details about it and I had very little desire to press her about it.  Don’t think, though, that the creeping worry that “maybe they mixed them up” didn’t cross my mind from time to time.

Only that one time (the second try) did anything really “funny” happen. My third, and final, trip was all that was needed. The third attempt was successful and we were on our way to being parents.