Editor’s note: we all know how annoying or whimsical Konglish can be in public places. But this Rant is a different consideration on Konglish.

Have any interesting examples or images about Konglish?  Send them and we will work them in: 3wmseoul@gmail.com 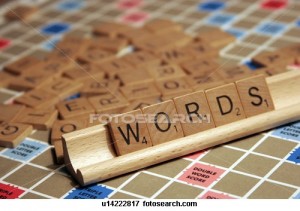 “Language is a skin. I rub my language against the other. It is as if I had words instead of fingers, or fingers at the tip of my words. My language trembles with desire.”     Roland Barthes (French Critic)

When reading any of the English language mainstream press in Korea, it is hard not to run into something sooner or later that comes out against “Konglish”. You know the phrases in English with a Korean twist to its usage. “Handphone” instead of cell phone or cellular phone; “One shot” instead of cheers or bottoms up quickly come to mind. The mainstream hack with perhaps too little time or spirit to explore fresh expression no doubt wants to grind Konglish back down to earth and chastise anyone who is not at open war with it. Tirades against “Konglish” are often delivered by various Korean government officials with a PhD. In linguistics but will never know what a good bowl of linguine is like. And then of course there is the real English teacher– often with an advanced degree in teaching TOEIC, TOEFL, TESOL, CELTA or some other title of the absurd as their calling card.  All of these language trainers and promoters plying their trade and making bank in Korea argue that Konglish acts like a virus infecting Korean students who are just trying to get standard English down to get a better job at the company improve their station in life or something like that.

Maybe so, but think again native and non-native English speakers alike. Is not some of the Konglish made by crunching at Standar

d English so expressive that it carries Standard English to other areas of beauty and expression? Let’s start with the simple “Eye Shopping”: Koreans will often say this instead of “window shopping.” Are we shopping for eyes or windows? Neither obviously, but what Konglish takes in at the same time as it attempts to speak out is the quirkiness of expressing self while trying to understand  what’s all around.

“Eye shopping” The ever- present importance of “eyes” to Asians is bubbling on the tongue here. Wait a second… maybe in Konglish only we can shop for new eyes for ourselves. Or imagine Korean university students with their minds swinging back and forth, communicating in English while expressing themselves in their modern Asian world where appearance is becoming everything: “Eye Shopping” it is.

Anyone who has spent any time here in Korea understands that Konglish is rarely the lazy use of language. “One Shot” is really a good example of how Konglish encodes the universal English tongue with the local drinking culture of Korea, and so it goes.

And as “One shot” is a good example of how Konglish happens then “Fan Fic” is a good example of how Konglish is happening. “Fan Fic” means Fan-fiction. And Fan fic is the short form name to a club or group of middle school girls making up stories about their favorite pop stars and then sharing them on an Internet site. What rocks this is that many of “Fan Fic’s” members cannot pronounce the back-to back f-sound in English, so it is usually pronounced as “Fan Pic.” Now everyone on the planets has by now heard Korean pop-stars and watched the videos, and do these performers seem to fit more the “fic” as in fiction or the “pic” as in picture? Either way “Konglish” has it covered.

And by the way even a “toefl-breath” knows that language also offers more than what meets the eye or ear really. Who isn’t blown away by the understanding-the-other-side-of-the-world-moment when it dawns that the Janglish (Japanese form of Konglish) phrase, “saving face” has a more psychological meaning than a physical appearance one?

Anyway whatever you conceive in it, Konglish with all its convolutions is really so direct and unique, it gets you between the eyes and goes right through the skin. As native 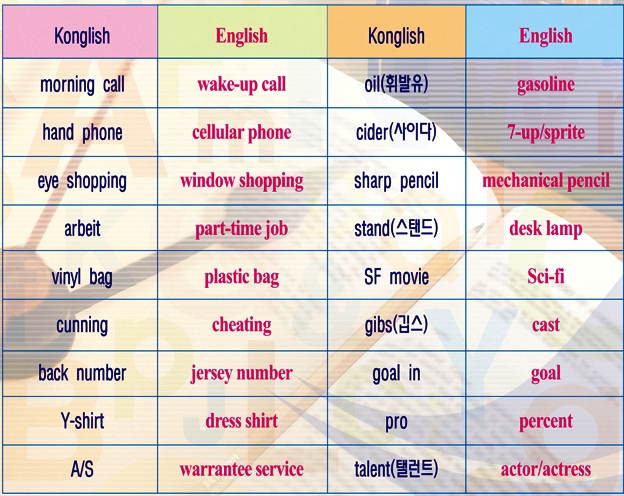 speakers we experience the difference of it when we hear it or read it and if we are English teachers we face the dilemma in fixing it, but before any of these, instead try to experience it before it is gets written down or spoken; right at the moment it is being conceived. The following Konglish is a list of descriptions taken from a cross-section of Korean University students.

These mixed descriptions are of how friends feel about each other.

–His strong point considerate and kind hearted. His weak point is weak and simple minded. When talk free sympathy always on each other’s speech.

–The friend is woman, I am man high school. Contact did not hardly dropping so.

–Su-Ji and me talk or see comic book all night if meet. Because he is short and plump and face is round, potato doll the same. If see, to hug.

–We often quarrel because with each other weak-eyed make a rush for film seats. My friend is ox-eyed and body grew gaunt very and face is smallish. So hear often speech that occur prettily.

–We don’t know how we are best friends. And personality is very urgent.

–She go to an orphanage, and old people’ home and a disabled protector all time to the rest.

–My life lie in pain and he performance me some order or so much that did ability excel.

Can you sense it? Konglish is a work of art in jumbled disguise. Even if it comes from a direct translation from Korean to English, it is never stillborn or annoying.  In its beauty of expression it seems closer to lyric Greek poetry than any academic could ever hope to get. Maybe there is the rub and the worry about Konglish. It won’t get anyone a comfy university job or fast-track a government official to a high position. What it does do is offer an ecstasy that is anything but technical.