HomeEXPAT LIFEDancing with Nietzsche— A tiger, a bear, a lot of soju and an MTV gig

Dancing with Nietzsche— A tiger, a bear, a lot of soju and an MTV gig 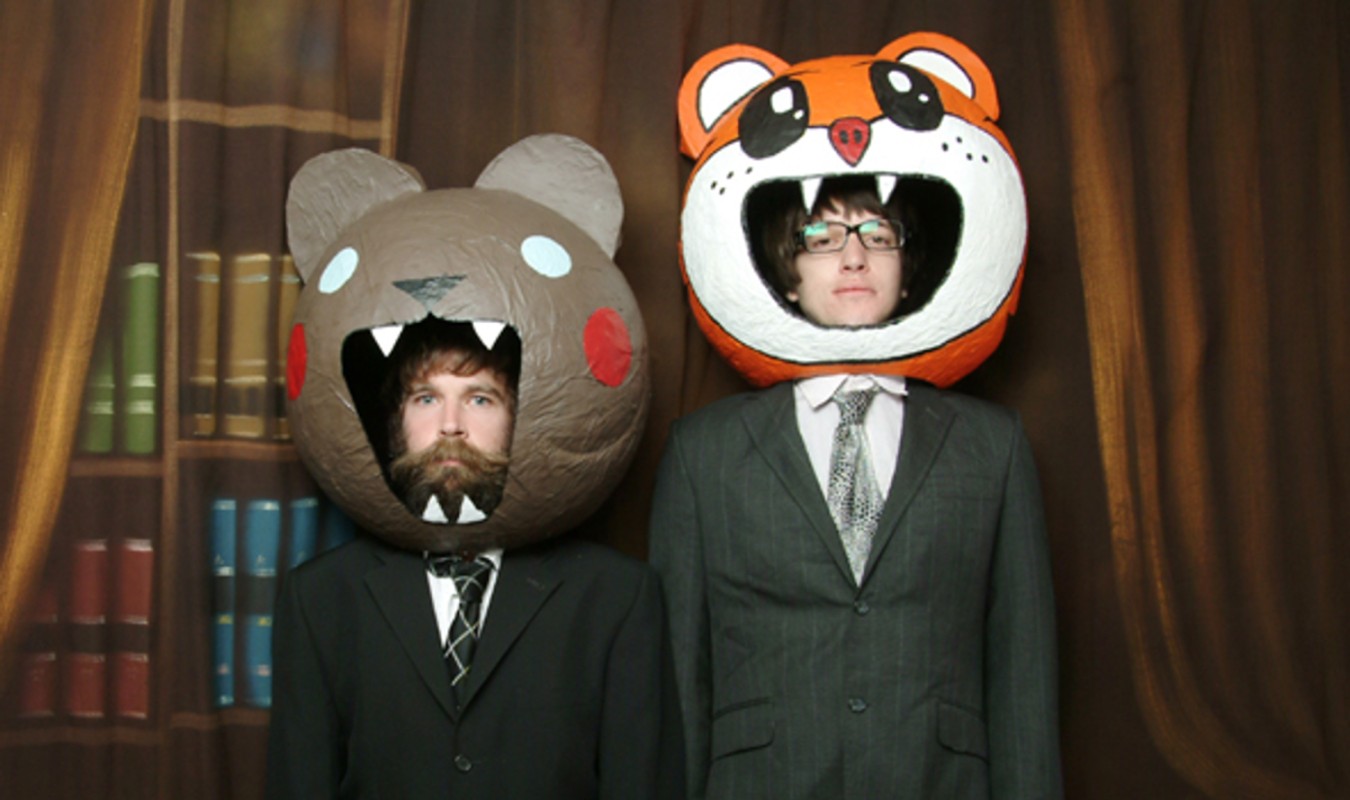 By Tiger and Bear
An introduction

Dancing with Nietzsche is based on mythical events.

It is neither fact nor fiction; instead it is an account of two performance artists named Tiger and Bear, who had been influenced by the old Korean folk story of the same name. The myth of tiger and bear tells of the birth of Dangun and the founding of what we now call Korea, a geographically and politically divided nation. The ‘performances’ in the following story holds little relation to this original folk story.

Act One: The Taxi

It had to start somewhere and so it started in a taxi, rumbling along the highway. Its headlights cut into the darkness, the Korean driver saying nothing. In fact he didn’t even seem aware of the two of us in the back seat.

There was me, Tiger, and next to me Bear. I had my giant tiger head on and he had his bear head on too, both of us in our suits, mine a little too small, Bear’s a little too big. We were both wearing dark sunglasses.

We had left the city an hour before and were heading straight for the JAMESER music and arts festival, hosted in a town nestled amongst the mountains somewhere in the Republic of Korea.

We were sucking on the periscope like straws that protruded from the soft drinks we had bought at a burger shop, each cup concealing half a bottle of soju — a dreadful clear liquid reputedly consisting of ethanol diluted with water to create ruin in a bottle for W1500. A soju excursion always came with the inevitable consequences of mass destruction and experiments in lunacy. We were dead serious about this particular adventure, so we’d purchased over 20 bottles just to make sure we wouldn’t be caught short. 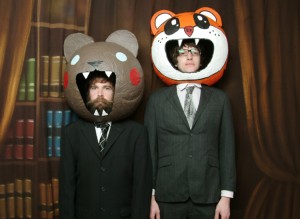 The taxi hurtled along the asphalt and delved into the night like a chuck of discarded metal burning up as it reentered the Earth’s atmosphere. Hubcaps missing, silver paint turned grey with grime and dirt, black streaks and scratches running along the doors from too many close encounters with other vehicles. The windshield was decorated with a collection of flying insects that would have made the curator of a natural history museum jealous. The back of the taxi was dim, occasionally blasted with dirty orange light as we passed under a street lamp, instantly disappearing behind us into the plume of black exhaust.

Despite the decrepit air conditioner blowing cool air from either side of the driver the atmosphere inside was hot and sticky, the stench of stale sweat and mould filling our nostrils. The aroma of sweating bodies not used to the humid Korean summer was becoming more pungent with every passing second, as big wet patches blossomed under the arms of our shirts, complementing our slackened ties and heavily stained trousers that suggested various misadventures. The specks of dried blood on my shirt sleeves were an ugly reminder of the most recent.

My paper mache tiger head was far too big for the low roof of the taxi, forcing me to slouch over, whereas Bear was shorter and therefore could sit up straight. His rucksack, filled with green soju bottles, was sitting between his legs, held in place by foot enclosed in his lace up leather shoes that were covered in silver paisley swirls. My battered lace up white sneakers rested on top of my leather satchel, also bulging with bottles.

I could only see the back of the drivers head, seemingly erupting straight out of his shoulders. His jet black hair was shaved into a perfect line along the back of his head, an army green baseball cap perched on top, matching the zip-up netted olive colored sports vest that he wore over his dark track purple suit. I could see a thin sliver of his face in the rear view mirror. His tired eyes were sunk into his skull, wrapped in deep wrinkles that were filled with the luminous green light emanating from the arcane dials and meters of the dashboard.

Out of the window there was only darkness and the occasional eighteen wheeled monster roaring past. Beyond the lights there were no cities, towns or service stations, only the rolling emerald mountains. In the day time the lush green trees rolled as far as they eye could see, disappearing into the misty horizon, rising over the mountains and falling into the valleys, interrupted by only the occasional Hanok. Rarer still were the temples with their huge iron bells, decorated with lotus petals and dragons.

Out here there were no stop signs or McDonalds. No apartment blocks sprouting from the earth, no floods of neon, no metropolises built from mail order DIY kits. Out here we were in the home of the tiger and the bear from the story of Dangun; Hwan-ung— the son of the God Hwanin– coming down from the heavens and offering the two beasts a chance to come into the human realm and  walk on two legs in exchange for enduring a hundred days of solitude, garlic and mugwort. (And he ended up marrying one of them and having a son named Dangun, the founder of ancient Korea.) It was because of this story that we had chosen to create this performance project. By burdening ourselves with giant paper mache heads we sought to imagine the tiger and the bear emerging from the lush green mountains after thousands of years, walking into the cities of vitamin supplement stores and plastic surgery clinics, how they would react to the Korea of today. At least in theory that was the intent, because whenever soju became involved the end results tended to vary wildly.

Our mission for tonight was clearly set: Get to the festival, get on MTV Korea and create a myth for ourselves. Soju and cigarettes would fuel and ignite the ensuing bonfire of our collective vanity, the inferno of our performance, the fire storm of the after parties, the apocalypse of hurling television sets out of hotel windows into the swimming pools below.

Our art was of different kind, unexpected and savage. The festival organizers had asked for a description in advance, including a start and finish time, which demonstrated that they couldn’t really grasp the nature of our project. What they had failed to realize was that here, in this taxi already working our way through 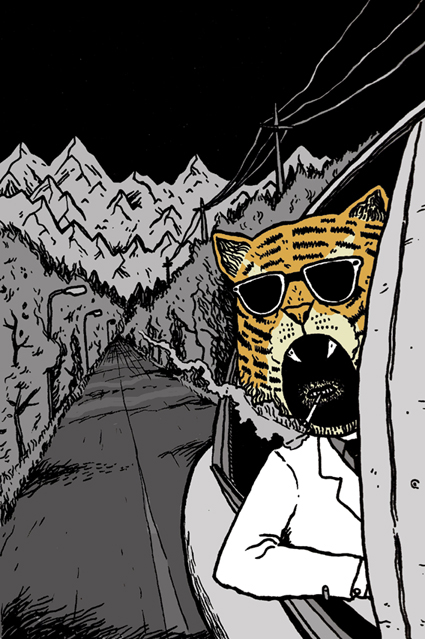 the soju, our performance was under way. Our co-performers had not yet been cast but we were comfortable with the idea of auditioning the parts as we went along. We didn’t know when the performance would end but we already expected it to conclude with a massacre of some kind. Until that point we had the intent to involve everybody and everything we encountered along the way in order to create a true carnival of carnage, where no one was allowed to be excused. Our lives over the next 48 hours — that would be our art.

Already I was feeling anxious. We had less than two hours to reach the festival and to get to the main stage for a performance with PoGo Planet, a Korean disco rock outfit, which we had figured was our best shot at getting MTV’s attention. I was anxious because while this was our big break I couldn’t stop my mind from flickering to other things that I could be doing, like guzzling cheap Korean beer over a smoldering grill filled with Korean BBQ.

Previously we had been discussing Bear’s employment history and his stint as an agricultural worker and how many animals he’d killed. For the past few minutes he had been contemplating something while stroking his beard. He turned, blinked slowly and said,

“One time there was a lamb born with a hole in his head. All this gunk was oozing out and it kept bubbling at the hole, like its brains were falling out. So I had to take a hammer and I…”

Bear stayed silent, evidently irritated by my interruption. He took a soju bottle from his rucksack, unscrewed the cap and poured some into my soda cup while I held back the plastic lid. I took a deep and long slurp on the chemical alcohol mixer as he continued,

“So anyway I took the hammer and smashed its head, but it was still breathing so I smashed it again and again, over and over until there was just a twitching pulp where its head had been and a dead body.”

I nodded and as I took two cigarettes from my jacket pocket, passing one to Bear and placing the other between my lips, I wound down the passenger window a little, fished a cheap plastic lighter from my trouser pocket, lit the cigarette and inhaled deeply. A fresh and much deeper pang of anxiety suddenly hit me like a brick in the back of my head. I began muttering, half to myself half to Bear,

“We missed the bus, had to leg it from…them… we gave all our money to this taxi driver, we’re getting plastered before we’re even got to the festival…”

Staring out of the window, I clutching the cigarette tightly between my index and middle finger, biting the nails of my other hand as the breeze kicked up my fringe.

“God has it in for us already, coming to cast stones upon us like the bastard children of Judas Iscariot,” I muttered.

Bear said nothing. After gnawing my nails some more I decided that rather than 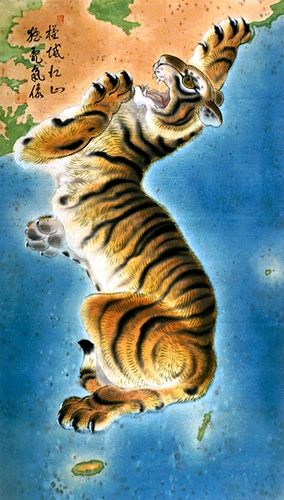 resist I should just let the impending doom wash over me, much like the soju seeping into my nervous system. Let them both dulling my perception, slaughter my mind and body, cast away my faculty for common sense.

After a while Bear spoke up again,

“So how many people will be in the audience?”

“When we’re on stage with, you know, PoGo Planet.”

“Do you think maybe a few hundred?”

“Right…how do you feel about that?”

I could tell from the tone of Bear’s voice that he was a little unsettled. I wound up the window and turned to him,

Gesturing to my soju mixer, which I shook encouragingly, I said,

“Just don’ think about it, keep drinking and you’ll be alright. Besides, the big stage is our best bet to get MTV interested. Maybe then they’ll do an interview!”

He turned away, looked out of the window and placed the soju periscope in his mouth.

It had to start somewhere and what better place than in a taxi, riding on a wave of impending chaos?

The driver briefly glanced in his rear view mirror.  I took a guess that in the shadows of the backseat he couldn’t see us with the exception of the heads; strange voices, scraps of garbled language and smoke billowing from the gaping maws of these two beasts. Ferrying two intoxicated demons into the middle of nowhere for a little over W120, 000 the driver surely had questions. Yet he simply shifted his eyes back to the road, focusing on the white lines disappearing into the oblivion of the night.

It had to start somewhere and what better place than here.

The G-20 from Street Level