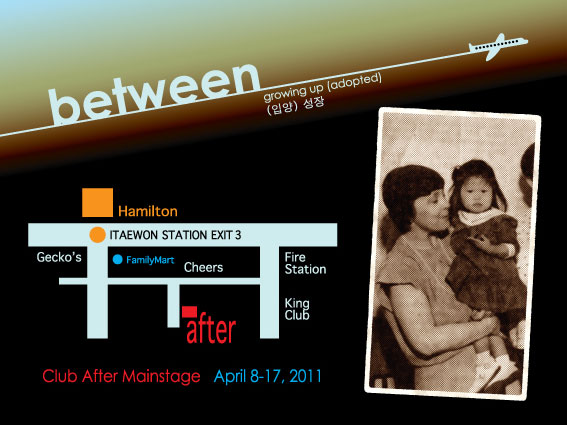 In association with Seoul Players: Amy Mihyang, New York actor and writer, will present the Asian Premiere production of “between” in April.

“Dear….mother.” How do you write a letter to the woman who gave you away 20 years ago? Combining adapted work by Asian and adoptee writers and Amy Mihyang’s original writing, “between” encapsulates her experiences as a Korean American woman, a New Yorker, and most of all, a transracial adoptee. Bringing the audience with her on the plane en route from NYC to Korea, the author contrasts her journey with the echoes of other adoptees and those touched by the act of adoption. Mihyang makes us ask ourselves, “Do we need to know where we came from in order to know where we’re going?”

The Seoul production will be fully translated into Korean and English with the use of projected supertitles.

All proceeds will go to the Korean Unwed Mothers & Families Association (KUMFA), the only Korean group and network solely created and run by unwed mothers. It provides financial assistance, guidance, and resources for unwed mothers and their families.