HomeFrom the SceneKorean College Tuition Protests: NOT My Father’s 1980s 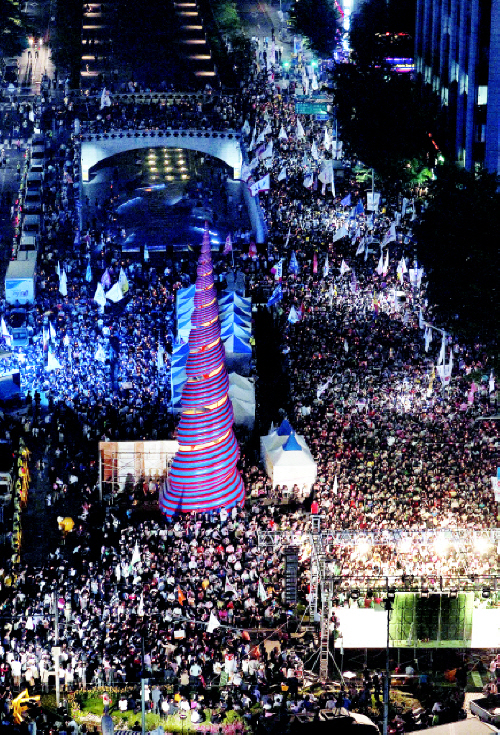 I am a second-year college student who, like everyone else in Korea, has been keeping an eye on the current situation regarding tuition and the demonstrations that have been taking place in Seoul. Personally, my father was one of the people who led the protests against the government back in Korea’s chaotic 1980s. It seems like my grandfather was worried that the “blood” might be running through my veins because he called a few days ago and asked me if I was joining the protests. I said, “No grandpa, I was not on the streets, I’m not on the streets, and I don’t plan to go, either.” And I did not say that to comfort the old man.

Yes, we all want lower tuition, but not in this way. My university is one of

the four universities that went out to Gwanghwamun on the night of June 10th as the “representatives.” Beforehand, the student government officials held a vote asking students to choose whether or not classes should be boycotted on the afternoon of June 10th in order to attend the demonstrations.  Simply, did we want to skip class for the cause? The participation rate didn’t reach 30%. They couldn’t even open the ballot box because the turnout didn’t reach the mandatory percentage. What made people walk away? Is 70% of the entire university wealthy enough to pay nearly 10 million won every year?  Certainly not.

According to research by the Korea Student Aid Foundation (KOSAF), 13% of students in private universities in Seoul are borrowing money from the foundation which itself borrowed 8.35 trillion won in 2010.  The data say one out of 10 students all over Seoul is in debt.

The problem is the lack of communication between the entire student body and the student government officials. What’s been happening in my university lately is that the student government officials haven’t been working inside the university but concentrating on the outside so that literally nothing has changed since they got elected. Their original promises and election pledges included welfare of the students such as fund-raising for more scholarships, better facilities, approval for longer usage of facilities and so on. It’s almost the end of the semester, and nothing has changed. The student body has been showing their discontentment with the fact that the student government is working for itself, not for the whole. Everyone knows the experience in “leading” such a fight for students’ rights could be a promise for a brighter future—the question is what is the motivation?

Last week, our university paper published an article on the front page titled, “Student Government Has Lost Its Original Intention.” It struck a chord.  Many students read it, and agreed with it, and sent their support into the paper. However, the student government officials’ reaction was the worst one could ever imagine. There were swear words—like son of a bitch and the Korean equivalent of the “f” word—on the student board and on personal pages denying the fact that everyone except for themselves had turned their back on the student government (essentially, it was our fault). This was not the behavior of individuals who should be leading these protests for tuition cuts. If they want contentment, approval, full support and participation in what they are doing, they need to listen to the student body. After all, the student body has elected them over the others so they could fulfill our wishes to the university and the society. 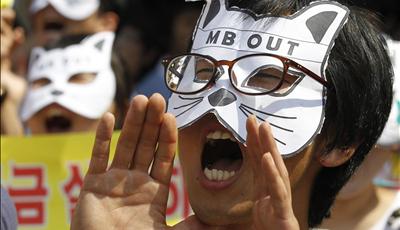 Of course students want the tuition burden lightened but at my school we are not willing to follow the blind lead of individuals who are using the demonstrations and protests to create a reason for their own personal popularity and existence.  The ignorant and arrogant connection to the 1980s protests where people fought for democracy against a dictatorship should be treated with disdain.  The public shouldn’t fall for the populist ploys of interest groups and student leaders who’ve chosen final exam season to fill the streets.  The original intentions are being hijacked (just look at the “MB Out” signs and the Anti-U.S. military protesters that have jumped on the bandwagon).  What the majority of us college students want is a calm and prudent approach to this tuition issue not some show.

Jihyun Kim is a sophomore at a university in Seoul where she majors in Chinese.  She is preparing to leave for the U.S. soon, and hopes California is cooler than steaming Seoul.