Branding Korea! How about Culture Shock Day with Mannam? (Pt. 2)

It was time for the laser show. The English announcement proclaimed 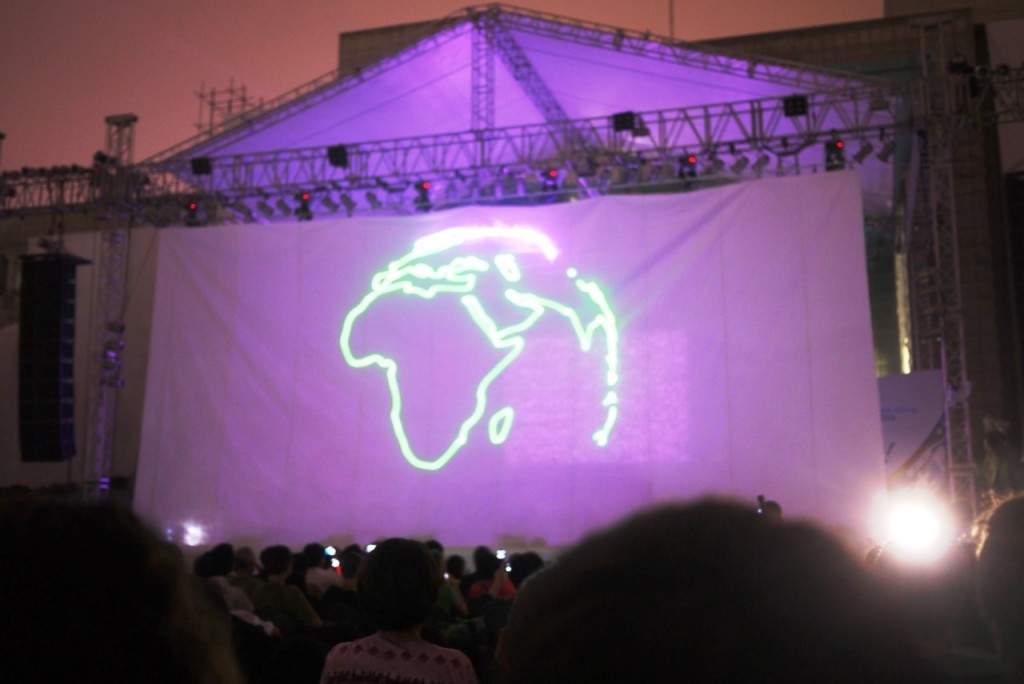 that it was the first of it’s kind in Korea, and even the first of it’s kind in THE WHOLE WORLD. The War Memorial building was draped in white cloth from left to right with a screen in the middle. It began. The lasers formed some coloured shapes (octagons, ovals, squares) and some selected countries. Then both Koreas appeared in the centre and their dividing line was blown up and destroyed. It was a really short show; short enough that I thought it was the intro to the show. And then it was over.


“Wow, it was truly something to remember,” the English-speaking host told us, unenthusiastically. (He always sounded overly rehearsed and a bit robotic as he praised each element of the show.) It was around this point, that everyone on stage started singing to We Are the World. During the second round of We Are the World, the president of the organization stepped up on stage and people started to go wild!!!! He was a tiny older man, wearing the same outfit that he appeared in in the pamphlet they gave us that day. I later found out that his name is Lee Man Hee. He gave a speech to thank us for coming and to say goodbye. Afterward, he read the Mannam manifesto. The hosts stopped translating at that point. Alex picked up a small bit in Korean and mentioned the religious content and how they spoke of God many times. The Korean crowd stood up, roaring. They were standing on any available chairs, waving about, or trying to get as close to the stage as possible. Their index-thumb ‘V’s were in the air and they were going ballistic over this man! The song must have played for the third time when his partner, (who was the also in the pamphlet) stood by his side to add another piece to the fucked up puzzle.  Happiness is a 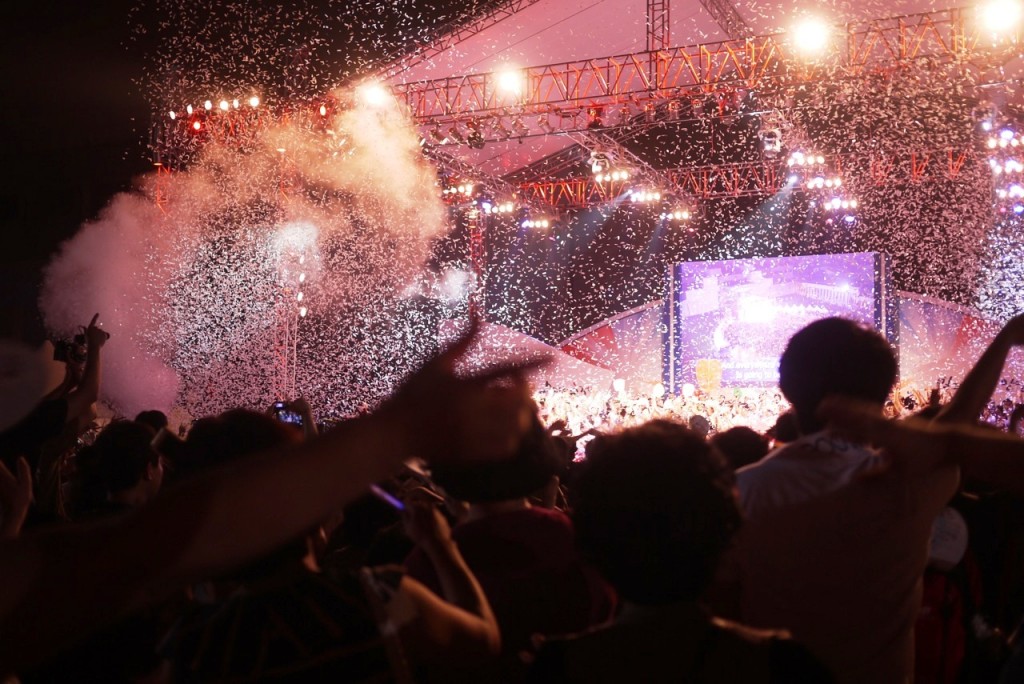 couple I thought.  It’s time to get outta here, we thought.

Despite the assumption that there would be fireworks, (Fireworks end every big festival don’t they?) we decided we had to go. Volunteers lead us into an area, which wasn’t the shortest way out of the place, and told us that there were free gifts for us on our way out. Instead of taking the same route we took on the way in, they guided us through another path lined with volunteers on either side to the ‘last-chance booth’. The free gifts were the bracelets and the pins, and it was their final chance to lure us into signing up if we hadn’t already.

Then we were directed through hundreds of bowing and cheering people that were lined up like they had been in the afternoon, but were now at least three rows thick. Before we were free, rows of what looked like airline stewardess’ all chanted, smiled, and bowed in sync on either side of us. Their chant was in Korean and was continuous. I’m sure the words were simply saying goodbye but it was a haunting finish. Volunteers and people shouted and waved at us randomly around the sidewalk, while we walked to our bikes. Even the people selling pineapple slices on a stick were in our faces and 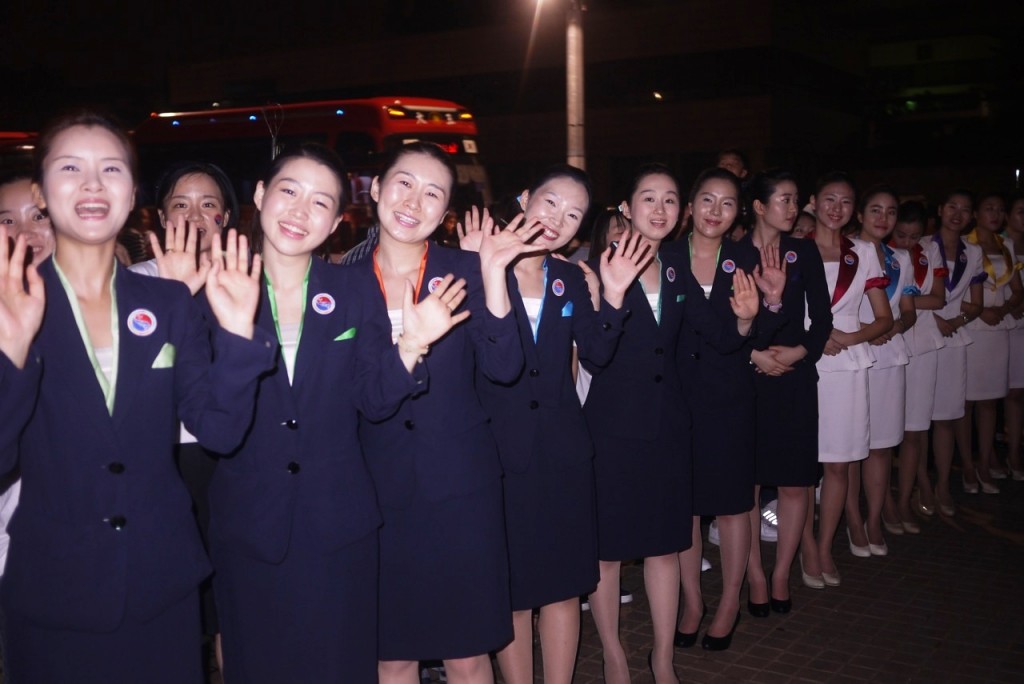 On the way home, my ears were buzzing and I felt like I could use a cold beer and enjoy some MUCH needed silence. My thoughts and feelings were all over the place. I recall thinking that Mannam was probably a religious cult. And then thinking, Wow, that would have been a disappointing laser show in the 70’s! I felt physically itchy and we all had the need to research whatever that was. My friends recalled that there were no signs of sponsorship throughout the event. We wondered when and if Mannam would email us. Of course they’re going to email us! Gah! I couldn’t stop thinking about the toll of appearing happy and smiling for hours on end, or how the crowd erupted and lost all control when Lee Man Hee walked on stage.

Mannam reached out to us through email, three weeks later.

The email’s Subject: For our Global Family.

An excerpt of the introduction:

Greetings to our dear friends from around the world,

We are all members of the international community who have come together to serve under the MANNAM Volunteer Association.

We are universal friends that have been born in one era; we are those who see the same sky, tread the same earth, and breathe the same air.

And we now live together in South Korea.

MANNAM (만남) is the Korean word for meeting or encounter. Our Mannam here today is no accident; it was meant to be.

If all the different nations in the world would come together and share their cultures with one another in a spirit of true love, we believe it would bring peace to our world.

The email ended with ‘Please write back as soon as you can’.

Nice sentiment! To have all the people in the world come together, join hearts and hands, and set an example for others. Being at that Mannam event was such an over-the-top display. The abundance of attention we received was often uncomfortable. It made me feel like I was having a nightmare about suddenly being famous and having to promote my music or film in a foreign country. After some Googling in English, I found it difficult to gather information about the organization. Also, their website was blocked and forbidden. It made me that much more curious (and even more unsettled). I Googled Mannam recently, and found their site working properly and available to the public. Mannam volunteers can sometimes be found in the touristy areas of Seoul handing out pamphlets to events to specifically seek out expats/foreigners. On one event flyer I noticed it read “Participants: All expats living in Korea”

I’m having trouble finding out a truth about this Volunteer Association but they seem to be making themselves more available so perhaps the truth will start to unravel. They have some Facebook pages if you’re inclined to dig for yourself. Searching in Hangul will bring up different results. Some other information, since info about Mannam can be difficult to seek out in English Internet searches:

Do a Google image search on: 이만희 만남
Kim Nam Hee  (김남희) is the representative and Chairwoman of Mannam 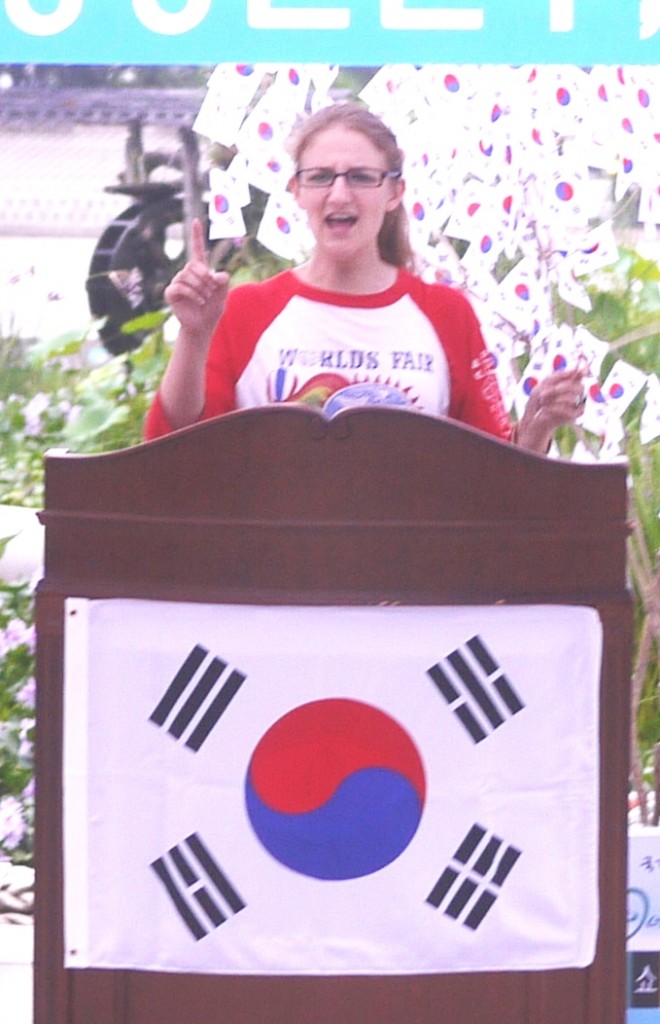 Kyla Polanski  enjoys spending her time trolling YouTube videos about quetzals.  Sometimes she wonders if she’s wasting her time when her comments are deleted:  “Will anyone ever make a decent video about those beautiful birds?” 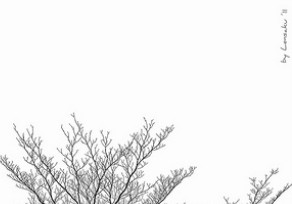 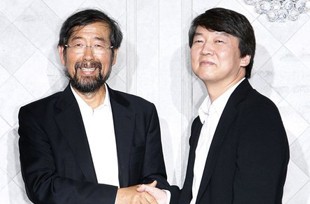 Ahn Cheol-Soo Forced out of Position at Seoul National University