HomeFrom the SceneMaking Kimchi with the Hong Sisters: A Tradition of Taste (Pt. 2) 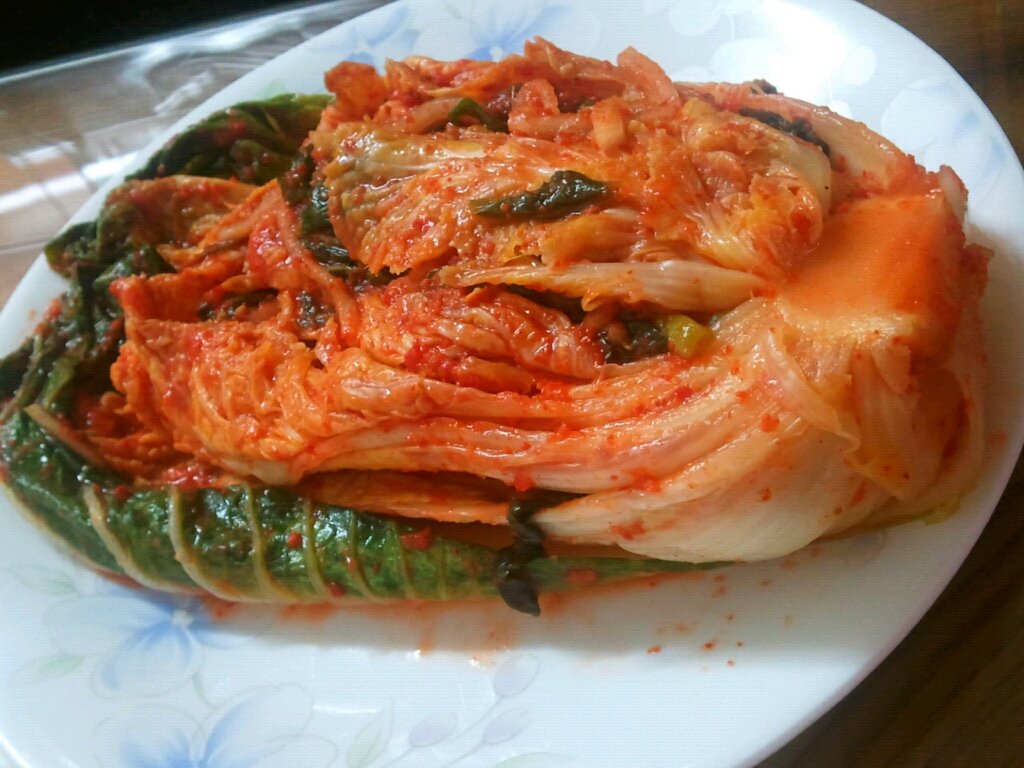 After a dinner of rice and fresh cabbage with ssamjang, a bean paste mixed with a bit of pepper paste and garlic, at around 9 p.m., the three sisters resume work. Jin-Ok does the dishes while her younger sisters wash and skin the radishes and ginger in front of the TV on a low table on the floor. They discuss the plot of the soap opera they are watching.

“Why doesn’t she just chuck him in prison for adultery?” complains Young-Ok.

“No, imagine,” says Young-Ok, “what would you do if you found your husband cheating on you?”

At 10 p.m., when Jin-Pyo gets up to leave, his older sisters see him out to the door, bombarding him with advices on how to find his way back home. He vigorously explains to them that his smart phone has a navigation application and that there is no need to worry. The mass of harsh intonation of Kyeongsang dialect move out the door to where his car is parked. Then, after the car has driven away, the mass of the sound rolls back into the house as the sisters bring out the special board with blades embedded to cut the radishes in thin strips for the peppered spice to go into the cabbages.

“If you sit like that, you’re not going to be able to work for too long,” warns Jin-OK.

Jung-Ok claims that she is better off working with one leg folded under her while the other knee is brought up to her chest to help her balance. Jin-Ok shakes her head and gets started. Young-Ok, sitting on th 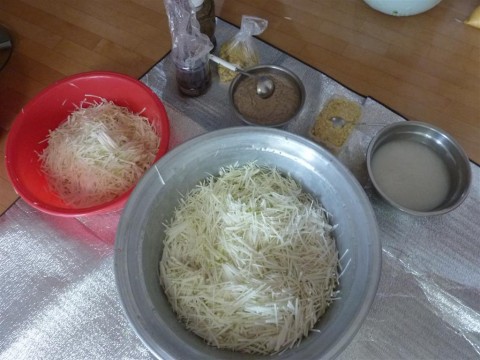 e other side of Jin-Ok and absorbed in the soap opera, quietly works away with her radish.

By the end of the day’s episode of the soap opera, a dramatic theme song fills the living room and the trailer for the next episode runs on TV. Now, the sisters are done with the radishes and they put them together in one big plastic bowl like the one they used for the process of pickling the cabbages and covered it up with clear wrap. The day’s worth of work is finally done. Jung-Ok stands up to pull her arms over her head and stretches. She feels her bones in her spine cracking with each stretch. Young-Ok is already lying on the sofa. Jin-Ok is gathering up the utensils. Then, Jung-Ok bends back down to carry the bowlful of thinly cut radishes to the kitchen. The radishes are left on the dining table with clean wrap to cover the top of the bowl. The Hong sisters will use the radishes to make the peppered spice for the kimchi. One by one, they take turns washing and changing to go to sleep. The gossip and chatting until now was just the beginning–now starts their sisterly sleepover.

Around 9 a.m. the sisters come out to the kitchen, one by one, for breakfast. Jin-Ok trots out first to prepare a breakfast of toast and fried eggs with coffee. Young-Ok and Jung-Ok change back into their trainers and wash up for the day. They all want to finish up and go to the jjimjil-bang, a public bath with various dry saunas of different temperatures.

As soon as they finish breakfast and clean up the dining table, each sits back down and starts on a portion of making the spice for the kimchi. Jin-Ok and Young-Ok peel the garlic that their mother sent them from home along with powdered red pepper. The Hong sisters are from a village deep in the mountains in South Kyeongsang Province where their parents still produce such goods which they occasionally send to their daughters.

In the meantime, Jung-Ok grinds the ginger so that it can be added to the spice. All the while, the topic of their discussion is the goods they get from home and how they are much better than those at markets.

“I once bought powdered red pepper to make a bit of new kimchi and it dyed whatever it touched red,” says Jin-Ok. “From your skin to your clothes, without exception.”

“The bean paste from the market looks great, but if you leave it out for too long, it starts to go black,” complains Jung-Ok.

“You can never compare the quality of mom’s goods to the ones in markets,” says Young-Ok.

“You’re right,” says Jung-Ok. “We’re used to mom’s goods which have no preservatives.”

“When you think about it,” says Young-Ok. “It’s also environmentally friendly. They don’t use any insecticides.”

Soon the garlic and ginger are both ground and they are finally ready to make the spice for the kimchi. They add the garlic and ginger to the enormous plastic bowl with the radishes from last night. Then, Jin-Ok measures with her eyes the amount of pickled shrimp that they will need for seasoning. With each spoonful of the whitish-pink miniature shrimps, she looks at her sisters for approval. The tricky part of Korean recipes: nothing can be measured out of measuring cups; all the measuring relies on intuition. However, the good thing a 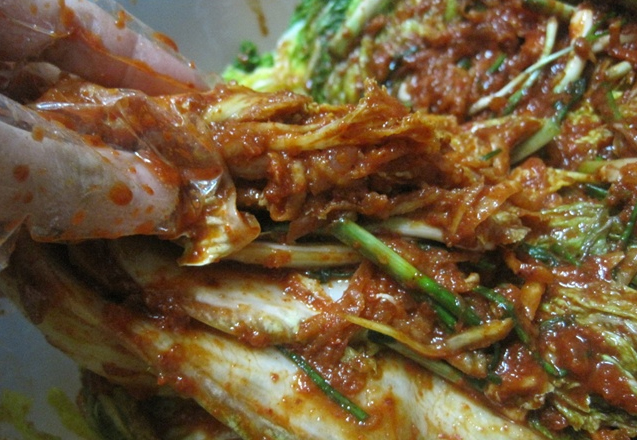 bout kim-jang is that there is always someone to confirm the measurements.

The same goes for pickled anchovy, the thick brown muck with a stench. It is amazing what goes into great food. Young-Ok nods and Jung-Ok nods and slurp goes the pickled anchovy. Afterwards, as Jung-Ok, the strongest, pours the pool into the enormous bowl, Jin-Ok and Young-Ok put on plastic gloves to mix the ingredients together. Once the ingredients are well mixed, Jung-Ok, who does not have the plastic gloves on yet, sprinkles the powdered red pepper and sugar by fistfuls. Then, Jung-Ok, too, puts on plastic gloves to help mix. When the spice has finally gained its rightful color, it is ready.

Young-Ok gets up to clear the living room and covers the floor with newspapers. She sets three enormous plastic bowls with plastic boxes big enough to hold six quartered cabbages from each of the sisters’ houses next to the bowls. This is so that after smearing the spices to the salted cabbages, each can put the kimchi in their boxes to take home.

The sisters get started. Jung-Ok, always hardworking, gets a move on and meticulously throws little blobs of the spice into the various layers of the cabbages just as she had done with the salt. Then she smothers the blob on the leaves to help spread it out. Jin-Ok, doing the same, admires the way Young-Ok is working. Young-Ok, who is usually the sly one, trying to wriggle out of working, is getting much more done in a shorter amount of time. However, her techniques seem no different from what her sisters are doing.

While they compliment Young-Ok on her skills and talk about their marriages in lowered whispers, the five hours of adding the spice to the cabbage flies by. They skip lunch and occasionally take short breaks for snacks such as cookies and leftover coffee. When they finish, they rinse out the enormous bowls in the bathroom and lean them against the wall to dry. The kimchi is now ready for fermentation for those who enjoy mature kimchi. For others, the freshness of the ki

mchi is also a delight.

They quickly get out of the trainers, drenched in the smell of various ingredients, and throw them into plastic bags to take home and wash. Then, they get in Jung-Ok’s car and speedily drive to a nearby jjimjil-bang. After a quick shower, they change into the shorts and shirts that the jjimjil-bang provides. With shik-hae, a sweet drink made of rice, they head for the salt room with a temperature of 64 degrees Celsius and sit there with their drinks. They continue on with the never-ending gossip and talk about their marriages.

“This is the tradition,” says Jin-Ok after she has returned from the dry sauna. “Before the days of jjimjil-bang, we used to go to the public bath, but now, we go to jjimjil-bang. It’s good for relieving stress and getting rid of the muscle aches.”

The process of kim-jang, passed down from at least the beginning of the Chosun dynasty in the late-1300’s, seems to embody the traditional ideology of highly regarding collaboration and cooperation. Kim-jang is not just a tedious project to secure a nice side dish for the winter. It is a means of gathering together the women of a household to let them share their worries and sorrows, their troubles and happy memories. It’s a collective therapy where every participating member is the therapist and everyone is the patient. It’s a therapeutic process despite the bodily aches that persist throughout. 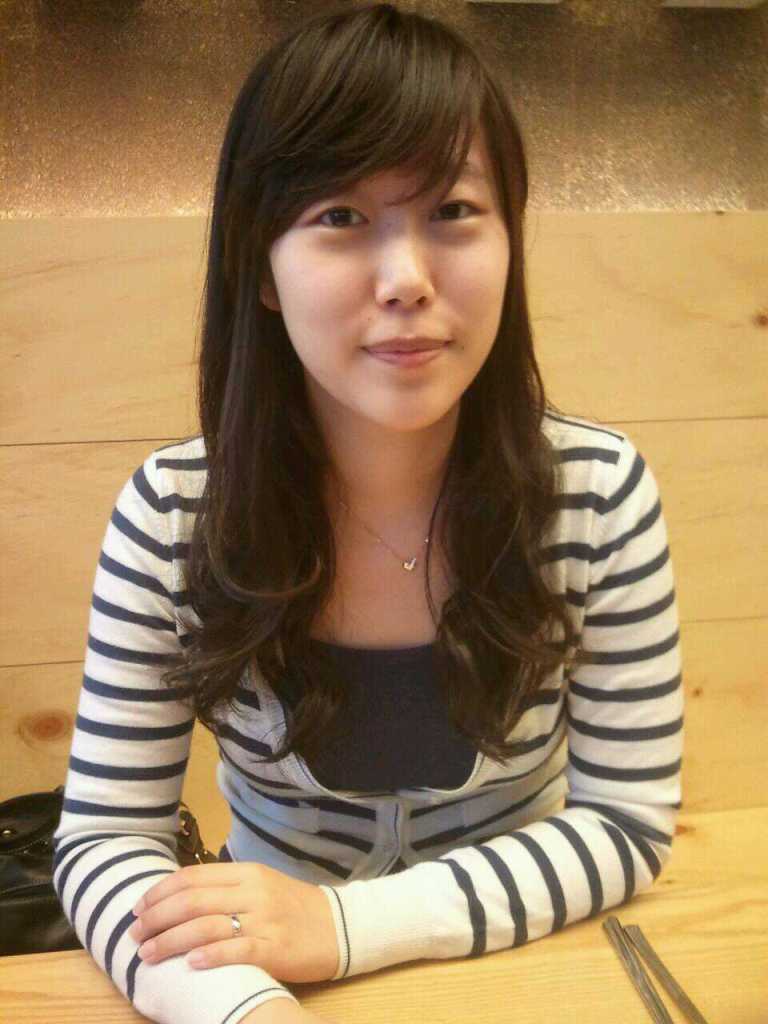 Pick Your Korean Pleasure (or pain): Going to the 노래방