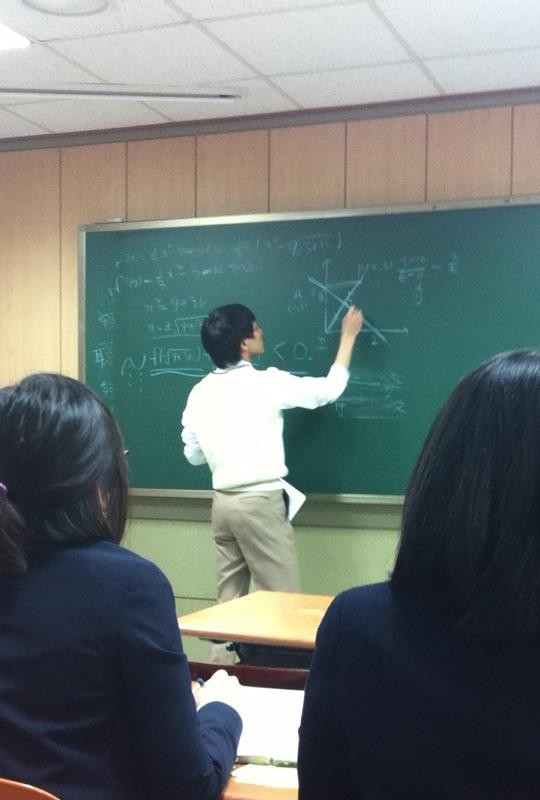 Halfway into my senior year, I decided I’d had enough. After spending two and a half years in high school trying to keep up with my workload—sleeping erratically, eating comfort food at night to stay awake, and spending the rest of my time glued to my seat hunching over piles of books—I could feel myself slowing down both physically and mentally. My joints creaked whenever I moved. My mind was constantly groggy. So I decided to perk myself up by working out. From that day on, I woke up at six in the morning and jogged for an hour at a gym near my house before going to school.

The first day at the gym was slightly disconcerting, though. It was hard not to notice I was the only non-adult. People sneaked glances at me none too secretively, with curious looks on their faces. Later on, as I was changing back into my uniform in the locker room, a cleaning lady approached me and asked what grade I was in. “I’m a high school senior,” I told her. I watched her eye me up and down with a quizzical look on her face—probably trying to figure out whether I was a total genius who didn’t have to study, or a complete failure who had given up on life. Because in Korea, that’s what high school seniors do: they study.

The students at my school are hardly an exception. There’s no magic formula to how our school has maintained the highest national average for Korean SAT(suneung) scores for several years running; it’s just that teachers and students alike take studying to the extreme. Students use a different school building starting from senior year, sequestered from the hustle a

nd bustle of freshmen and sophomores. Seniors are excluded(or banned, to be more accurate) from most school events including field trips, sports days, and festivals. As suneungs approach, guys stop shaving. Girls stop washing their long hair—all so that they can pour their undivided attention into their studies. From morning to 10:30 p.m. when school finishes, students sit and cram.

Of course, for me and my other friends in the English department, things are a little different. Since most of us aim to apply to foreign universities, we do not have to take the once-in-a-lifetime suneung (the Korean SAT) test. That doesn’t mean we have it easy, though. In my case, for instance, I started off this year with January SATs. The day after SATs finished, I launched into intensive cramming for five AP subjects (most of my other friends took more). Then came mid-terms in April, SAT IIs and APs in May and June, and finals in July. On top of that, there was homework, volunteer work, and club activities squeezed in between. It was hectic. I never want to repeat the process again, even if it meant a straight ticket to Harvard—which I doubt it would.

However, the greatest source of difficulty during such hard times came not from tests and scores, but rather a creeping sense of inferiority. Throughout my three years at Daewon, I often caught myself comparing myself to my classmates and it was hard not to feel insecure. There were national pool debate champions, economics Olympiad winners, music prodigies, ballet concours medalists. There were people with higher GPAs, more APs, more extracurriculars. Then there were also the rich, the better-looking, the more outgoing. The list was endless. I felt proud to have such friends, but at the same time I felt slightly lightheaded to realize that these were the people I would ultimately have to compete with. After all, top American universities do not accept more than a few students from one school. My friends were my rivals.

But I have no idea what I would have done without them. One would imagine cut-throat competition in such an atmosphere, but that was anything but the case. During mid-terms and finals, for instance, we upload study materials online to help one other get good grades. Those who ace in certain subjects help others who lag behind without expecting anything in return—our math whiz actually gives after-school lectures to a classroom full of avid students to help them understand particularly complicated questions.

The emotional support is also great. I can’t say about the others, but in my case I was able to identify most easily with friends within my own school department. After all, our schedules and goals are completely different from our peers who aim for Korean universities: while they live and die to raise even a mere decimal point of their GPA and suneung scores, we take it (comparatively) more lax with GPA and instead concern ourselves with other board scores and club activities. When they’re well-rested and refreshed, we’re knocked out after a night’s worth of AP cramming. When we have time to play, they’re busy fretting over suneung tests that we hardly know about. Of course, such differences did not prevent me from being friends with students aiming for Korean universities, but they did make me realize how easy it was to talk to friends in my own department in comparison. Having people to empathize with over a bad literature essay score without having to explain the specifics of a Petrarchan sonnet, or people with whom I could count on to have mental breakdowns with on facebook at two in the morning over lists of yet-to-memorize CR vocab words to be quizzed the following day was great. Plus, we all come from more or less similar backgrounds, share similar goals(studying abroad), and spend more time together than we do with even our own families, what with school, volunteer work, extracurriculars, and academies. In retrospect, I guess it would be strange not to bond with such people with interests and values so freakishly similar to my own.

The mutual support reached its peak during college application season. One of my seniors once told me that the school workload during senior year is much less than that of freshman or junior year; too bad she didn’t tell me the psychological burden is infinitely heavier. As college applications became a reality instead of something in the distant future, all sorts of worries came flooding in. Time to finally face the grim reality of Bs in math dragging down your GPA, and wallow in self-reproach at not having studied harder for SATs. Or perhaps wonder how in the world your middle-class parents are going to pay $50,000 a year for your tuition, and ask yourself whether you really have the right to ask them for such a big investment in your murky future. Whether it be low GPAs, financial problems, or indecision on where to apply, everyone has worries of their own.

I was no exception. Three months before early application season, my parents broke the news that they could no longer afford to send me to an American university due to family problems. Since I had always taken for granted that I would leave Korea for college (and my parents had backed the belief), the sudden change of tide was a great blow. I felt like all I had done for the past few years was for nothing. With the scores and activities I had prepared over the past few years, my chances of getting into a good Korean university were much lower than that of being accepted by an American university—even my parents openly acknowledged that point. The sudden loss of my long-nurtured goal made me feel empty and lost. My sullen attitude made any family time at home strained. I spent most of the rest of the summer avoiding my parents, sitting absent-mindedly at quiet cafes.

It was only after opening up to a few close friends about my situation that I was finally able to pull myself out of my own mire of self-pity. Though they probably were busy—it was the last summer before college applications, after all—they spent hours talking things over with me. They kept me company when I wanted to be someplace other than home. They sent me random texts to keep my spirits up. But what’s more, they approached the situation rationally and reasoned out the benefits to be gained from studying at a Korean university. They also advised me to try to putting myself in my parents’ shoes and make an effort to understand what they were going through. Listening to their sensible words made me realize how immature I was being in comparison. I snapped out of my moping, and started preparing for Korean university applications in earnest.

Thanks to their support, some intense cramming, and probably also a considerable amount of luck, I got into my school of first choice. After squandering a couple of weeks in lethargy after completely finishing my applications (resume, essay exam, interview and all), I just felt extremely relieved to see my name included on the accepted list, posted on the school’s website.

I thought I’d live a worry-free life happily ever after if only I got accepted, but I’ve begun to realize that is very sadly not the case. I did enjoy a few carefree weeks idling time away: taking a round-trip bus around Seoul on a whim, watching more dramas than I have during my entire three years in high school, and sleeping until my back hurts. Eventually, though, new challenges and problems to attend to surfaced, ushering in new worries and anxieties.

I guess that’s just life—a never-ending stream of challenges to face. And as difficult as high school was, I guess it was but one of countless challenges to come. I’m just glad that phase is all over. I wish the best of luck to my friends waiting for their regular results, my Korean-university-bound friends still half into their regular applications (the latest of them finish in February), and of course my friends who made the courageous decision to jaesu (spend another year studying to take another shot at the next year’s suneung exam). I also wish luck to next year’s soon-to-be seniors. If I may give them one piece of advice: don’t sacrifice your health for your studies. Pulling an all-nighter or skipping lunch to cram for a test may admittedly have some advantages in the short run, but it’s just not worth it in the long-run. These days I spend a great deal of my time going to hospitals: no matter what department I go to they all tell me I have some sort of problem, from scoliosis (from sitting at a desk for too long) to astigmatism (from straining my eyes) to so-called normal weight obesity (I guess morning exercise alone wasn’t enough to compensate for an otherwise completely sedentary lifestyle). Studying is important, but take care of yourself as well. Work out a bit. If you’re worried about what nosy ajummas will think about a high school senior wasting time not studying, come to my gym. People there are now used to strange students who have their priorities all wrong… at least, I think.

Bo-kyung graduated from high school on February 6 and will begin her first semester at Korea University in March.