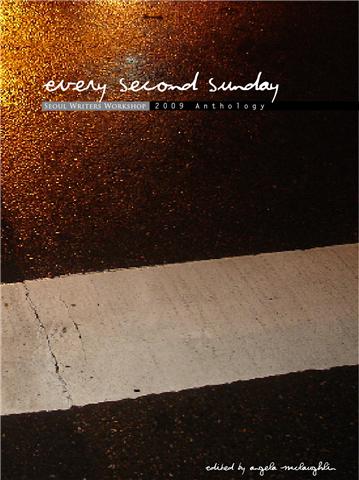 Review by Mizaru
I hadn’t had a full breakfast when I picked up “every second sunday”,  the 2009 anthology from the Seoul Writers Workshop and I was late for the free food at this book launch as well. So on an empty stomach: in an October that had been too hot is to this winter that has been real cold, I scowlfully expected this expat project to be a usual suspect production. An extended list of blog entries of silly string writing on how cool it is to be here in Asia crisscrossed by therapeutic treatises on how difficult it is to live far away from home while here in Asia.
Is there enough muse and enough lack of pretention and ego to put out a book of writing culled from creative writing workshops that are run, “every second sunday”? Well, for starters Over 70% of submissions were not taken and those that were are included by author alphabetically. There is a sense of professional purpose in this transportable 118 page paperback and there’s none of the bleary standard fare of  ‘my friends and I put this book together for anybody to check out’, which is  otherwise known as the ‘schlock factor’.
This second yearly anthology edited by Ang McLaughlin,  is by no means a fierce incandescent look into expat life in Korea, yet nor is it the worst  that can be expected: a stack of expats-talkin-smack at Korea and compiled as an I-am- here- vanity publication
The anthology has its share of festering purple America to it, “Hoyt’s Anger Relief Ranch”, about a small pay-to-wreck, “Breaking Barn”, that disgruntled folks can come to and smash away at, or burn something till they feel purged has the disturbed-like-Chuck- Palahniuk- flavor to it, but so what, hopefully the author will be even more ingenious next time around and look to show off the purple streaks of life in South Korea with the same short and physical language.
When you live in a place so vastly different then what you have known, it is natural to somehow want to get a square hold on the differences while at the same time come to a reckoning that the people you live around are not merely exquisites to entertain you and not just the idiots who get in your way: are these the Korean-majority views of foreigners? “Chingo Chingu” by Jorge Miramontes is a must read in the anthology for one thing by the name of the story it seems the narrator might not be from an Asian or Occidental culture himself (whatever the hell that means) so that everyone in his short story starts off on equal footing and there is an immediacy of place and an intimacy with characters which should really be what expat story tellers aim for.
Shortly into the story the narrator is being drilled by a Korean companion, “Why did you come to Korea?”
I kept quiet for a bit wondering if I should tell him that I, like most other ex-pats that came to Korea, was running away from something: The mob, the ex, Obama, ourselves… from life. Sure we all convince ourselves we’re running towards something. But I decided to go with the standard.  And later in the same scene:
… and after a longer pause still he went out to the twilight zone. Stopped in the middle of the street, looked in my eyes and asked: “what do you think of Divorce?”

To get at the expat experience here in South Korea the poems in this anthology work particularly well. For one thing most of us over here are at some level teaching English and there are many poems in every second sunday that distill well the classroom experience. My favorite:  “Little Saint from D2 at 3pm”  by Vanessa Falco:

…Something in the way he laughs too much at his own answer brings me to
stillness.
I am like the heron that I pass each day,
Unmoving in the rice field-
Pure grace on one foot.
To bear no shame is the only miracle,
He tells me with his arms, outstretched,
Handing me my shell.
“Teacher, it is not ocean-sound. It is 바다소리”

“Inwangsan” by Jeremy Loveday captures well both the prurient foreigner hipster struck with an Asian fever and later a harsh call out to the same hipster when the fever breaks and the reality of dislocation sets in:

… “ I am Western Lion. Come to feed on your women.
I am totem of tree rooted in stinky streets and spicy noodles.

Feed me world for I am hungry. And later in the poem…

He wishes he could spend out his days here above this city that will     never be his own.

Typing words about things he cannot capture in a language not meant to   describe them.

Of course the book carries its’ share of new age jabberwocky and is occasionally tattooed with some of that, “Look  at me ma I’m in Cambodia and I don’t need clothes,” Oops I mean. “And I don’t need money” pleasure seeking drivel. But it’s not at all overrun by it. Mark Lyon’s “Day at the Races” seems to me the kind of creative writing which offers the ripest rewards to an expat reader. A short story with local names Choi—a bachelor in his twelfth hour before a reluctant meeting with his would be wife and “Lee Yeong Cheol. Manager/ Marriage Consultant.”
Lee shows Choi the underside of his b.card  which reads:

Lee shows Choi the underside of his b.card which reads:

I remember a time when melodrama of arranged marriages and Asian mail order bride references were some of the original fodder for American late night TV humor. Now after living over here for awhile and hanging with locals who are not living their lives for us foreigners, who would still snicker at that because it’s so farfetched?
In the story Choi (his briefcase lost) continues to ride Subway number 2 (the circle line) with an expired subway ticket and in bafflement about whether to marry his would be bride who everyone seems to think is a perfect fit for him. This story like the writing mentioned above and the majority of what’s offered in every second story can be summed up in two words:  Absolutely Asia…
PURCHASING INFO:
What the Book, Itaewon.  Cost is 8000w.or email seoulwriters@gmail.com.  Free shipping in Korea.
Will be available on Amazon.com shortly. You can also email Seoul Writers Workshop at the above email for how to participate in the workshops.