HomeReviewKorean Food for the Hapless—Look Ma, Here’s Where They Make the Doenjang! 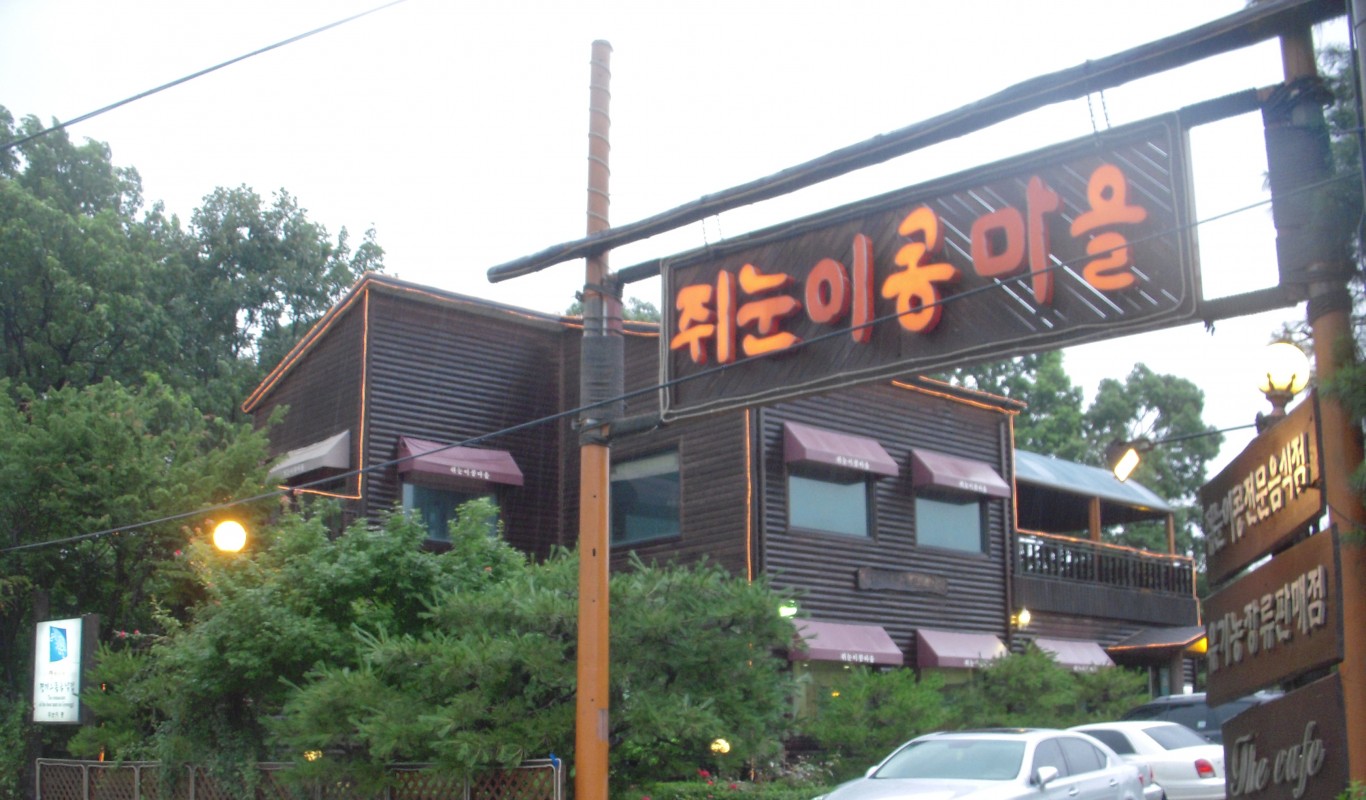 On the northwestern edge of Seoul, about halfway to Ilsan on subway line 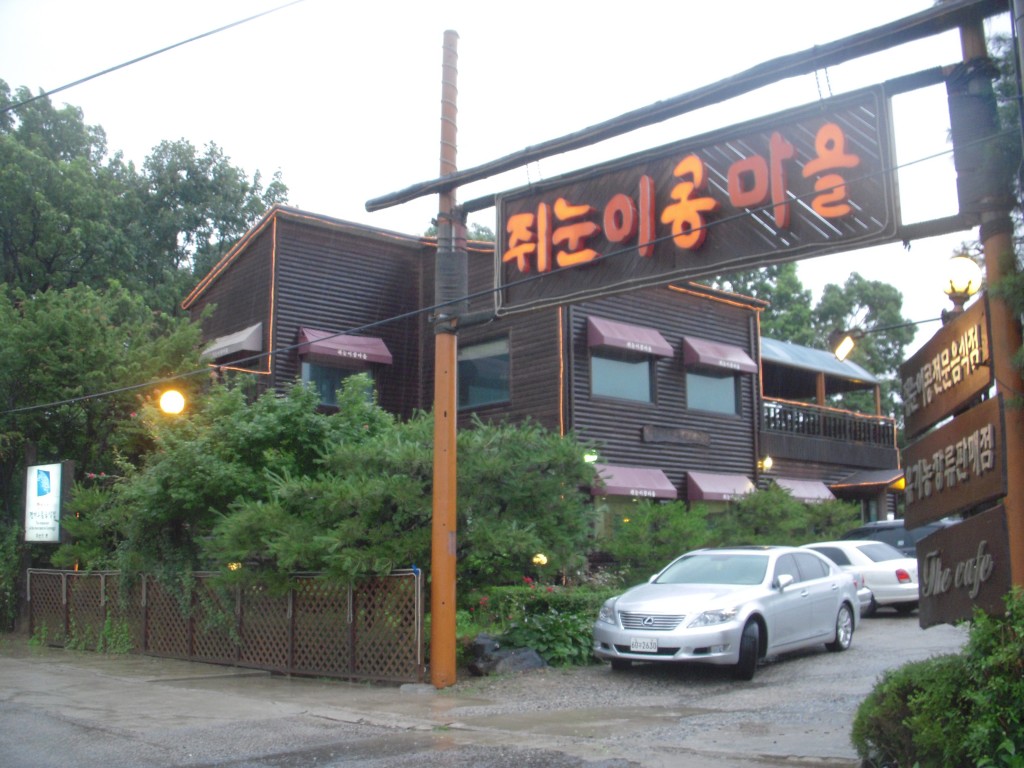 three, there is a suburb called Goyang that is home to a wonderful little cluster of farms and specialty restaurants. There’s an herb farm, a mushroom farm, the tipsily entertaining Baedari Traditional Wine Museum and makgeolli brewery, and outdoor grill restaurants specializing in just about any kind of meat you can imagine. Up the road from all of these locations is a complex with the English name Beantown, housing a bean farm, a coffee house, a shop selling an impressive variety of homemade soybean pastes (doenjang) and chili paste (gochujang), as well as the only live turkey I’ve ever seen in the Seoul metropolitan area. Front and center in this delightful complex is a restaurant serving foods produced on the farm.

Beantown is a prix-fixe restaurant, and while it is possible to order menu items a la carte, no one in the restaurant seemed to be doing so. The manager on duty when I visited spoke enough English to describe most of the dishes, and recommended one of the two daily set menus, both of which center around the fresh farm produce. My date and I chose the simpler menu, which did not contain a seafood dish and cost ₩16,500 per person for a larger meal than two relatively hefty eaters could comfortably eat.

The prix-fixe menu we ordered began with a sal 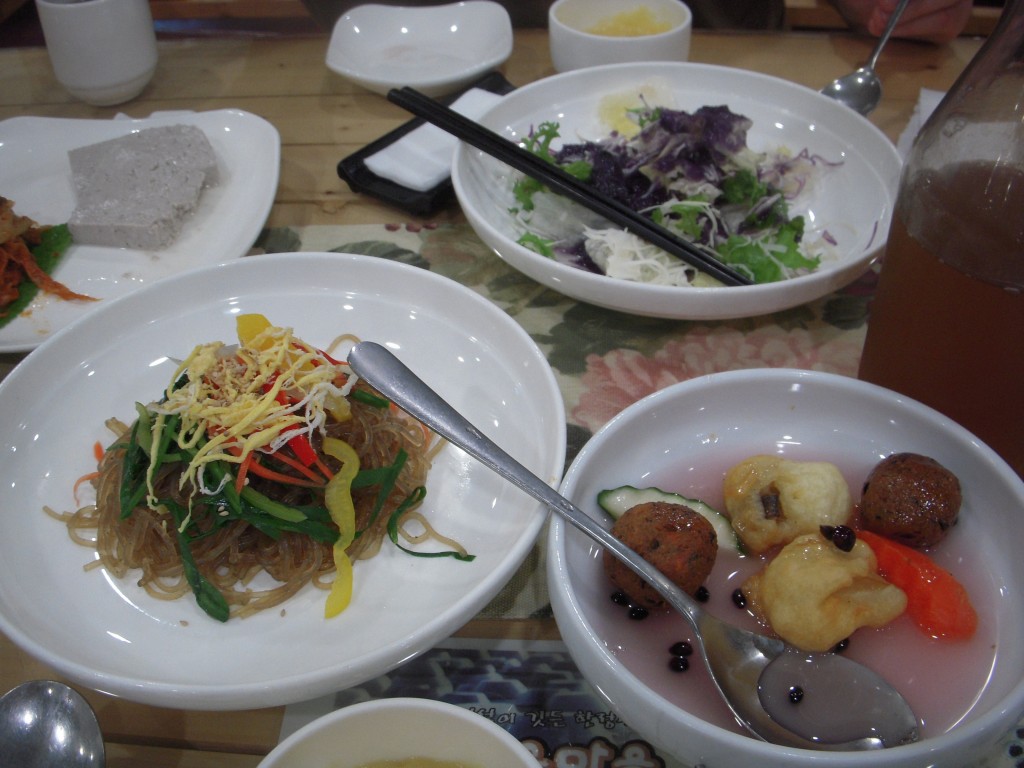 ad with blueberry dressing so tangy and refreshing, it was tempting to eat the whole thing quickly rather than saving it as a palate cleanser between bites. Next came homemade bean curd just firm enough to enjoy with a topping of braised kimchi, or a bite of one of the several varieties of fresh kimchi on the table. Besides the usual cabbage version they serve spicy bamboo shoots, spinach, and pickled sweet potato tops, all of them fresh and crunchy (life is too short to eat mushy kimchi, after all!).

The carbohydrate options varied in quantity and flavor. The rice flour dumplings rolled in a nutty powder and clear noodles stir-fried with vegetables were generously proportioned, but bland. The crispy mung bean pancake was tasty, as one might expect at a bean farm, but was eclipsed by what appeared to be falafel balls and tempura bamboo shoots in a tangy berry sauce. I wasn’t able to clarify the actual composition of this dish despite a very accommodating wait staff, but whatever it was, I wish they served it all over town. The other standout was a dish of thinly sliced raw potato “noodles” with a creamy garlic sauce so addictive, I used the remains of the pancake to salvage the remainder of it from the plate.

There were only two meat dishes in the basic set, both of them easily identifiable. The beef dish resembles Western meatloaf, including a red glaze a bit reminiscent of my grandmother’s, and was one of the blander offerings. The ham was tender, not too salty, and—in my carnivorous opinion—the best small dish on the menu. Then, just when I was about to release my belt a notch, they brought out the soups. The more traditional of the two was a brown soybean paste soup made with their own doenjang, which according to my date “tastes like a mountain river smells” (he meant this as a compliment to the freshness). The other was a white bean soup that tasted 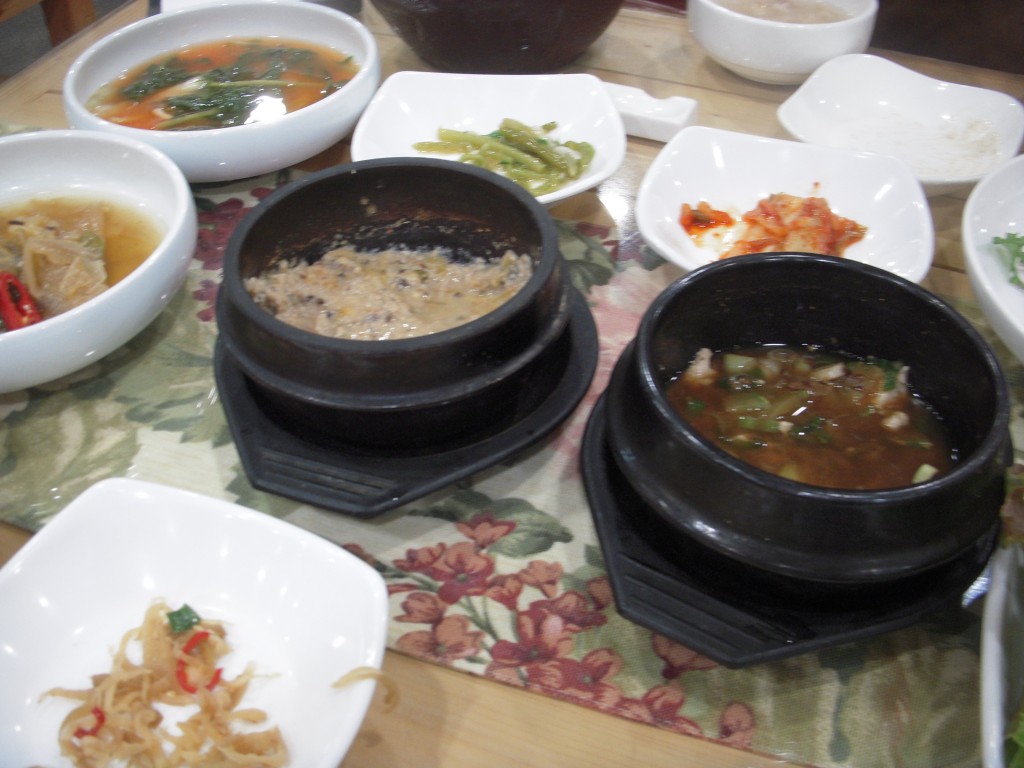 similar to Western versions and was delightfully hearty on a rainy evening, though I would caution vegetarians that I suspected the presence of more of that wonderful homemade ham in the broth.

All in all, Beantown is well worth the trek—and it is a trek. Even if you live in the northern part of the city, getting out to Beantown can be a hassle. The easiest way to get there is probably to take the orange line to Wondang station and take a taxi (10 minutes/₩2700). On a nice day it’s a lovely walk, lined with rice and vegetable fields, but the area is not well lit at night and not all the roads have sidewalks.  You can find Korean-language directions on the website (www.yakong.co.kr), and a link to the Google map here:
View Larger Map 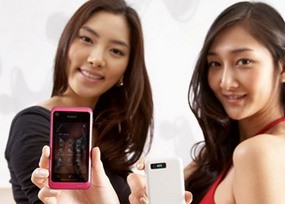