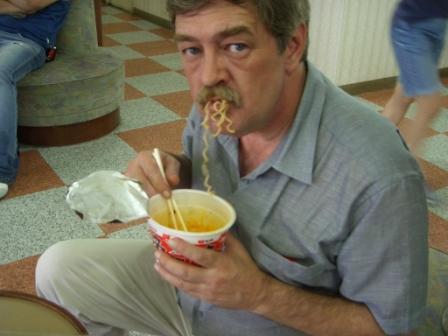 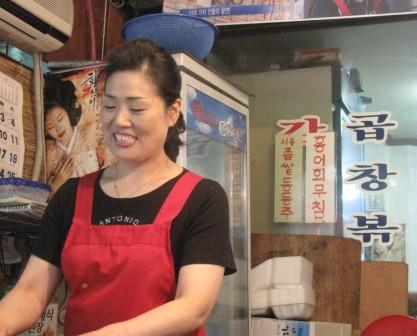 The woman frying up the bin dae ddeok[1] in front of me doesn’t mind that I’m taking her picture, and several times she even stops her work to pose for me a bit. She’s had her picture taken here before. The banner behind her displays still shots from an SBS-TV segment featuring her tiny shik tang here at the edge of Ahyeon Market, and she’s wearing enough make-up today that she might be expecting to be under hot lights again. (Not to worry, I seldom use the flash on my little point-and-shoot, and almost never with people. Too distracting, and rarely yields results that are kind.)

I do get the impression that it’s her shop, and the other two women are her employees. They are all dressed in black tees under bright red aprons, but she carries an air of command about her, proprietary and confident. I also suspect, but cannot prove, that the women working alongside her wear similar amounts of cosmetics at her insistence, or at least her instigation, and I wonder if it happened because of the TV spot.

Her product, if you’ve never tried it, is a coarse pancake, often served with some other substance mixed in (oysters, ground pork, seafood) along with chopped onions. You slice off bits with the thin metal chopsticks and dip it into a small dish of soy sauce mixed with more onions and red pepper powder. I think it goes well with beer, but older Koreans prefer having it

I know of a long-standing venue near Gwanghwamun that is always packed in the evenings with educated professionals that serves bin dae ddeok in several variations, and nothing else. It’s one of the few places I’ve seen it being sold that was not in the vicinity of one of these open-air markets, though, or at a place where elderly gather. And makkeoli is becoming a trendy choice among certain segments of the younger population of late, a way to show a kind of solidarity with a (no doubt fanciful) image of a Korea that is gone: agrarian, bucolic, a simpler and less stressful.

That Korea was dead and buried long before the Olympics were held here back in ’88, of course. We won’t see it again, and despite the nostalgia some Korean people might attest to having for it, in truth, few would really want it back.

The woman with the big smile and the bright red apron has the premier position near the entrance at one end of this open-air market, a part of town not far from the city center. It’s not the least bit modern-looking, and aside from the tiny oasis provided by this stall, I’d wager the market itself hasn’t seen a lick of refurbishing in decades, perhaps as far back as the years of dictatorship. It’s not quaint, or cute, nor does it embody tradition in ways that preserve “traditional Korean values,” whatever they are.

It’s just old, and a little musty. And, doomed. Though some of these places have held onto the same bit of real estate since the era of feudal kings and yangbans, they will not likely survive this century.

I almost never buy things at these places, not the ones so far from my own neighborhood, though the atmosphere available in them fascinates me. Dozens are scattered around the city, favorite haunts for photo buffs such as myself, as we are bound to find something exotic and only semi-explicable and often grotesque. The one here in Ahyeon-dong not far from Seodaemun, can be safely passed over, and in fact I’m probably the first foreigner to have strolled through in a good long time. I had never even known it was here until I stumbled across it one afternoon, though I’ve been teaching in the general vicinity for nearly five years now. 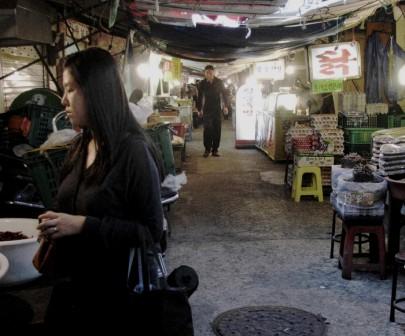 The lighting is dim in some parts, blinding in others, with the flat blue-whites of fluorescents far above or the hot yellows of bare incandescent bulbs suspended and swinging free just above your head. You find yourself thinking of dust, and germs, and small insects, and then you find yourself finding them. These are places that seem to call out for black-and-white photography exclusively because there is so little color anywhere that it’s likely to look that way anyhow—dirty places, inelegant and dark, dark even in the daytime and dark despite the electricity or the stray shafts of sunlight leaking in from small overhead windows. The tiny stalls are crowded and cluttered, and for the most part are full of things you can certainly afford but probably don’t want to own. They are not clean—yeah, I think I mentioned that—and despite the things I’ve already said about television and the proprietor’s fondness for cosmetics, the fact is that I sat down on the bench in front of her establishment, and not at any of the others. It wasn’t the endorsements by a television food program that enticed me, but rather the fact that it looked adequately well swept and frequently wiped-down.

Two elderly gents sit at a folding table across from me in the courtyard. They are playing baduk and drinking from paper cups, and one of them wears a cap that marks him as a veteran. That one lifts a cup in my direction, smiles and gives me a thumbs-up with the other hand. I smile back, lift my beer glass in return and snap a few pictures but I know better than to get roped into a conversation. If I encouraged him just a little, he’d want me to drink some makkeoli with him (can’t stand the flavor, sorry) so he could thank me for being an American and kicking out the Japanese and 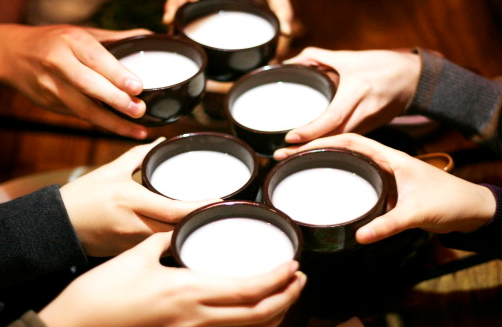 protecting his country while helping destroy it in a proxy war between rival superpowers.

Even though modernity in the form of corporate supermarkets and convenience store franchises has permeated every part of this little peninsula, there are still a lot of such outdoor marketplaces to be found, often by accident, as I did this one. The large and famous ones, such as Namdaemun [3] and Dongdaemun, [4] will survive all civic urges toward urban renewal, at least as long as they continue to be described as must-see sites in Lonely Planet. [5] Every year, however, a few more of the smaller ones get bulldozed to make way for a shopping mall or high-rise, and when these places are gone, no one will put up a new or similar one elsewhere.

That’s not entirely a bad thing, of course. The truth about the past is that it was seldom neat, frequently unsafe, and often unsanitary. This place is particularly lightless, though it’s four o’clock in the afternoon, and all the hawkers have a desultory air about them, fully aware of how little they have on display that is likely to entice a wallet to open itself up and start talking.

I hate shopping, I should make that clear. Department stores and large malls simultaneously bore me and put me on edge—I could honestly imagine submerging myself and succumbing to somnolence while undergoing a near-paranoid panic attack. When I’m in such modern retail environments my primary desire is to get out, be someplace where not every tiny bit of the surroundings are just more human-made artifacts, down to and including the air I’m breathing. And it’s not just the large underground arcades that do this to me. Many of the larger subway stations, especially the ones deep underground like Jongno-3ga [6] can produce a similar fight-or-flight reaction. I sometimes kick around a theory that such large public spaces serve to acclimate human beings to a future that involves self-contained habitats, either underground to escape an ecosystem made unlivable by technological madness, or in orbital platforms or perhaps in multi-generational interstellar vessels. Yeah, I read science fiction, even at my age. So what? 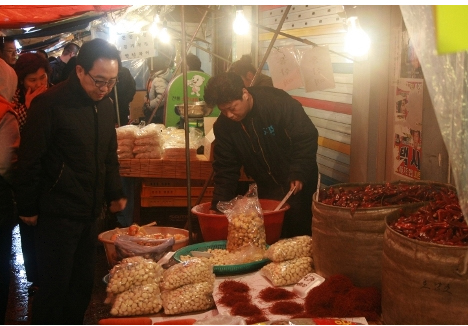 The old-style market areas, though, they are different. I have even felt comfortable. Such places epitomize what I have come to respect and admire about this part of the world, and what simultaneously maddens me – that so much is provisional, temporary, constantly open to renegotiation. It is exactly what so many of my friends hate about Korea, however. If you squinted your eyes, you could make some surmises at what Korea might have been like before it became the way it is. But it would only be your imagination.

Mainly, and this is why such places will not be allowed to exist in the future, you are brought face-to-face with the fact that other people are poorer than you, that they must work harder and get less in return. The problem with poor people lies not so much in the fact that they are poor, but rather that they are unattractive. It’s not a comfortable feeling, and that’s why modern Koreans will not find room for such places much longer.

Here’s what I love, though, every time I visit one of these markets: the constant activity, the visual stimulation, the sounds, the smells, the mixture of what sort of (kind of, a little bit) passes for tradition along with what definitely qualifies as the macabre. They are loud, and sometimes you’ll feel all your senses assaulted at once. It makes me think of … well, rock and roll.

The chaos of it all, the glorious mess. The sense that it all, every bit of it, could crash down around you at any moment, but that you’d escape unscathed anyhow.

It’s the rawest, most basic and primal form of mercantile activity. A guy says, Hey, I got this stuff. Give me some money and you can have it. Olmayo, you say, how much. He says a number, and you say, kaka juseyo, please give me a discount, and offer a different number. He says another number, between the two.

And the conversation goes on from there.

Some parts of this appeared previously in Bobster’s House

R.M. Adamson (a.k.a. “The Bobster”) was raised in the Wine Country of Northern California, a place which, by many forms of reckoning, is not all that far from paradise on Earth. He’s aware that Seoul is one of the ugliest, dirtiest, smelliest, most crowded and possibly unhealthiest places in the world, but he likes it anyway. Go figure.

An Irish Christmas from The Irish Association of Korea 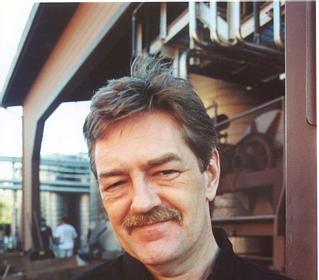 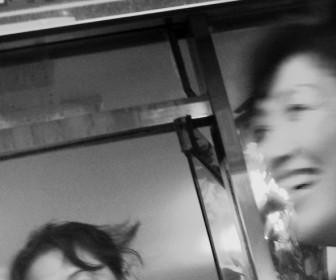