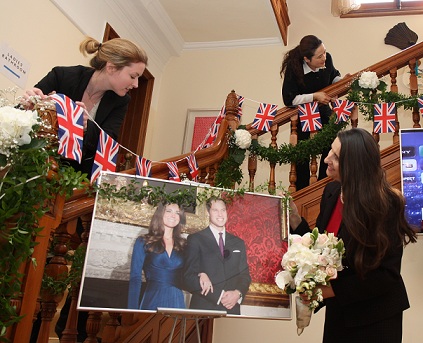 Part 3: This is the third in a series of blogs about the Royal Wedding this week, looking at what significance the event has in the UK and in Korea, as well as what we are doing here in Seoul to celebrate on the day.

Just how to celebrate the Royal Wedding has been left up to each UK diplomatic mission around the world, but since the 11 o’clock start time in London and the time difference of eight hours mean that the ceremony will start at 7 o’clock in the evening, it seemed natural to hold a reception in my Residence in Seoul on 29 April. We shall also mark Her Majesty’s Birthday at the same time.

As I write this, we don’t know how the weather will be in Seoul that evening. We will have something like 400 people attending, and even though we’ve moved most of the furniture from the ground floor of the Residence, it’s going to be very crowded if the rain comes and we all have to stay inside! We shall have three large TV screens, generously lent by Samsung, to show the wedding on BBC World, and in keeping with the fashion strengths of the UK, Cambridge Members are putting some suitably British-dressed mannequins around the house to lend a party mood.

Guests will be greeted by a Bentley as they arrive and the major local UK drinks importers (Allied Domecq, Diageo and William Grant) are providing their products to help the evening along. Even the Royal Mint are showing off their commemorative coins, produced to mark the event. Once Prince William and Miss Middleton are married, we shall raise three cheers for them and cut a specially prepared British wedding cake. But otherwise, we’re not going to have speeches, and will let the scenes from London speak for themselves.

r whom the British connection is of real importance, so not so many diplomats, but more Korean alumni from UK universities; all the same, demand is far out-stripping supply and we’ve had to explain to many good friends of the UK that there simply isn’t room for everybody! In fact, to make some more room in the Residence and allow more people to enjoy a British atmosphere while watching the wedding, the Embassy bar is holding a special evening for its members. In all, the Embassy in Seoul will be helping over 500 people celebrate the wedding, but I’m sure that many thousands more in the country will be following what’s going on with great interest, not least over the live Youtube feed.

Even though the Royal Wedding is taking place over 5000 miles away, it is still generating a lot of interest here in Korea.  There are many reasons for this and I’d like to highlight three in particular.   Firstly, Britain’s Royal Family have built up considerable links with Korean people over the last few decades. Prince Charles and Princess Diana visited Seoul in 1992 and opened the new building for the British Embassy. Prince Andrew has also been to Korea on a number of occasions over the last few years to help strengthen business relations between our two countries. In 1999, HM The Queen made a State Visit to Korea and actually celebrated her 73rd birthday in Hahoi Village in Andong. I visited Hahoi two years ago to attend a celebration organised by the local community to mark the 10th anniversary of her visit and was struck by the fondness by which her visit was remembered.

Secondly, the main topic of interest for Korean bloggers appears to be Catherine Middleton and her excellent fashion sense!  Bloggers and fashion magazines are talking about how to copy her style and are looking forward to seeing the wedding dress – which is being kept a closely guarded secret until the day itself. Furthermore, department stores in Busan and Seoul are selling a range of Royal Wedding china and memorabilia and the Royal Mint are selling official commemoration coins through their Korean partner Hwadong.

Finally, the wedding procession will pass by some of London’s most famous landmarks, including Buckingham Palace, Downing Street, Big Ben and the Houses of Parliament, which is sparking renewed interest in tourism to the UK. Visit Britain estimate that an additional 600,000 people will visit London on the day of the wedding itself and are expecting many more to visit in the months and years to come. To help Korean visitors plan their trips, Visit Britain Korea have set out their top 10 recommendations for those wanting a Royal-themed visit to the UK!

When I was posted in the US, I was often asked (especially when the film, “The Queen,” came out) about the significance of the Royal Family in modern Britain.  The answer I often gave was that they were for us a symbol of nationhood, much as the Stars and Stripes are for Americans.  In Korea, the closest might be Arirang, the best-loved folk song, played on so many public occasions.  To compare the Royal Family to a flag or a song may seem odd, but although we’d still be British, American or Korean without them, an important aspect would be lacking.  Whenever we see, or hear, these symbols we somehow feel a bit more British/American/Korean and age-old emotions can be stirred.  Not for everybody of course, but for many this is the case.

There is still an important difference in that the British symbol is composed of real people, and not geometric shapes or musical notes.  So we can share their sorrows and joys as though they were our own family – which in some sense they are.  For many British people,seeing Prince William and Catherine Middleton getting married therefore really does bring up feelings of happiness that “our” eldest son has found a lovely wife and the nation can celebrate that.

As a national event, the wedding at Westminster Abbey will be a mix of old and new.  The Abbey is on a site that has been an abbey for over a thousand years and the building is a UNESCO World Heritage Site.  But more than any other Royal Wedding before, this will have modern overtones.  The guests invited will represent many sections of contemporary society, including members of the Middleton family’s local community, charity workers and members of the armed forces. But it also has a strong online element.  Many people and organisations have started Facebook and Twitter accounts on the Wedding. There’s an official Twitter account – @ClarenceHouse and a hashtag #rw2011 that many people are using on Twitter. The ceremony itself will be live on many television channels worldwide, including on the ONStyle channel and BBC World News here in Korea,as well as on Youtube. There is also an official Royal Wedding website.

This is the first in a short series of blogs about the Royal Wedding this week, looking at what significance the event has in the UK and in Korea, as well as what we are doing here in Seoul to celebrate on the day. 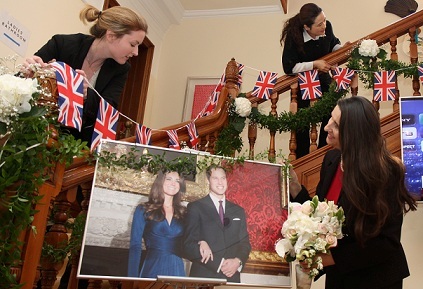 Why’d You Come to Korea?

3WM and the Association of Clowns