HomeReviewThe Hungry Dog: for Foodies Going to the Fest 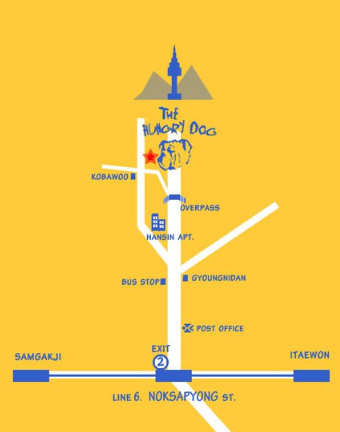 Last Saturday, I sat down at The Hungry Dog, HBC’s newest eatery, with a 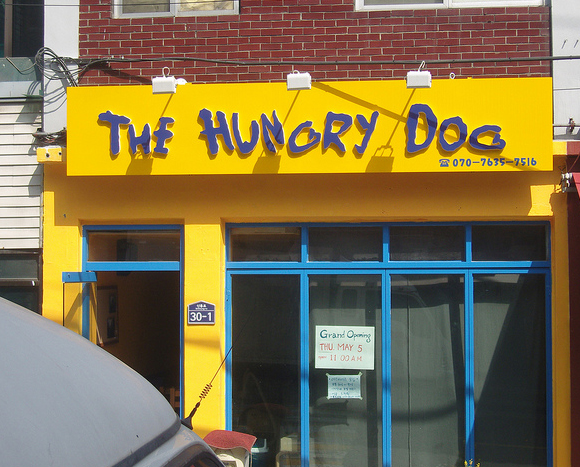 ravenous, sun-burnt clan of ex-pats. The Hungry Dog sits on Haebangchon’s main stretch, next to Pita Time. We almost overwhelmed the small, cheery restaurant’s limited table space, but the proprietors and staff Mj and Sunny took pains to accommodate our bulk.

The menu focuses on American foods: mini-burgers, sandwiches, hot dogs, and salads are their standard fare. They offer an all-day breakfast menu and a small dinner menu (dinner starts at 5). For dinner, there’s an intriguing souvlaki option, but we were too early to check it out. My infamously persnickety friend insisted that the lack of mayo in the condiments box be condemned; later, upon request, mayo was pulled out of the fridge for his fries. Critique revoked. The staff was very solicitous and friendly, and was open to altering the menu to suit our specifications.

As for drinks, several shakes were ordered, and all were declared thick and delicious. You can get shakes with Bailey’s or Kalua in them for a tasty (but possibly less healthy) alternative to a spiked coffee for mid-morning boozing. My picky friend insisted upon a caramel- peanut butter milkshake, which was not on the menu but nonetheless whipped up in his honor. It tasted like Reese’s Peanut Butter Cups and might cause obesity if consumed regularly, but it was nothing less than mouth-watering. My mouth actually filled with saliva after I drank it because my glands were stimulated by the divine taste; I’m not using a figure out speech.

The Hungry Dog also has a number of beers on tap and a small wine selection. You can get free cups of water at the counter, which we did, repeatedly—the patio was open and the sun beats down hard on the tables. They’ve also got your standard array of soft drinks and juices available.

As a Chicagoan, I felt compelled to order the Polish sausage, touted as a Maxwell street-style dog. For those born outside the Windy City, “Maxwell Street style” means grilled onions, pepperoncini peppers, and mustard—absolutely no ketchup. The Chicago Polish sausage is generally grayish-brown, thicker in diameter to a normal hot dog, and made of a mix of beef and pork. At The Hungry Dog, the toppings were as authentic as they come, but the Polish sausage turned out to be a regular beef hot dog. They might have mixed up my order with the Chicago Style hot dog, which is also on the menu and is almost exactly what I was served. They also have hot dogs catering to New Yorkers (Coney Island) and other parts of the United States.

I highly recommend the edamame hummus and vegetable plate. The edamame is pureed with the hummus, resulting in a tangy, creamy, unique spread. It is by far the best hummus I’ve been served in Seoul. It has the perfect consistency for spreading and tasted like whoever made it knew what they were doing, and did it well. I’m also a huge fan of vegetable plates that come with fries, like this one. My co-diners also gave hearty thumbs-up to the Greek salad. The sandwiches are solid, but not spectacular (the turkey rye didn’t come on rye bread, but the turkey was sliced with admirable thickness). The pickles served as garnishes for the sandwiches are dill, not sweet, in staying with the American style.

The breakfast menu at The Hungry Dog should be a huge draw for the restaurant. They have very cheap coffee (1.5) and its Starbucks brand at Tim Horton prices should entice barrista  crowd. Moreover, they offer ready-made hot breakfast sandwiches at very reasonable prices. The Hungry Dog opens early (7:30 a.m.), so HBC residents looking for breakfast during the morning should be very pleased, as most other eateries aren’t open yet. One of my co-diners tried the pancakes off the all-day menu; they were perfectly cooked and saturated with syrup in the best way possible.

The Hungry Dog has exemplary shakes and pretty good everything else. If you are Polish, don’t be offended by their current confusion about what your sausages look like. They mean well, and it’s a really nice place to sit and people-watch on a weekend. 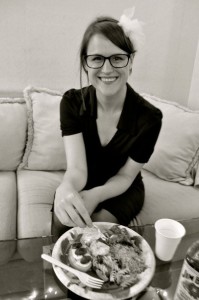 Kate is a teacher and writer living in Seoul. She likes spicy food and spicy people. She is convinced that every English-speaking ex-pat in Korea has a soft spot for Special Agent Gibbs.