HomeArtExhibition Review: The Body Factory at Platoon—Designing the Perfect Female

“Korean society asks women to have the same face, body and build, which has become people’s idea of beauty… Korean woman should be scared of completely losing their identity…” -So Eunjeong

The May week of Monday the 23rd to Friday the 27th saw the Body Factory Exhibition at Platoon Kunsthalle in Gangnam Gu, Seoul.

The exhibition was designed and installed by fashion and art lecturer So Eunjeong. So is also the Creative Director at design house Dusty Goiyanni London, served as Illustrator to Alexander McQueen and is the Art & Cultural Editor at The Three Wise Monkeys.

So has lived and worked in Apgujeong for some time. Apgujeong is the home of cosmetic surgery in South Korea. One street alone (the one with the subway exit on it) carries more than 250 cosmetic clinics. You could literally come out of Exit 4, walk forward and by the time you hit the junction at the end of the road, go from black to white, white to brown, fat to thin, big to small, and back again with your ass-fat stuck to your chin and your stomach fat stuck to your cheeks.

This environment, combined with the industry that Eunjeong has worked and studied in for the last fourteen years led her to install the Body Factory Exhibition at Platoon Kunsthalle.

The feeling of the exhibition, much like the feelings to be found at the German-owned Platoon and across the regions of South Korean popular culture—the image-locked worship of mundane celebrity status and the generic wide-spread depression, eating disorders and suicide—was bleak. Really bleak. And a little German.

The overwhelming feeling in the air was that the modification of the body in search of a false beauty has become more of a factory line turn-out for the moderately well paid, rather than an art form for the super rich.

Manufactured beauty was represented through an installed process of four parts moving from right to left. The imagery on the posters and across certain elements laid out the idea of same-face syndrome. There are seemingly only a number of false faces available. Walk the streets of Apgujeong and you’ll see them, both men and women with the same face. The reason for this is that they quite probably had that face put on them by the same person. That was what hit you as you walked past Platoon Kuntshalle.

The image plastered across the large glass windows.

On the far right of the room, paintings over imagery of a woman’s body lending to the idea that what is sketched over your body in the consulting room is the perfect idea of what you should look like, regardless of your opinion. It helped that the girl in the pictures was already ridiculously attractive, prior to the overlay. Secondly, a conveyor of suspended body parts.

Due to an apparent error in budgeting the conveyor was made out of plumbing piping, but that aside the section was as equally creepy as the rest 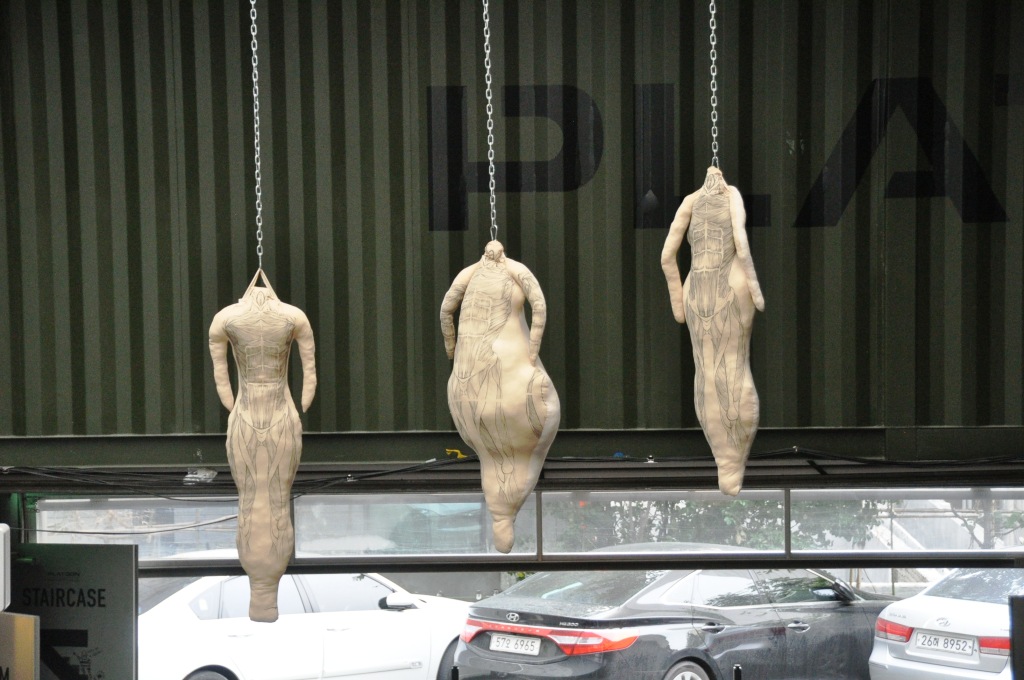 of the installation. Thirdly, bodies hanging on hooks suspended from the ceiling; fairly self explanatory. Lastly, at the other end of the hall, past the worryingly hip dudes and girls sipping Coffee Martinis, swapping hats and fixing remote control cars, was the final product.

The Perfectly Beautiful Body. Four mannequins, draped with lacerated vinyl over sketched-on and somewhat contorted body stockings. That was it.