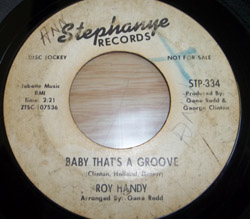 a lot of people don’t realize, or forget, is that Detroit was a hot-bed for musicians and the recording industry throughout the 1960s up until the 1968 Detroit riots. Most people can only think of Motown as coming from Detroit, but the reality was that there were tons of little labels in Detroit during this period. Many of these labels had only a handful of releases; some others fared better, perhaps staying afloat for a few years before returning to obscurity.

Stephanye Records was one such label. Stephanye was based out of Detroit, but only released three 45s circa 1966. Like the label, Roy Handy, the featured artist on this 45, is also something of an unknown. An on-line search revealed six releases to his name, the final three while being a member of the soul group, The Chosen Few, in 1973. Other than this information, I could find nothing else of significant value either about the label or the artist.

But if you look at the production and songwriting credits on the label there are some very well-known soul-world names. On the production side of things you have Gene Redd, a noted music producer at the time who, among other things, helped Kool and the Gang get started just a few years later. Also on the production side you have George Clinton. You may recognize his name from the mid-70s Parliament and P-Funk, but Clinton had been around a lot longer than that. I continually see his name pop up both as a producer and as a songwriter from his earlier days. Indeed, his name is listed on both the production and the songwriting credits for this single, too. His name as a songwriter stands along side Holland-Dozier, two thirds of the Holland-Dozier-Holland team that helped Motown claim nation-wide recognition. So Roy Handy’s single for Stephanye certainly had the backing of big-time names within the Detroit music industry of this era.

Check out the track and enjoy!