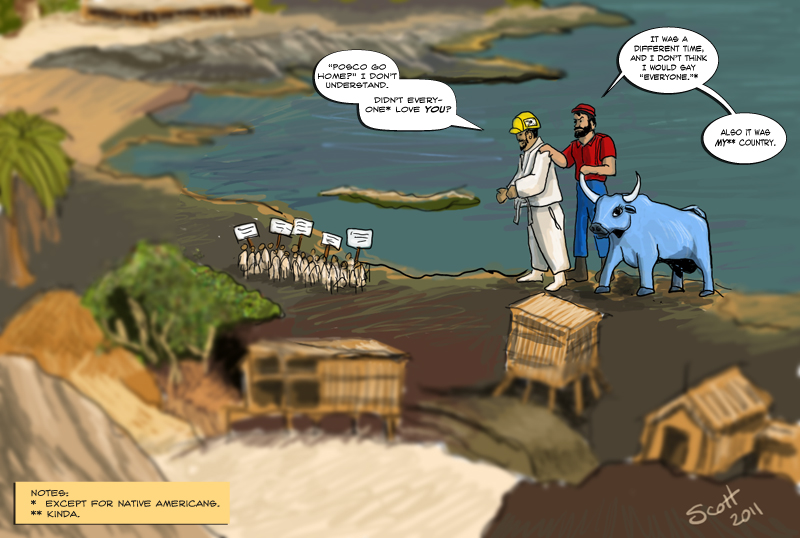 Editor’s Note: This is the final installment in a 3-part piece on the POSCO-India captive port/plant and mine project. 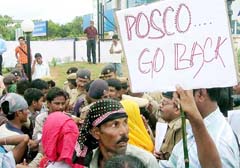 You might be reading this and thinking, Can POSCO be solely to blame for these violations of environmental law? But before you assign equal weight to both parties, let’s take a look at the MoU signed in 2005 between the Government of Orissa and POSCO:

“The Government of Orissa will assist the Company in obtaining all clearances, including forest and environment clearance and approval of the State Pollution Control Board, and the Ministry of Environment and Forest, Government of India under Forest (Conservation) Act, 1980 and Environmental (Protection) Act, 1986 for opening up the iron ore mines, laying roads, constructing townships etc.”

“The Government of Orissa agrees to facilitate and use its best efforts to enable the Company to obtain a ‘No Objection Certificate’ (NOC) through the State Pollution Control Board in the minimum possible time for the development and operation of the Project.”

“The Government of Orissa shall second (at its own cost) to the Company’s project office in Bhubaneswar, an Officer of the appropriate level to be dedicated to the facilitation of the project. The Nodal officer shall diligently pursue the granting of all such approvals/clearances within the minimum possible time and update the Company at regular intervals on the status of these applications.”

“In the event of litigation at any stage, the Government of Orissa will diligently defend their recommendations made in favour of the Company in the appropriate judicial, quasi judicial fora.”

How can the Government of Orissa with one hand help ease environmental clearances for POSCO’s project while at the same time be responsible under the law to enforce POSCO’s compliance with environmental regulations? Is that not like being both the prosecuting and defense attorney? We can see that the Government of Orissa represented and embodied by the Nodal officer is quite literally working not for the best interests of the people of Orissa State but instead is working for POSCO. The Government of Orissa has, using the wording of one of the quotes above, made its best efforts (by hook or by crook; by fair means or foul) to move any obstacles, whether legitimate, legal or moral, to one side to let its pay master’s project trundle on regardless.

Recently I received another email concerning the POSCO embroglio; this time from POSCO Pradirodh Solidarity. The email informed me that May 2nd the Indian Ministry of Environment and Forest gave POSCO’s planned port/steel plant and iron ore mines project in Orissa final clearance. Yet how is this possible as the MoU signed by the Government of Orissa and POSCO on June 22, 2005 expired last year on June 21, and has yet to be renewed. Thus, this land clearance is totally illegal, and to acquire the land is therefore a criminal offence. The proper protocol and procedures set out in the Forest Rights Act, 2006 have been willfully ignored time and time again. The local village councils or Palli Sabhas met and voted on whether or not to allow POSCO access to their land; their answer was an unequivocal ‘No’. The Government of Orissa has simply ignored this legal and democratic expression of the will of the local inhabitants of the project-affected area. First, the Government of Orissa rejected the decision of the Palli Sabhas. Then, even more criminally, it failed to pass on evidence of this decision in the form of certificates to the Central Government. The MoEF has continued this obstruction process by also denying that any resolutions were passed by the Palli Sabhas. The Government of Orissa has even ridicuously denied the land in question is forest land when its very own maps say it is. Without the settlement of rights through the legal process, the government does not own the land, and has absolutely no right to give it away. I mentioned the Forest Rights Act (FRA) before but I’ll just go over it one more time. To redress historically abuses of forest dwelling tribes during the colonial and post-colonial period, the Indian Government had passed into the law the FRA; which is an act to recognize and vest the forest rights of those who have been residing in such forests for generations but whose rights could not be recorded. Under this law, no forest land can be given to any one until, one, all the rights of all the people in the area are recognized and, two, their consent is given.

The POSCO Pratirodh Solidarity put it eloquently in their email:

The MoEF order on POSCO goes on to say that the “implementation of the FRA 2006 and August 2009 guideline is “a learning and evolving process…” We are not familiar with this novel concept. A law is either followed or not followed. To allow diversion of forest land by issuing an order without implementing the laws is a “criminal offence”. A crime cannot be “a learning and evolving process.

In short, the corrupt Government of Orissa and the MoEF are in the process of giving land that they have no legal right over to a foreign company (POSCO). These parties are in such a hurry they have blatantly ignored the rule of law (both State and National) to facilitate the ‘supposed’ largest injection of investment the Indian economy has seen since liberalizing in 1991. The MoU between POSCO and the Orissa Government requires the latter to grant prospecting licenses and mining leases for the next 30 years for POSCO to extract a total of 600 million tonnes of iron ore for use in its proposed steel plant, and further obliges it to assist POSCO in acquiring another 400 million tonnes for its steel plants in South Korea. Now the price of iron ore increased tremendously between Rs 300 per ton in 2002/2003 to between Rs 5000-7000 in 2005/2006 (a nearly twenty fold increase). BHP Billiton, one of the biggest mining conglomerates in the world, estimates that the price will reach Rs 10,000 per ton in 2011 due a global shortage and demand. The Mining Zone People’s Solidarity Group estimate that even though POSCO’s mining operation costs in Orissa will be twice those of neighbouring provinces. It assumes for arguments sake that POSCO will only have to pay a royalty based on value of only 10 percent of the pre-shipping price. And that the market price it gets for its iron ore will be the historically low price of Rs 4,500 per ton and not the 10,000 estimated by BHT Billinton. Based on such figures POSCO stands to make a profit of 3,300 per ton. From 20 million tonnes a year that amounts to just around $1.5 billion. From such arithmetic it is clear POSCO will recoup the entire $12 billion that it is projected to invest over the next thirty years within the

first eight years of operations. Thereafter, everything it makes will be pure profit. These figures do not include the 400 million tonnes of iron ore mentioned in the MoU that the Government of Orissa is allowing POSCO to mine and then ship to its steel plants in South Korea.

“That much ore will produce enough steel to build an entire city larger than Delhi and Mumbai put together, or replace Indian Railways’ entire rolling stock—about a quarter of a million railroad cars and 8,000 engines…,” according to the report, Iron and Steel: The POSCO-India Story by the Mining Zone Peoples’ Solidarity Group.

Where the supposed benefit to the local and national economies is to come from I cannot see.

Even though the MoU was signed between the Government of Orissa and POSCO on June 22nd 2005 not one acre of land has been legitimately allocated to POSCO; unsurprisingly enough, on the ground, this mega-project is on hold as are the lives of all the inhabitants of the project-affected areas; who suffer daily at the hands of the security services, the courts and POSCO-hired thugs.

Protestors have been shot at, beaten, have had their homes and property destroyed; one villager (Dula Mandal) so far has been killed. State police have kept several opposition villages under siege, which has affected people in many ways; no one could leave the villages to get medical treatment; people with business outside the villages had serious problems continuing their livelihood; the education of children was disrupted because they couldn’t leave the villages. Under threat of beatings and arrest they and their lives have been kind of on hold these last few years. And why? Is it because these people have stood up for their rights? Is it for opposing a large foreign conglomerate and their corrupt local government? If so, then shame on POSCO and the Government of Orissa.

Support the valiant people of Orissa in their fight to preserve their way of life and the forest that sustains them. Join me in saying loud and clear that this is not the kind of development Orissa needs. Tell your friends about this issue. If the Libyan people can rise up against Gaddafi; and the Syrians against the Baath party; if Bahrainis and Yemenis can demand their rights and freedom and use all available modern technologies and social networking media to highlight and support their cause and demands, why can’t the people of Jagatsinghpur, Sundergarth and Keonjar districts in Orissa in eastern India beat this Korean Goliath?

To POSCO, I say, in these increasingly global times your actions are noted and that they have domestic repercussions. Disregard for the rule of law and due process in one country tarnishes your reputation in your own. And no amount of charitable donations and investment in education and sport in South Korea will redeem it. 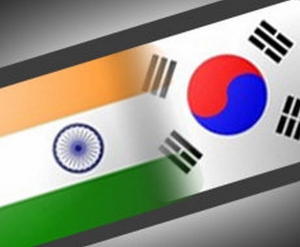 Moreover, to my adopted countrymen and women of South Korea I say wake up to what one of your own flagship conglomerates is doing in a fellow Asian country. If POSCO can have government ministers and whole state governments in India in its pocket, what is stopping it from buying influence here? Or has this already taken place? Is this how you want South Korea to be known throughout Asia and the world? As a nation that rides roughshod over the sensitivities and laws of others?

I will leave the last words on this issue to a local, Orissan wage labourer; whose job it is to pick and sort, the much sought after betel vine leaves:

John Peter Kay started writing in earnest back in 1996 at art school. Since 2003 he’s taken as his inspiration the sounds, sights, smells, tastes and incidents of life in South Korea.  He can be contacted at jessiebellinakay@gmail.com