Now that the weather is warming up, I felt it would be time to plug Billy Stewart’s “Summertime.” Now, I’m not a 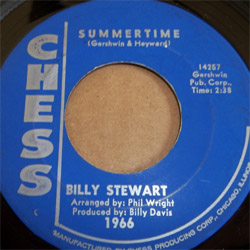 big fan of this Gershwin tune in particular. Most versions I have heard have bored me to tears. But Stewart’s version is all-together different. Released on the Chess (Chicago) label in 1966, “Summertime” peaked at #7 on Billboard’s R&B chart and at #10 on the Pop chart respectively.

Without a doubt, this tune was Billy Stewart’s biggest hit of his recording career. In a nut-shell, this track showcases Stewart’s dynamic vocal prowess. Soul Singing 101—that’s a fact! His liberal use of trills and scat throughout this track helped solidify his distinctive talent. Whenever I listen to this 45, I feel that Billy and his band are right there with me. Its live sound and high energy truly make this a song to hear during the summer months of the year. Listen and enjoy!

Note about Billy Stewart: Stewart cut almost all of his tracks for Chess from the late 50s until 1969. He cut four albums and twenty singles during his career. Nine singles made the top 50 in Billboard charts, most of them coming from the mid to late 60s. Chart success indicates that he must have had some credible fan-base. Unfortunately, he met an untimely death in 1970 as the car he was driving crashed into the Neuse River, North Carolina, killing him and three members of his band. He was only 32.