“You don’t really want to work here anymore, do you?” Sookie asked him.

Scott reserved but half his attention to this, and decided that the last thing in the world he needed was a Korean woman fumbling toward Western sarcasm. Was she replaying a scene from a movie, or was there a legitimate Korean equivalent to such a tone, he wondered.

“Otherwise, why would you not mark Ho Park as being absent?” she went on.

Scott had neither the energy nor the inclination to inform Sookie that as far as he had been told, that boy had been transferred out of his class. A lack of communication was only one of a number of things that this hagwon embraced, the rest being a deficiency in manners. And were he to be entirely honest, he didn’t care about teaching at this hagwon any longer, and nor would Sookie be here by the middle of next month. The word had been circulated that not only would the

hagwon not be hiring a new foreign teacher in three months time (after Scott’s contract was up) because this was out of the range of the hagwon’s budget, but that also Sookie would be gone. The hagwon could no longer afford a head teacher, instead, to be supplanted by some shifting of schedules of the small number of teachers that they already had, coupled with hiring a part-time Korean teacher on a very part-time hour to two hours a day basis.

All of this begged the question, why did Sookie still insist upon nagging Scott? His reply was a shrug and hers a heavy sigh before stalking off.

There were so many points in life that once having relevance for Scott now held little importance. Part of the reason for this was because he came out of his recent concussion with the inescapable feeling that he had lost something.

What did he care for teaching? Was it as his father labeled it?

“You’re running to the other side of the planet to avoid taking on the full responsibilities of real life. You’re delaying.”

While such a sentiment coming from an ignorant man who might very well mistake France for China or vice versa on a world map, who had no interest in anything outside the U.S., normally carried little weight with Scott… yet the truth was, he had never aspired to be a teacher. It was not his goal.  Perhaps it was like what Cap said? Cap was in his mid-fifties, a regular fixture at Mandy’s, an expat bar in Changwon. Cap had his philosophy down pat when it came to foreign teachers in South Korea.

“Six out of ten working in the private school, or hagwon system, will end their tenure with a story that’ll at the very least make you feel uncomfortable, or bring you to tears. ” He bemoaned such sadness.

“From delayed pay, mysterious deductions, to being fired on the eleventh month from the hagwon for them to avoid paying out a bonus, to sexual harassment against females… the system here is geared against us foreign teachers. You try to lodge a complaint with the Labor Board against a hagwon, and see how far you’ll sail with that. And don’t look to the newspapers to shed any real light on the educational system here. It’s always ‘the devilish and decadent foreigner,’ never the cheating and conniving hagwon owner, not only ripping off the foreign teacher, but using the same ax against his or her fellow Korean employees. And that’s a shame, because in most other ways, Koreans tend toward honesty.”

Cap professed that he’d given up the teaching racket a couple years earlier. He was retired. Whether he was earning money elsewhere or living off his savings, he was tight-lipped about. To teach or not wasn’t the question for Scott. It wasn’t the issue. It did not explain why he was short in speech and reluctant to meet again with his girlfriend. It gave no reason as to why he couldn’t bear the sound of the voice of his good friend, Mike. As best he could figure it, they had been with him on the night of his accident, and somehow his mind was associating them with the blocked memory of his accident, whatever it had been. So when he even thought of Reggie or Mike, he began to smell the scent of buttery, rotting, wet tin. He had been experiencing since the accident a number of unpleasant yet hard to identify scents, not uncommon to one who receives a head wound.

Those twins…   Kyle and Kevin. Kevin and Kyle.

They had been assigned to Scott’s class as a pair, and in the back of the classroom they sat, as quiet as owls that could no longer “whoo-whoo.” The whole world was reflected in their large, round glasses, as they remained fixed on Scott, more than just listening to his every word. It was as though they were absorbing him. In truth, he couldn’t stand their presence, and often before class, his stomach would literally knot up. During class, it was sometimes as though all except Scott and those twins dropped away. It boiled down to two of them against one of him in a test of wills, an unspoken battle with untold rules. And more often than not, they said not a word. Contractually, Scott was obligated to make them learn and speak English. But they challenged this, with lips sealed, yet holding an unspoken dominance over the other students. Worse than that, they often appeared unannounced at the odd moments when Scott believed himself to be alone.

He went to the restroom, and on the way out, the door would open, and there one or both of them would be. He went on the roof of the building during one of his ten-minute breaks for a smoke, and around the corner, one of them would be peering at him. Surely they were not supposed to be up here. But Scott remained silent on the issue. Let the hagwon deal with their students playing the role of acrobats on rooftop ledges, if that was what these strange twins were doing. And a part of him knew what they wanted. They wanted him to engage them, to question them,

There was the Galax Cafe, for example. He walked past it on his way to and from his hagwon each and every day. To the best of his memory, he had never been inside the cafe. Yet something told Scott that he simultaneously must and must not venture inside, because there was something he needed to and should never see. It was the scent when he passed the Galax Cafe (a scent of black tire rubber, stale corn, and sugary mayonnaise bubble gum). On Tuesdays, the scent was the strongest. On Tuesdays, he was most tempted to enter, yet most repelled.

There finally came a Tuesday when he could not stop himself from entering. Which Tuesday was this? He had lost count. Perhaps he could sit on the street corner, take off his shoe, and count the Tuesdays off with his toes. He was tempted, but he did. Instead, wading through nausea, he forced himself into the cafe on the second floor of this Korean building overlooking one of Jinhae’s main streets.

He took a seat at a table, feeling the onslaught of a throbbing headache. A female server stepped over to his table, smiling at him, prepared to practice her English.

“Where you been, Scott?” she asked. “You want your same drink?”

The Korean bar maid eyed him for a moment, wrinkling her nose as though she could sense something amiss, or perhaps was missing something through translation. But then she trotted a smile forth.

Scott paid no notice to these shifts in behavior on the part of his server. Instead, he looked to a man seated across the room. The man was drinking a cup of chai tea. Scott did not know why he knew what was in the cup, but somehow he did. The man was further distinguishable by that which he did

not have. He was missing the upper half of a pinky finger on his left hand.

The room had begun to spin. Scott gripped the edge of the table to steady himself. He had not noticed that his drink had been set down in front of him. And he certainly did not notice, when the man with only a half a pinky finger on his left hand looked over in his direction. That was certainly nothing more than his own overactive imagination. Scott looked away, and pretended to ponder the problem of his hagwon’s financial difficulties, and even Sookie’s human frailties, perhaps not being the minor character he supposed her to be, but one who was stress-filled and could not… could not…

He gulped down his drink, slapped the correct payment upon the table, and bolted out of the Galax. He hazarded only one glance over his shoulder as he passed through the door. He discovered that he was being pursued, a cup of chai tea dropping to the floor of the cafe with a crash and smash.

Scott leaped down the steps, skipping stairs here and there, occasionally fumbling, tumbling, and slamming into a wall through the course of his descent, but losing no speed, his energy carrying him forth, out of the building. He nearly collided with an old Korean woman passing by but then tripping over his own feet, sent him sprawling, and then like a rubber ball, bouncing back up to his feet and racing forward.

There were alleyways and dark corners that he knew well enough, living in Jinhae for as long as he had. He raced past hole-in-the-wall entries, odds and ends shops, and small snack markets. He zigzagged; half doubled back, and then ran in the opposite direction. There finally came a point when he stopped, looking all around him. There was only a small, elderly Korean man, regarding him with a bemused expression, as though at the zoo, watching a monkey and trying to make sense of that human-like animal’s somewhat similar but mostly primitive antics.

Scott dashed across Jinhae’s main street. The narrow lane from which he had emerged was perpendicular to the street. He felt oddly certain that once he reached the other side of the road, he’d achieve some level of safety. Behind this main street was a long lane with hof houses and Korean restaurants where many lingered over their Korean dishes, side dishes, and soju. With the sun having set, the lane was populated with Jinhae denizens, some in uniform from the nearby naval academy.

Here, Scott did his best as a foreigner to blend in and gain some time to think. He needed time to process and understand what had just happened. This was when he was yanked backwards into one of the crevices between buildings. A fist was sent into his stomach. He wheezed, immobilized, doubling over. Looming over him, he only saw Timothy Cotton’s shadow illuminated against the wall.

“Sadly,” his assailant lamented, “my solution failed. You’re still remembering. Once that dam springs a leak, it’s bound to burst. We need a more radical solution.”

A knife gleamed in the hand of the former vocalist of Cider Lane.

”I bit into my pinkie as the tip of my tongue was cut off,” thought Scott, only that was backwards. And by the time it was entirely cut off,  Scott was Scott no more. 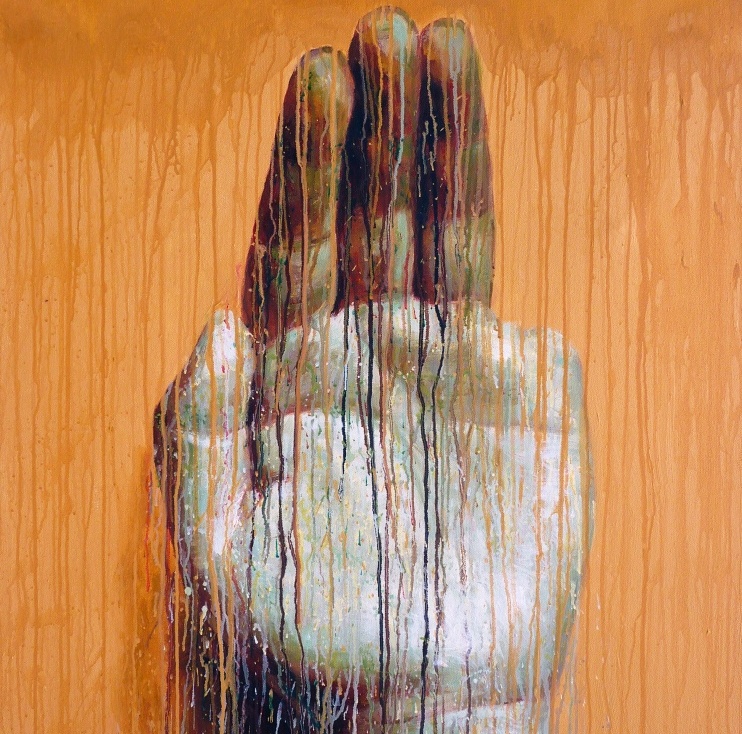