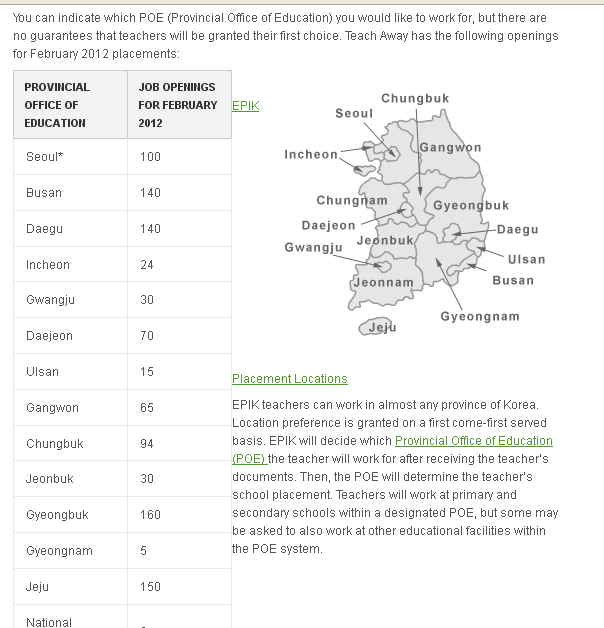 Over recent years the growing trend in Korea’s ESL education has pointed toward a preference for Korean English teachers in both private and public schools.  The administrators of schools prefer to

have teachers who can work within the system, removing any sort of language and cultural barrier and, as new reports and polls are now showing, parents and kids prefer a Korean teacher over an expat (see here for a detailed list of sources).

Now, the Seoul government has taken heed and says it will show all expat English teachers in Seoul’s public high schools the door beginning in September of 2012.  According to today’s Joongang Daily:

All foreign English teachers at public high schools in Seoul will lose their jobs beginning in September after the Seoul Metropolitan Council decided Wednesday to cut the budget for the teachers’ employment.

According to the Seoul Metropolitan Office of Education, the 4.4 billion won ($3.9 million) usually allocated to hiring foreign English teachers at city high schools was removed from next year’s budget proposal.

As a result, the 255 foreign English teachers currently employed at high schools in Seoul will not be able to renew their contracts starting next September, and all English classes at the schools will be taught by Korean teachers.

In addition, the Seoul Metropolitan Council will decide next Thursday, December 15, whether or not to extend the mass layoffs to all public elementary and middle schools in the city, resulting in more than 400 additional job losses.  Again, the Council says that this would allow for billions more in budget cuts as the Korean teachers who currently team teach with the native speakers will take over full time.

As also stated in the article, according to one Kim Jong-wook, a Democratic Party Council member, “there is a high possibility that the budget cut for foreign teachers at elementary and middle schools in Seoul will be passed next week.”

No mention of the English Program in Korea (EPIK)–a program created by the Korean Ministry of Education that places native speakers in public schools across Korea– has been made, but the program will surely have to correct the

information on its Website that currently lists 100 open positions in Seoul for February 2012.  According to the site, “the period of employment is for one full year (i.e. February 2012 to February 2013).”

This action by the government comes as no surprise and falls in line with tightened visa requirements for English teachers since December of 2007 when full health screenings–including drugs and AIDS tests–and  national criminal background checks (i.e., FBI checks) became standard.  Controversially, these checks only applied to E-2 visa holders and not those teaching on different visas.  Nevertheless,  E-2 visa holders make up approximately 80 percent of all English teachers in the country so the move was a crackdown on the large majority of instructors.  Some see this as a good thing as it will weed out and keep away the transients, deviants, pedophiles and outcasts who’ve soiled the reputation of English teachers over the years.  Others, especially those who take their job seriously, see it as a witch hunt and a blanket stigmatization of all teachers.  This further fuels suspicions that nationalism and xenophobia are bigger influences in policy making than actual research and pragmatism.

Whatever may be at work, the the days of Korea as an expat English teaching haven are clearly numbered.

Othering Pt. 2: Being a Global Nomad in a Third Culture