HomeEXPAT LIFEExpert Travel Shut Down, Scammer Kang (aka Kim) Still out There

Expert Travel Shut Down, Scammer Kang (aka Kim) Still out There 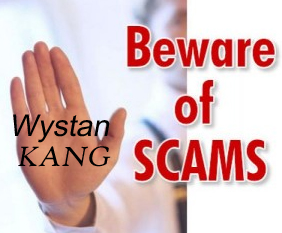 How do you stop a scammer? You contact the police, present evidence of the scam and wait for justice to be served, right? Unfortunately that justice may be–and usually is–slow to arrive, if it ever does. The system has to do its work as the judicial machine chugs or sputters along. Such is the current case with Wan-koo Kang (aka Wystan, aka Joseph Kim), the man behind a travel scam that appears to have stretched on over years, raking in tens of thousands of dollars, ruining people’s “scheduled” trips sometimes leaving them ticketless at the beginning of a planned journey or stranded in the middle of a trip with no return ticket. That is until victims began to mobilize and attention turned to Kang’s brazen chicanery.

That attention led to the initial September shutdown of Kang’s Zenith Travel agency and his October arrest (though the court decided not to detain him). But the snake slithered on, continuing his dirty dealings under both his original name and the pseudonym Joseph Kim–Kim worked at the new Expert Travel in the Songpa District of southern Seoul. Brazenly and some would say, stupidly, under the name Kim, Kang sent out an email advertisement for Expert Travel’s “Cheapest Air Tickets” to more than a hundred people, including people he’d scammed while working at Zenith Travel.

Eventually, word got out, the Korea Herald was contacted by victims and its investigation discovered that Kim and Kang were one in the same (Kang’s ID was used to identify him in person and a person who’d previously dealt with Kang confirmed his identity). The scam had mutated and relocated.

But how could he be stopped? The prosecutors were still working on the original case, though the case had been transferred from the Central Branch of the Seoul District Prosecutors’ Office to the Eastern Branch and as a result, had a new prosecutor assigned. Let the law do its work, was the general message expressed by the authorities; these things take time.

Following up on an earlier connection with the Korea Tourism Organization’s Tourism Complaint Center, 3WM contacted director of its English section, Kim Hyun-joo. Ms. Kim had established earlier contact with the Prosecutors’ Office and other district government offices in relation to the original shutdown of Zenith Travel and Kang’s arrest. Expressing disbelief that Kang could still be operating with impunity, she was eager to take action.

Working with Ms. Kim since December, 3WM gathered information from victims and passed it on to her. She also contacted the Songpa District Office to notify them of Expert Travel and “Joseph Kim.” “We need evidence,” she was told repeatedly. The fact that Expert Travel only had a registration for doing business with Koreans decidedly was the best thing to go after in order to achieve some success in stopping the scam. Once 3WM was able to provide evidence that proved Kim had conducted business with foreigners, the wheels began to move and on January 17 Expert Travel agency had its registration to do any business suspended under the Korean Promotion Act (Article 33).

“According to the Songpa [district] Office, any new travel contacts during the period of 2012/01/17~2012/02/26 are illegal,” said Ms. Kim. What about Kang? Can he continue to do business? “Legally he cannot do any business as he does not work for a registered travel agency,” Ms. Kim said. “But if he operates illegally, that is hard to stop until the court allows the prosecution to detain him,” she added. Ms. Kim stressed that the law is the law and there is no way to rush things. She passed on all evidence she received to the prosecutors’ office (after translating documents to Korean) and they said they would deal with it. Yet they also stated that Kang “has no money,” according to Ms. Kim. Apparently, the bank accounts that were listed in detailed evidence provided by recent victims have been locked but are largely empty. Such are the skills of a scammer.

In discussions with Tae jin Jo, 32, the attorney representing 20-some victims in a civil lawsuit against Kang, there is no date for the first trial hearing and the chances of having victims’ losses recovered seem slim. “I have a confidence that we win this civil lawsuit, since we have enough evidences to prove our damages against him. But I’m not sure whether we could receive our money from him or his company, because it absolutely depends on his or his company’s assets. That’s why we took temporary seizures on his or his [company’s] assets,” said Jo who is a public lawyer working for the Korea Legal Aid Company, an arm of the Korean Ministry of Justice. Jo described the Korea Legal Aid Company as helping those like “the poor, the handicapped, farmers, criminal victims etc who need legal aid for free or at the lowest expense.”

The company helps foreigners living in Korea as well as Koreans, “especially in case of foreigners who are suffering from unpaid wage, domestic violence or criminal case as defendant, we represent them for free in Korean court,” said Jo.

Meanwhile, Jo, is waiting for that first day in court and believes “all civil procedure will be finished by this year.”

For now, Kang has had another agency shut down–at least for now–but he’s still out there and could be firing out emails to the next unsuspecting traveler as I write or you read. Travelers be wary.

What Happens When Your Korean Dragon Lady Director Goes Hunting