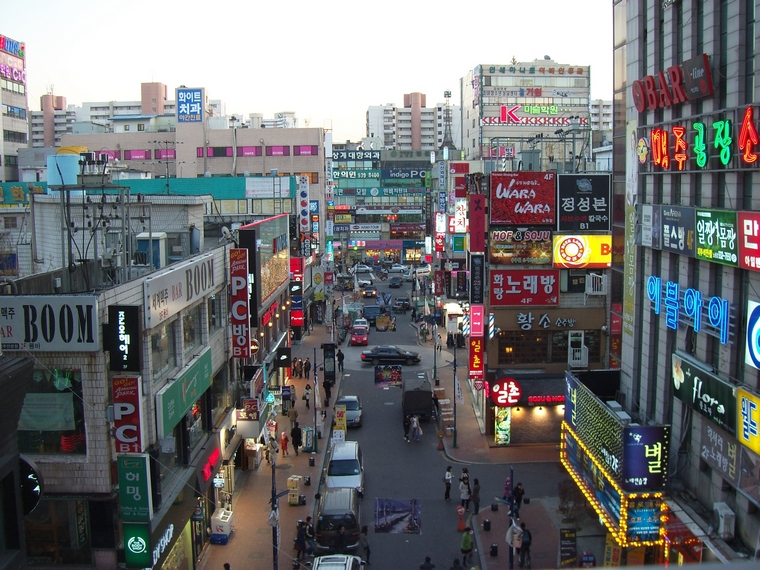 November 26, 2011 was a good day for me–at least most of it. I freelance as an illustrator and I had had a busy week.  It was Saturday and my family was out of town for the weekend (which allows me to get a tremendous amount of work done).  I had just finished up a personal project (an advent calendar for my 3 year old daughter) and decided to go out to Nowon Station to see a friend of mine.  He operates a kebab truck near the main culture street and does a brisk business.  The weather had just turned cold and I was wearing a pretty heavy leather jacket.  I am an imposing figure at 6′ 6″ and really stand out in a crowd of Koreans.  My friend was quite busy and I was just standing nearby chatting with him and his employee.

It was a little after midnight when we heard a loud police siren coming.  A black minivan came tearing down the street, headed to where we were standing near the kebab truck.  The driver was veering toward crowds of people in the pedestrian street and blasting the van’s police siren.  We couldn’t understand why the van had a siren or what they were doing.  The driver slammed on the brakes right in front of a crowd of young men and women who scattered in a panic. All the while the guy in the passenger seat of the minivan was laughing and shouting imprecations at the pedestrians over a P.A. built into the siren system.

I became incensed by this reckless and dangerous behavior.  My friend and I agreed that something ought to be done.  The minivan had already disappeared around the corner and we discussed what kind of action we might take.  Initially I suggested hiding behind his truck and throwing an empty beer bottle at them if they turned up again.  The responsible citizen inside me quickly dismissed this as a kind of revenge fantasy.  In a twinkling, I turned from vigilante to crusader as it occured to me that my smart phone had an HD camera.  I determined to get the license plate number and as much footage of the shenanigans as possible and then show it to the police and file a social disturbance complaint.

A few minutes later, I would have my chance.  I could hear that the minivan was returning; conveniently, they were still blaring their siren.  I positioned myself near the corner around which they would be turning and had my camera ready.  There was a large crowd of people near me, and all of us were craning to see where the minivan would come from.  I stretched out my arm and made sure that I got a clear and steady shot of the front license plate as they came around the corner.  I could see that the driver was looking out the side window at the people and the passenger was laughing and shouting into the P.A. mic.  I suddenly realized that I was standing too far out from the edge of the street and these guys didn’t see me.  I jumped back just as they cruised by but not before their side view mirror clipped my side, spinning me counter clockwise.  I held onto my phone and kept my feet and watched as the minivan stopped about 50 feet beyond where I was standing.  The brake lights flare for a moment and then the minivan roars off and turns the far corner.  People are asking me if I’m OK; there was a street game vendor nearby who had seen everything.  He came to talk to me.

Some old lady said something about calling the police.  I crossed the street to my friend’s truck.  He was busy making a kebab.  “Are you OK, buddy?” he asked me.  I said I was, but could he use my phone to call the police.  He was just about to when a patrol car rolled around the corner.  Someone else had called them.  They pulled around by us and got out.  They took down some names and numbers of a few people who had seen what happened.  Then they asked me to show them the video I had made.  It was about 20 seconds, mainly just the license plate number and then me getting hit.  You could hear a loud “crunch!” sound as they rolled by (presumably me breaking their mirror).  Then you could see them stop and then speed away.  The cops were very excited that the license plate was easy to read and perfectly clear.

I had to go with the cops to the local police station.  They were both extremely professional and very helpful.  I waited outside with one while his partner checked in.  Then we went upstairs to the duty room where there were only a couple of plain-clothes police officers since it was already about 2 a.m.  The one who seemed to be in charge came over and spoke to me in Korean.  My Korean is sometimes spotty (particularly if I’m in a stressful situation), but I was more or less able to outline the basics of what had happened to me.  More importantly I was armed with my phone with the video footage.  The sergeant (or equivalent) was particularly interested in seeing it.  We stood near his desk and he watched my phone’s screen intently as I started the video.

Almost immediately, he asked the tall patrolman, “Why the hell do they have a siren going?”

“I don’t know!” was the reply.  To be fair, the patrolman couldn’t know; they hadn’t yet caught the guys.

“Are you OK?” the sergeant asked me.  I told him that I thought I was okay, but I had been clipped in the shoulder (probably by the side view mirror) and felt a little bit of stiffness already.  I assumed that it would be worse the next day.  He told me that I needed to go to the hospital and the two patrolmen would take me there.  He also asked me to return with my wife to act as a translator as soon as it could be arranged.  We agreed to meet on Tuesday evening.

The patrolman driving the car asked me if there was any hospital I usually go to in the neighborhood.  I told him that I had been admitted to Sang-gye Baek Hospital the year before for cancer surgery and they should have me in their system.  That’s where we went.  The main nurse on duty in the E.R. actually was pretty good at English (I have found that many of the staff in very big hospitals are pretty good at English).  They asked me about my general condition and whether I felt any pain, etc.  I had to wait for a while and then took several x-rays.  The doctor came and asked me morequestions and if I had any specific complaint.  “Only that I’d like to go home,” I replied.  They let me go after about an hour and I took a taxi back to Nowon where I had left my bicycle with my friend.

“Some guy came back looking for you,” he said when I came around the corner.

“What?  Why?”  Suddenly I felt extremely nervous.

“He wanted to know who you were and why you had a camera.  I told him that you were videoing him because he was driving like an asshole.  ‘Why would he do that?’ he asked me.  I told him I didn’t know what you were going to do, but that you went to the hospital and with the police.  He was really pissed off.  He said he’s going to sue you.”  This was not something I was happy to hear.  I didn’t know if I was actually going to be in trouble or not, but at this point, I was so tired that I just got on my bike and rode home.

The next day, I told my wife about what happened.  She was naturally quite concerned and relieved that I didn’t seem to be seriously hurt.  I told her about the guy coming back and looking for me.  We called my brother-in-law (who is a police officer) and asked him.  He said that even if I HAD deliberately tried to jump in front of the car (it was clear in the video that I did not do that), it wouldn’t matter.  Just like most places, a hit and run is illegal and pedestrians always have the right of way.  The bottom line is don’t run over someone who is walking.  I was relieved to hear that this wasn’t going to turn around on me, and on the way to the police station, my wife was incensed.  “I’m going to tell them you just want him prosecuted.”  She was of course referring to the possibility that some kind of “blood money” or payoff could be arranged.  In many cases like these, where discrete parties are concerned, the whole case can handled privately.  The police seem not to care one way or another.  “If he doesn’t seem to be REALLY sorry,” my wife said, “then I think they should just charge him.”

We called the police station when we were on the way.  We had to stop by the hospital to pick up the report about my checkup from the night of the accident.  The police sergeant told my wife to come as soon as possible since the owner of the car had already come to the station.

He is or has been an avid: gamer/reader/writer/designer/cartoonist/developer/hatchet-man/teacher/entrepreneur.