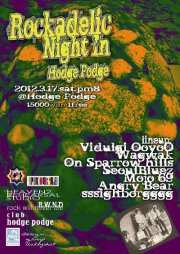 Editor’s Note: This is a loose-leaf, round the dial, yawp heard round the world on diverse (hopefully) neighborhoods in Seoul.

Introduction: In the middle of typing a part 4 of 5 echo- piece on rock ‘n’ roll as it was in Sinchon, I listened to the Keynote of the recent SXSW festival. It was given by Bruce Springsteen (Listen here). It is a brief, brief, brief, brief history of pop music and it pushed me out the door Saturday night to go check out Rockadelic Night in Hongdae at HodgePodge. As for Sinchon, part 1, part 2, part 3 are up, part 4 is coming soon and the end section of the parade, part 5, coming after.

It’s Saturday night, the big night out all over the world, and I want to go over to a local bookstore and look for, “Another bullshit night in Suck City.”  Instead, the subway to Hongdae clubbing district is quiet and the path to club HodgePodge is clear. This is the third life of HodgePodge, the first one exuberantly lived with the dance floor being full of weekend revelers come to listen to a Dj with eclectic 3 generation tastes. You could hear a burning ass mix from Marvin Gaye to Ministry to Massive Attack to MGMT, and of course that was just the M’s.  The second incarnation of the club was over expansive failure built somewhere outside the clubbing loop and no one came. This latest HodgePodge is the smallest of the three and three is a magic number because that’s the price of the mixed drinks, $3. 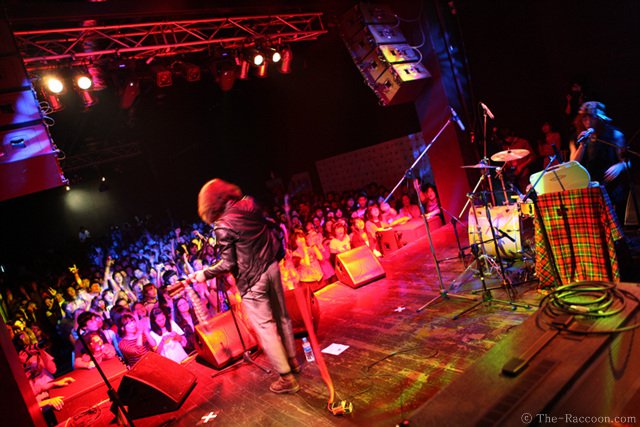 Around the round the corner of HodgePodge, at club FF it’s a St. Patrick’s tribute with Damien Rice and Muse headlining. At least that’s what the signboard said. At first there was a guest list hassle when the doorman told me, “Pay now and you can try to get it off whoever you know inside, but…”  That smoothed out.  The layout  of the new place began to disappoint as I thought there was an upstairs when I saw an Internet picture, but no go. I needed a place to plug in and the outside porch at the entrance provided that.  A wood table with small garbage bags, an empty Budweiser bottle and Pocari Sweat can for ashtrays all in place and somewhere in the alley below I can hear the rats scampering.

9 p.m. Seoul Bluez. A veteran battleaxe of four players jointly nonplussed by the scene as no one is there for them.

10 p.m. Angry Bear. Real time 10:20. Up and down bounce hard drive Zep music. There’s no threshing crowd inside so on the porch there is Australian Tara asking the singer of the blues band, “Muscle Kim” for a smoke. “I don’t want Pot. He thinks I want pot. I just asked for a cigarette.” Kim Muscle has been playing in Seoul anchored clubs for about 20 years and now he wasn’t in the mood to give away anything after playing before an indifferent bar crowd of about 25. Inside, Angry Bear moves into deep drive referencing the heaviness of Cream and the not-really-at-all Pearl Jam sound that so many live foreigner bands seem saddled with today.  They echo to me Blue Oyster Cult without the crisp guitar riffs. So far the inching-up-in-numbers crowd pays no attention at all, or, if they did it was that of penguins paying attention

to a math lecture. —The band is enjoying what they are trying to do and their last song sounds up beat Cureish and then crashing through to the end. Angry Bear was best when they played with melody and atmosphere first and lead guitar breaks second.

10:50. Wagwak. Real time  11:10- A Korean band. A two piece and not just a duo because the sound is big enough that they are not just a duo.  And I don’t want to mention the two world famous bands that are duos because Wagwak’s sound is actually more driving than theirs. Maybe a little derivative of  The Bobby Fuller Four and The Crickets, but the gin and tonics stay the same price and the bar staff uses real lemons! The club is filling up and OK. Time for some frontier stomp. The singer announces  “Let’s have some fun!”, and he means it. The out the gate sound is straight and close to the Beatles…Jo Jo was a man from Tucson, Arizona… I’m listening as closely as I can as Wagwak announces their songs and just under two hours into the night I am actually glad to be here. Did I mention the $3 Gin and Tonics? Why other local places in my neighborhood don’t get this clue is beyond grasp. The “Hey bro” bros are standing in the back of the club hunting for girls and avoiding paying any attention to Wagwak’s gunslinger psychedelia sound. It’s also part The Long Ryders and a street act Adam and Satan I remember years back in Chicago. The drummer had on this cute sailor boy outfit and it’s only silly if it doesn’t work–but it does . On the adagio paced songs, they display real pop-sensibilities inside The Mamas and The Papas harmonies.  There is a lot to that shines  about these guys.

In between sets Sonic Youth’s Sugar Cane is the audio with the video playing behind the stage. This is a coincidence as I was planning all week to show this video to my high school students as sort of a decompression break for them, but, the Internet was munged all week. It didn’t happen but now it’s on and Australian Tara is back for a smoke and running me her dialogue “Some people are such ASSHOLES. I’m just trying to say hello and they act like I want something.” I agree of course and it is just at the time when the song Sugarcane drives it sound to a symphony, drops off to the underworld, comes up for air and transforms back to a pop record. Obviously Tara was looking for something besides the jump of good music on a Saturday night, so yeah I understand how people can be assholes. 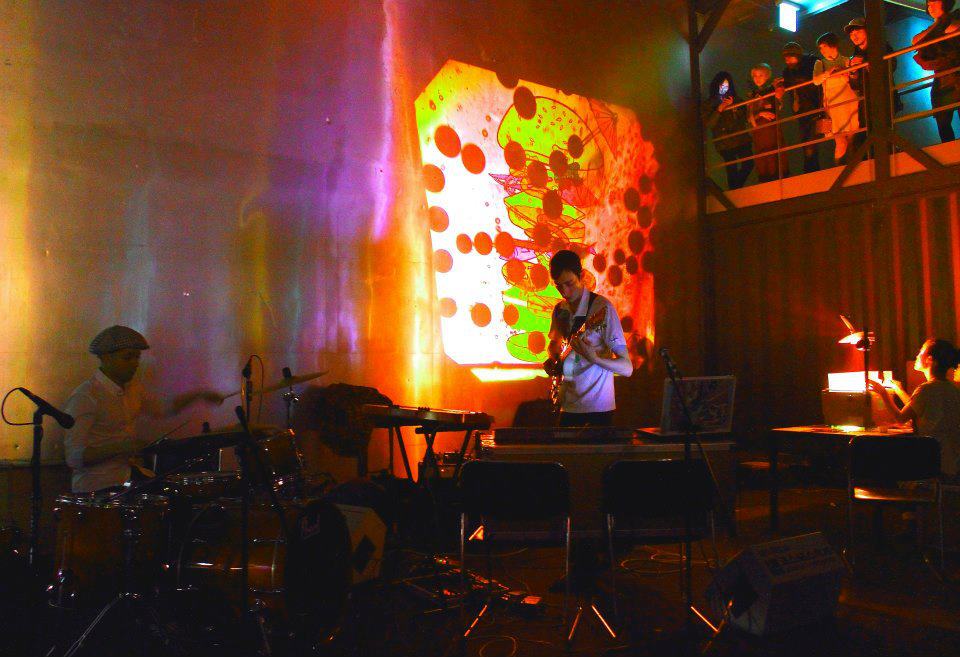 Outside the manager (I guess) is pissing off the porch on the club below and when he finished, that was imprimatur enough for me. I’d rather keep the rats away outside by pissing than wait in line with whoever ‘bro-bro’ was waiting in line to piss.

11:40. Sighborg. Real time Midnight. I missed out on this band mostly.  I am outside meeting Mr. Kang. He makes Bukowski look like a dapper dresser, and I think he might be the owner of HodgePodge. One of these derelict- chic phenomenas in Hongdae. He talks in riddles, dresses like a b-character in a memorable nightmare, and everyone knows him and defers to him inside and outside the club. Of course he could be a mentally ill gangster who talks about bird watching in Seoul, being a chef in Germany and caring for his sick mother. But when he talks about HodgePodge it sounds like promoter-code: “Many times and people know the HodgePodge. Keep your club small and crowded every night that way. The bathrooms used to stink here but redesign with Europe patterns and ladies come for the music too.”

The sound of Sighborgh from the porch was like a Battle Royal on Mt. Olympus. Loud enough so even those dream catalysts known as the Fates and Furies had to listen. When I broke free from Mr. Yang to get closer to the sound and peer in, it could have been John Cage meets the Minutemen.

12:30: Vidulgi  OoyoO.  Real Time 12:45. With the adults showing up at the door I figured they were here to pull their kid out of the club. One song into the set I got a look at the band and figure it sort of a Sunset Rubdown vs. The Pretenders look. And I really wanted to hear songs that sound more like either of those two bands but when the lead singer recast the idea and sound of the harmonica by touching her lower lip ring to the microphone there was a sound not allowed or for sale at Wal-Mart and something was happening here. Lo and behold Mr. Yang has made his way to the stage with his hands up in supplication and he’s channeling something that we could have talked about just moments before. The club is full and $3 still buys a g+t+lemmon.  With Sighborgh the music had turned apocalyptic and now had reversed back to primordial. I could not get close to the front of the band and the energy level was driving with force like Aphrodite fighting to get out of the sea’s womb and make it to land.  Every Navel-gaze post depressive reaction, well, here is Vidulgi  OoyoO’s  bio from last FM.

Drone noise led by the arpeggios, and the voices floating in between. Vidulgi OoyoO (literally translated into “Pigeon Milk”) expands their own psychedelia through shoegazing and slowcore, both of which characterized the indie scenes of the early 90’s.

That’s a little general of course yet every one of their songs seemed to have a genesis moment, and a thoughtful one at that: think Ted Nugent’s great White Buffalo trampling over Dorothy’s red slippers. Think Shoegazing on Mt. Vesuvius. Even the chinsy silk curtains of lapidarian blue and bewitched purple are experiencing an internal monologue and flapping around the third floor windows of HodgePodge. Their set ended up a Rhapsody and that’s enough of that.

On Sparrow Hills. As 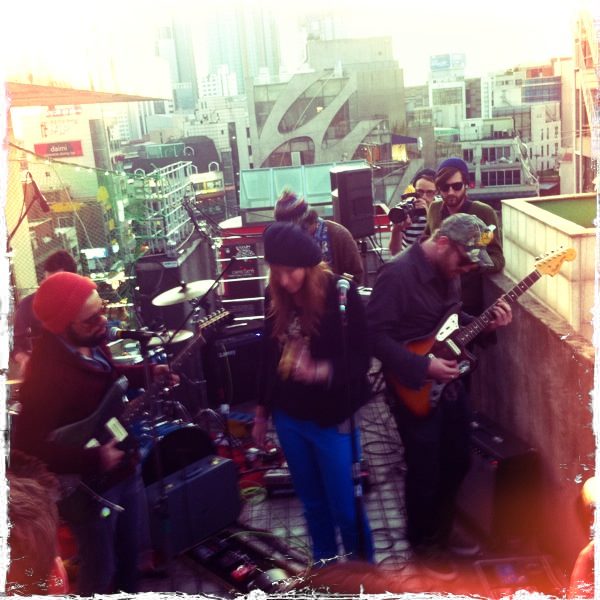 we all know sometimes the reasons for poetry are found in a make believe garden where the toads are real. Meaning I had to abscond from the 1st half of the On Sparrow hills set as my Hewlett Packard and not a Macbook just tanked. It’s late to play live but the atmosphere remains intact.

They present themselves (oops) as a preferably talented high school group who founded themselves when they all cut Physics class and came together to form a band. The singer on the fourth song was happily in tow with Wolf Parade’s Spencer Frug, yet the shifting of roles in the band means that their duties to rock out were shared. When they cooked they cooked and when they sounded like they should chop the lineup to four, well that’s basic math. They did liquor- drops with the crowd which was cool but it can’t take the place of a revved-up set. Then again who wants to be the ipso-facto flash packer band coming on after VoyoO? All the thunder has been stolen. At the end of their set, after 2 a.m., the music had taken everything anyone had to give, well almost. At the bar the hawking voices of the man-less- on-a-Saturday-expat-female –English-teacher could be heard and I couldn’t pay attention to the encore. Hey, at least she bought me a shot.

Teacher comments: It’s hard to make it through a six period all night session and hold on to the hell raising. I was willing to go the distance though and was just glad that another group of foreigner musicians didn’t show up at HodgePodge bringing a bag of Taco Bell for the band. High school teacher grades for On Sparrow Hills: Ok B for tonight’s sound and an earnest A for I’ll get there from here potential. How to carry on Rock ‘n’ Roll extracurriculars to the transcendent pep rally?  Maybe the band should wish to fulfill and bring the teacher out behind the cement blocks away from the spy cameras where we can all partake in the food of the Gods. I am pretty sure Mr. Yang won’t mind. That was all that didn’t happen this night.