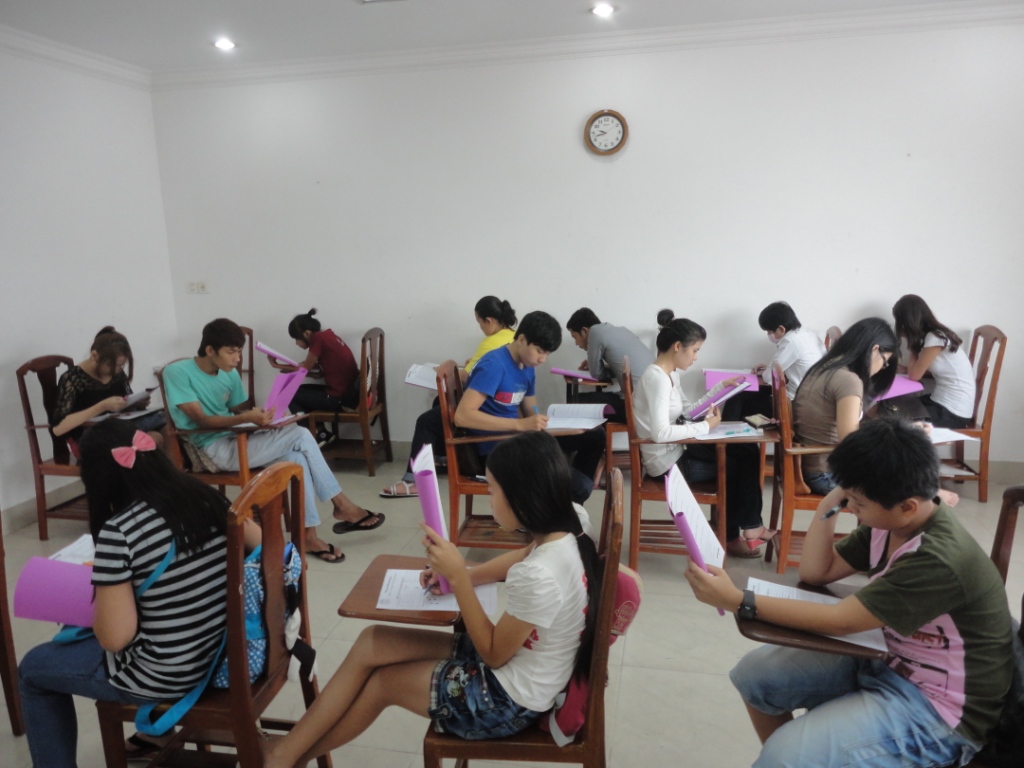 Editor’s Note: This begins a series of day-by-day stories of English teachers in Cambodia. Contact 3wmmedia@gmail.com 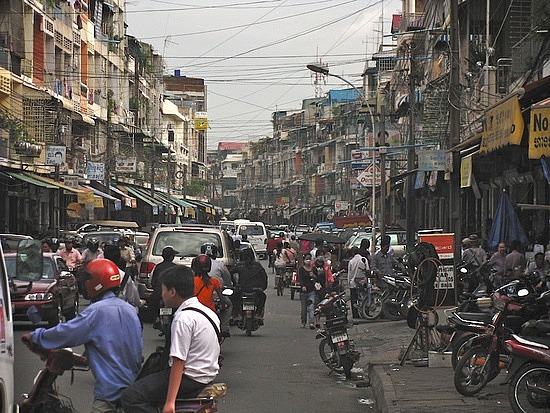 Under normal circumstances, there usually just isn’t enough time in the morning to enjoy a pre-work breakfast, nor has cooking ever been one of my talents but, due to complications brought about by caffeine and alcohol, I found myself awake at 4 a.m. which is far earlier than any self-respecting street vendor in this neighborhood would be, so I schlepped up to the kitchen (which, by the way, is on the roof….how weird is that) to oil-fry some bread into toast for want of a toaster as well as some canned baked beans seasoned, in an east-meets-west sort of way, with Vietnamese hot sauce.  But having had used too much oil for the bread (half of which was burnt anyway), the beans exploded into a 4.5 foot tall flame which, in turn, caused the food to taste significantly worse but, given the circumstances, they were dutifully wolfed down and, hours later, engineered a violent coup within my stomach which then sent a clear message to my brain that it desired to seek refuge in the nearest bathroom.  This was its own challenge as the nearest one was in a dodgy restaurant in which the man at the counter asked me if it were number one or number two so that, dependent upon my answer, he could direct me to either a squat toilet or an odd parallelogram-shaped trough of urinals but, as I figured it, vomit and diarrhea constitute numbers zero and three, respectively, so, in response to a shrug, he, figuring it to be the safest bet, pointed me towards the squat toilet in which I number zeroed and threed but, luckily, not at the same time because the sink and squat were much too far apart for such a thing to be practical and, in spite of the pain of it all, my main concern was whether or not I would be able to make it to work and clock in 15 minutes before the start of the shift (which is both S.O.P. and expected). Job security was quite uncertain at the time and it wouldn’t be worth my while using a sick day as I would only be administering tests that day which requires an absolutely minimal amount of mental energy, so, with a fierce determination of the will, I swallowed my nausea and managed to arrive 15 minutes early, clock in, then perform all test giving related duties.

The first duty is telling the students that, for the first time they are caught cheating, they receive a little blue marker dot on their page signifying that they lose 10 points and, should it occur again, they will be thrown out of the room as their paper is torn to bits in an absurdly melodramatic fashion (though, of course, those exact words weren’t used because it is, after all, an English as a Second Language class), and, after handing out the papers, while struggling to stay awake and remain alert, vigilant, a brief vision of my current life flashed before my eyes, traveling through the bloodshot whites to land at the center of the pupils, and all it had to show me was a haphazard collage of cheap drinks, fried food, cigarettes, girly bars, bootleg novels, and mediocre weed purchased from motodops, and the whole picture of it got me thinking about how, like many others, most likely, I came over here with the naive impression that experiencing a foreign culture in its native country would be enriching and broadening in a psychological sense yet everyone I know, myself included, seems to be rotting away through night after night of reckless abandon and it’s got nothing to do with age because there are plenty of people over the age of 50 even, who dive headfirst into the decadence of Southeast Asia with considerably more gusto than I had previously thought possible. Countless folks in their twenties of course do this and of course we all need hobbies or habits, yet, morning after morning, here we are, miraculously spotless and put together every day in order to explain the present continuous tense and the correct quantifiers to use with countable and uncountable nouns (1) while, rather than opening our minds and our hearts or whatever it is people who go to India for new-age reasons will tell you traveling does, our souls are being pulverized and gradually misshapen by a life of easy excess and so it dawns on Phnom Penh maybe, is a purgatory where bored people go to die

Oh, I’m still sitting in the front of the classroom so interrupting this introspection (possibly just before the point of personal epiphany in some sort of mental coitus interuptus) was the sound of whispered Khmer forcing me to get my ass out of the wooden teacher’s chair to mark his test paper with a little dot as he told me “OOOO, no, cher!” (2)  “Only ask she give me correction pen.” I kept silent because it was obvious to any sensate and conscious human being that, after four consecutive semesters in the same grade level, it was pretty much a learned (and possibly unbreakable) pattern of behavior so, after sitting back down, more of that iced coffee, black and thick as oil, keeping me as awake as I needed to be while, as a side effect, worsening the nausea, yet, anything less would set a completely awful precedent, but something distracted me from the teacher mindset when it occurred to me that maybe the problem is that life here is somehow TOO easy and that it’s not only readily available excess, but that combined with a lack of northern hemisphere friction that would normally challenge, test, and stimulate the capacities of a human personality.   Maybe that’s why I’m not writing half as much as in Philadelphia, during the days when I was fighting with my landlord, roommates, bosses, lovers, and almost everyone else imaginable while bouncing between girlfriends and entry level jobs, but what kind of trade-off is that? What exactly is the price of productivity, is it even worth it in the end, and all these questions are bringing to mind some odd hypothetical mental image of Leadbelly settling down into a nice house with a loving family as he implores his listeners to do in “Goodnight, Irene,”  even though it renders him unable to write any more songs. And what about the image of people like Tom Robbins  who are clearly having a blast while doing what they do and can only do what they do while having a blast. It’s hungover bullshit…

The same student from before is in my peripheral vision glancing at the palm of his hand and his test paper alternately so, as promised, I rip it to pieces with over-the-top flourishes (the paper, that is, not his hand), and ask him to leave but, while he’s getting his books together, I notice that there is no trash can in the room and politely ask him to throw it away for me with such a jarring juxtaposition of voices that it would have made my head spin were it not spinning already. It did not work as a clockwise/counter-clockwise double negative because as the room continued to spin until the last person handed me their test and I uttered my last, “have a good weekend” before clocking out and getting on my bicycle southbound, to grade them at home, and, as it happens, this class lets out during one of the day’s traffic peaks which is normally tolerable, invigorating even, in a strange sort of way, but the insomnia, hunger, and survival-mode adrenaline joined forces turning me feral, which is often a useful emotion for getting shit done in American businesses, bureaucracies, and bar fights, but is totally anathema to the polite, appearance-conscious ways of Asia but, then again, there was the one guy who used the horn of his Lexus SUV in a “fuck-you” sort of way as opposed to the “be-careful-because-a-collision-may-be-eminent-and-neither-one-of-us-would-enjoy-that-very-much-now-would-we?” sort of way and I know this because he stuck his head out the window and yelled “FUCK,” which he had obviously learned in case he needed to express anger towards foreigners but, without any surrounding context, it came across as much more silly than offensive and it was my

third near crash in about 15 minutes of biking which was making me more on edge than before as I rode down street 380 alongside BKK market, right where it intersects with street 63, the street I needed to turn left on but, being so low on the road’s pecking order (3), there needed to be some sort of way to  strategically shield myself with a larger vehicle and, so here comes a  tuk-tuk  pulling up alongside my bike and I asked him “Bong bot schweng nee,” (you turning left here?)  to which he nodded. I grabbed one of the tuk’s metal bars just before he turned with enough acceleration to let me loose with life-preserving speed, both of us choosing to be oblivious of the honking Range Rovers, and, when I thanked him, the look he gave me said “Happy to help,” and it reminded me why the hell I stay here in the first place.

1: this refers to nouns that have an obvious way of being counted, as opposed to those which do not, and the key word in there is “obvious” because, for example, while one could count each individual speck of cocaine, it is neither reasonable nor intuitive to do so, which is why one would ask “how much cocaine do you have,” whereas, for tigers, which are, by contrast, very easy to count, one would ask “how many tigers do you have,”

3: As far as rights are concerned, bicycles are almost non-entities in Cambodian Traffic Law (http://ebookbrowse.com/cambodian-traffic-law-english-version-pdf-d166526791), a bill which seems to have been written with the help of Kurt Vonnegut (http://en.wikipedia.org/wiki/Kurt_Vonnegut) with highlights including “All vehicles which are moving along the road MUST have drivers” 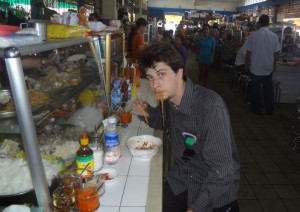 Sean is a young American living in Cambodia. He enjoys crossword puzzles, coffee, bicycle riding, whiskey, and used books. He supports his various pursuits by working as a “handsome” English teacher. 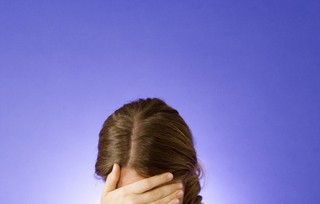