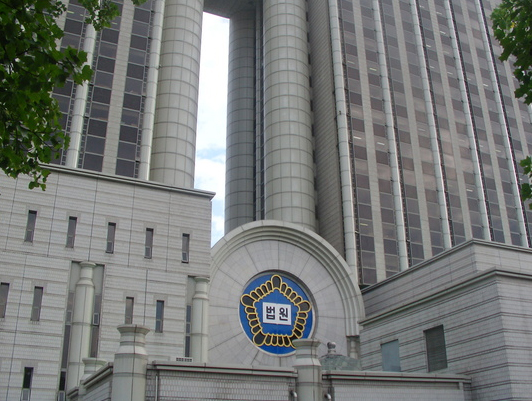 By Iwazaru and Marie Kulik

At 6:05 p.m. on Monday, August 29, 3WM confirmed with Andre Fisher’s attorney that Fisher has 48 hours to decide whether or not to appeal his case to the Supreme Court of Korea.  3WM will update when notified of the decision.

Editors’ Note: The previous editorial stance and coverage on 3WM surrounding Andre Fisher has been redacted due to misinformation. 3WM is determined to present a factual, thorough and unbiased account of the Andre Fisher case.

Shortly after 2 p.m. last Thursday, August 25, courtroom 404 got on with the day’s docket when three male judges entered the narrow, stuffy courtroom and all present stood.  Among those present in the 32-seat gallery were four U.S. soldiers in fatigues, a group of Korean men in suits and several attorneys with assistants.

Quickly, a door on the right side of the room swung open and a huddle of young, thin Korean men in blue shirts led in a short, stocky, wide-eyed American soldier in a beige jumpsuit with his wrists handcuffed in front of him. He was directed a few feet to a long, molded table that ran along the right wall of the courtroom at a right angle to the judges’ bench.

The case was an appeal of a robbery and assault involving the soldier, a cab, its driver and a knife.  The soldier had stabbed the driver “numerous” times in the process of the robbery.  He’d worn gloves and the judge declared it premeditated.  The judges dealt with the young man expeditiously—as seemed to be the M.O. of the court—rejecting his appeal and sending him back to the holding room behind the door.  Only the judge in the middle spoke and a female court interpreter delivered the judgment to the convicted man.  Immediately after the soldier exited the four soldiers in the gallery also departed.

In what seemed like a few seconds, the side door opened again and out swung Andre Fisher, dwarfing the men in blue who encircled him.  Fisher swiveled his head side to side, glancing around the room with his eyes raised toward his furrowed brow.  It was a look of suspicion, anxiety, insecurity and fear.  He took two large steps to the table—he stood between his attorney, Lee Jang-han, on the right and a JAG attorney on his left—and placed his handcuffed hands on the surface which was too low causing him to slouch over more.  He stood like this the whole time, leaned over, swiveling his head, eyes rolled upward and brow furrowed as if expecting something mean.

Fisher was first asked his date of birth (everyone is); “May 7, 1989,” he answered only to be cut off after the seven as the judge got to work.  Fisher had appealed his guilty verdict outright while the prosecution had countered with an appeal of the two-year sentence claiming it was too lenient.  The judge read rapidly with breaks for the interpreter.  Neither attorney said a word and Fisher already looked tired.

The appeal was not accepted, declared the judge flatly, listing off the following reasons:  The court has CCTV footage of a purported Fisher committing the crime; the taxi driver had identified Fisher as the assailant ; Fisher “Did possess a money clip” with the cash “laid in order” as the taxi driver had described it; there was no verifiable explanation of Fisher’s whereabouts at the time of the crime and no detailed information had been provided about his “accomplice” (there was some puzzlement over why this term was used given Fisher’s claim that a witness, a “Jarrod Jeffry,” had been with him in the UN Club at the time the crime occurred and could account for his whereabouts—Jeffry has never stepped forward).

Fisher began to shake his head and shift his large frame from side to side, muttering under his breath.  The prosecutor’s appeal would also be dismissed under certain SOFA stipulations, said the judge.  Case closed.  “Done,” said the judge.

“I didn’t do anything,” Fisher said in a rising but controlled voice.  A few expletives could be heard as the men in blue moved forward.

“Can I say something,” Fisher asked with an air of futility.  Neither the judge , the interpreter or the attorneys said a word.

“This shit is wrong,” Fisher said in repetition as the huddle of young men in blue attempted to corral him into the holding room.

“Stop fucking pushing me,” Fisher demanded as he moved through the side door into the holding room where a man holding a length of white rope stood.  The door closed.  Six minutes had elapsed.

The JAG attorney was quickly out of the courtroom and on his cell phone, moving away down the hall.  Attorney Lee had followed Fisher into the back room which exited out to an inaccessible inner hallway.  Tracking down Lee outside the immense courthouse, 3WM inquired about several new details that emerged during the hearing some of which raised new questions about the case.  Lee was terse in his responses only confirming that he would meet with Fisher the next day to discuss his appeal to the Supreme Court.

3WM is in the process of securing the complete court records for Fisher’s appeal and would like to confirm that despite all of the online commentary and buzz over this case, not one “supporter” or family member attended the appeal hearing.

As time passes and 3WM clarifies the details of the case, it is increasingly clear that more misinformation has been spread about this case than truth or facts. 3WM has now been in consistent contact with attorney Lee and his office and will continue to report on the ongoing legal proceedings.

Below is a recap of the legal challenges Fisher has faced since November, 2010.

On the June 10, 2011, Seoul Central District Court, South Korea, convicted twenty two year old Private First Class Andre Michel Fisher, 4th Chemical Company of the United States Army, of both Robbery and Damage to Public Property relating to an incident that took place with South Korean law enforcement officers and a South Korean taxi driver on November 19, 2010. PVT. Fisher, who has been fighting these allegations since November 19, 2010, was sentenced to two years imprisonment. He had been in South Korea since January 2009.

PVT. Fisher was then additionally charged by Uijeongbu District Court, South Korea on July 21, 2011 of Destruction of Property and Damage of Public Property, relating to a separate incident that took place on May 28, 2011.

The cases surrounding PVT. Fisher have attracted an almost quantitatively surreal degree of coverage, proportionately this interest has been based around the alleged robbery of W94,000 (approx $88USD) from a taxi driver and PVT. Fisher maintaining his innocence.

According to PVT. Fisher, his stance from the outset and as reiterated in his most recent appeal which took place on August 11, 2011 at Seoul High Court, is that the series of events accounted for by the prosecution, are not in fact those that took place.

Whilst this sounds fairly obvious for a defense, the momentously epic angle for PVT. Fisher’s stance of innocence lies in the entire situation being a case of mistaken identity. Or more bluntly, the hypothetically unknown robber was dark skinned, Andre Fisher is dark skinned, and the taxi driver could not tell the difference between the two of them.

Various other elements to the case have been raised throughout the lead up to appeal and PVT. Fisher’s defense, including and as expected, at the Seoul High Court hearing on August 11, 2010, which 3WM attended.

Interestingly reiterated from both PVT. Fisher through his translator and the defense lawyer, were the logistics of the alleged assault of the taxi driver.

According to the prosecution, the taxi driver, a man described in court as being of small frame, took a punch in the face at almost point blank range from a 6”4, approximately 230lb soldier and amateur boxer. According to PVT. Fisher, as stated to 3WM on a visit to the Seoul Detention Center facility, “there was no mark” on the taxi driver’s face.

This factor does give some potential leaning toward the idea that the assault, by PVT. Fisher at least, did not occur.

Again, because some of the evidence summarized by the judge in the most recent appeal brought up new questions about how the case was investigated, especially regarding forensics, 3WM is skeptical of how the crime actually occurred.  As we continue to follow the paper trail, we will keep reporting.