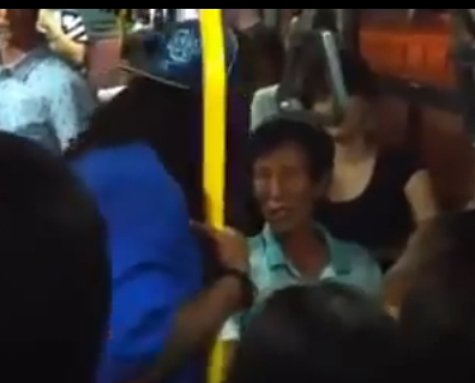 By Iwazaru
[UPDATE] According to Herald Media and the Joongang Daily the assailant said to the police that there was some confusion and that he thought the 61-year-old man, a Mr. Seon, was demeaning black people. The Joongang quotes the police saying, “The suspect said that he felt humiliated by Seon’s words, and it really fired him up,” a Bundang Police official said. “He didn’t deny the assault, so we will charge him soon without detention.” In addition, the man said he’s willing to apologize to Mr. Seon.

The video of an apparent African-American man going off on an elderly Korean man has gone viral. According to a news report on TBSeFM this morning, on Saturday night the black man, who’s an American English teacher, was talking loudly on his cell phone when the Korean man told him to be quiet several times. The word Nee ga (니가), meaning you in Korean, was allegedly spoken, causing the black man to fly into a rage which can be seen in the video below (two are there in case one or the other is shut down). The report also said the bus driver drove right to the police station near Bundang where police arrested the suspect, later releasing him. [UPDATE] According to Herald Media the American has apologized and said the “shut up” set him off.

Little more is known except that the blogosphere is buzzing over the story which is stoking the long festering topic of race relations not only in the West but here in Korea. Mike Hurt goes off on his blog saying, among many other things:

“When the Nigger Starts to Win…

Most people — including the foreigners — see a black man acting out and don’t even bother to consider what happened. He’s just a nigger being a nigger, case closed.

And given Mike’s time here and the situations he’s written about going through as a black Korean-American, it’s worth reading his take, whether you agree or not:

Never has there been a discussion — in general — of the fact that black folks like myself get harassed DAILY on subways and buses and trains, but THAT never becomes an issue, no Korean thinks to flip on their cellphone to start making YouTube videos. I don’t condone this young man’s type of behavior, BUT I UNDERSTAND IT.

The idea continues that non-black/minority people cannot understand the situation from some ESL teacher named Eve (who’s identifies herself as a “minority woman”) who says among other things:

Even though I am not Black, I am closer on the social constructs of the crayon box than White people are. As a member of a minority currently being vilified, exploited, and used as a scapegoat in the U.S., I’m a member of a class of people (non-White) that has been where you, as a White person, have never been. You think you’ve experienced “racism” here in Korea because you’re White?

What you are experiencing is not racism. It is “anti-foreigner-ism” and it’s not the same.

A David Wills takes a rather rational view of the situation, pulling few punches:

The problem would never have arisen if the black guy had bothered to learn a little Korean. I admit that my Korean skills during my first months in Daegu were a little lackluster, but I still knew the basics, and I knew that 니가 was certainly not a racial slur.

The problem would also have never arisen if the guy had kept his fucking voice down in the first place. By the time I left Korea I had begun to realize why there’s so much racism there in the first place – it’s partly because foreigners act so fucking dumb. Americans in particular are guilty of being LOUD. Not just raising their voices, but practically shouting at each other on buses and in the subway. It’s humiliating to be associated with them.

But, like I mentioned, there is a ton of racism in Korea. It’s not all the fault of the foreigners, of course. Koreans don’t just hate blacks and whites because we’re loud – but we don’t help ourselves. And when we act like idiots and flip our shit over absolutely nothing, then we trivialize the genuine problem.

Robert at Marmot’s Hole advises the assailant and all foreigners for that matter to learn the language and to lower their voices when on the phone in a public place:

To Foreigners in Korea: Please learn a little Korean

…in addition to learning a bit of Korean, please, for the love of Christ, keep your voices down when speaking English on buses and subways. You might not notice, but your voices carry, and it can be seriously irritating.

And, of course, what would this be without Robo putting in his two cents or a few wooden nickels and then trying to find a way out of a bind (blame it on Google!):

Yes. I used a word in the title there that I never use in real life. One of only about two I never use. Maybe I’m throwing a rock at a hornet’s nest, but I hope not. I’m not an expert on this specific set of race issues, and would never pretend to be one.

[added August 30] I’m aware there’s a lot more going on here that I’m not really qualified to comment on, either through personal experience or through careful study…

but I think my readers are sharp enough to know I’m not using the word in the title to insult or marginalize anyone, and to see that I haven’t spoken on behalf of anyone who didn’t ask me to speak of their experiences.

The reason I used the word, and used it in the title, is because somebody’s going to be called that word, and go to google to find out whether they actually heard the word they thought they heard or not. And if I don’t use the word, this post won’t show up when they google it, and they won’t get the explanation they need.

And then we have the Korea Times with it’s always reliable and thorough coverage.

3WM only cares to say that unless the old man hit him, spit on him or attacked someone he was with, the American erred and will have to pay for it.  No, I am not a “minority” (as it is defined in the West) but I am a minority here in Korea like every other foreigner on the street.  I’m well aware of the difference between whites (like myself) and people from southeast Asia and African-Americans, Latinos and so on.  Korean’s discriminate plain and simple–they even discriminate among themselves; the darker skinned, the North Koreans.  There is no argument there.

However, conducting yourself in public and not letting someone turn you into a monster for a camera is your responsibility.  I have no doubt that the Korean man did something wrong and likely discriminatory, but the younger man fell into the trap and lowered himself to that level.  As Lincoln said:  “If we could first know where we are, and whither we are tending, we could then better judge what to do, and how to do it.”
This was not what to do nor how to do it and the young man is going to–if he isn’t already–wish he’d never flown off the handle.