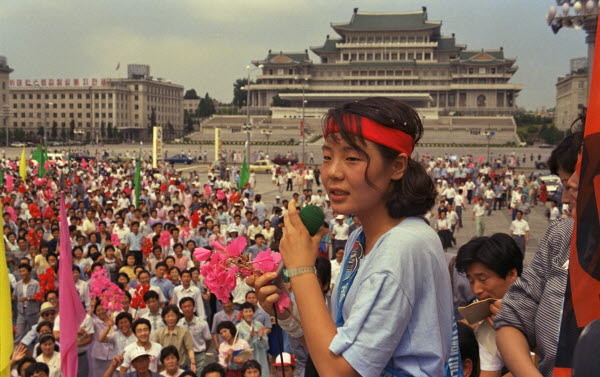 What can be done to change North Korea? The outside world has tried both pressure and concessions – to no avail. One should not be surprised by this. North Korean society is designed in a way which makes it remarkably immune to both pressures and bribes from the outside world – and, of course, North Korean leaders have their own, very valid, reasons to do what they do. As long as the Kim family stays in power, North Korea is not going to surrender its nuclear weapons or start Chinese-style reforms.

It is not incidental that for decades the North Korean government has maintained the policy of self-isolation which has ensured that the average North Korean knows little about the actual situation outside the country. Only as long as such isolation is maintained, he or she will take seriously the claims of the official propaganda, which for decades has described a tiny and impoverished North Korea as a beacon of prosperity, admired by the progressive peoples of the world and, especially, by the suffering South Koreans, alleged victims of the bestial U.S. imperialists.

The problem with this propaganda picture is clear: it is patently false and cannot stand any exposure to uncensored – or insufficiently censored – truth. Any contacts with the outside world are corrosive and, as such, they make North Korean people question the officially prescribed worldview. In due time, these doubts are bound to produce some pressure on the regime which will either change or fail.

In some cases, such exposure can happen with full approval of the North Korean leaders. A good example is Kaesong Industrial Zone where some 50,000 North Korean workers remain in daily contact with about a thousand South Korean managers. North Korean decision makers might see the project as a money-earning scheme, but the earlier experiences have shown that contacts with the outside world might be ideologically subversive even if scripted and controlled, and even if the other side is quite willing to follow the prescribed rules of behavior.

A good example is a story of Yim Su-kyong, a relatively prominent figure of South Korea’s pro-Pyongyang Left. Recently elected to the parliament, in early June she acquired a measure of notoriety after a chance encounter with a North Korean refugee at a restaurant. In her angry tirade Yim Su-kyong described the refugees as traitors and said that he would kill a pro-refugee political activist with her own hands, and also explained the refugee his proper station:  “How can a son of a bitch like you, a North Korean defector of humble birth, come and challenge a lawmaker of the South Korean parliament?” She apologized promptly, even though the sincerity of her apologies has been much doubted.

At first glance Yim Su-kyong looks like a hardline neo-Stalinist, somewhat akin to French intellectuals of the late 1940s who (like Sartre and his coterie) claimed that there were no prison camps in the Soviet Union and everybody who said otherwise was clearly a stooge of the US imperialism on the CIA payroll. But a more careful look reveals a different picture. While in the depths of her heart Yim Su-kyong might indeed harbor quite positive views about the North Korean regime, there is hardly anyone who has done so much to damage the Kim regime, in both its power and authority over its people.

It is not surprising that the unlucky refugee who approached Yim Su-kyong at the restaurant wanted to talk to her. But for a majority of North Koreans, the name of Yim Su-kyong is probably the most easily recognizable name of any other South Korean (with the probable exception of some South Korean presidents, better known to the North Korean audience as “blood-sucking national traitors”, “fascist dictators”, and “U.S. lackeys”).

Yim Su-kyong’s 15 minutes of fame (well, rather her one-and-half-months of fame) occurred in the summer of 1989. In 1989, Pyongyang hosted the 13th World Festival of the Youth and Students, a rather amorphous but large-scale gathering of left-wing youngsters from around the world.

In those days pro-Pyongyang sympathies were very common among South Korean university students. They envied their North Korean peers who, they thought, could happily live in a working class paradise where riches were shared by everybody and where people enjoyed free medical care and free university tuition. Twenty years ago these fantasies were shared by many a young intellectual, and so pro-Pyongyang groups enjoyed great popularity on South Korea’s university campuses.

In 1989, one of the largest associations of this kind decided to send representatives to Pyongyang, to attend the extravaganza of the Festival. The ROK government, still fervently anti-Communist, refused to authorize the plan, but Yim Su-kyong, then a student of French at the Hanguk University of Foreign Studies, went to North Korea in defiance of her government.

In Pyongyang, Yim Su-kyong was met with great fanfare. The North Korean propaganda machine portrayed the girl as an authentic representative of South Korea’s university students, whose dream was allegedly to live in the North Korean paradise (oddly enough, some of them were sufficiently silly to have such dreams indeed). Her 46-day stay in the North was the subject of much propaganda. Yim Su-kyong got the nickname “flower of unification” – the sobriquet is still occasionally used by South Korean hard-left media outlets.

Predictably, Yim Su-kyŏng did not say anything which would embarrass her hosts: all the expected talks about the sweetness of unification, harsh attacks on the then Seoul government and the US imperialists were duly delivered. Nonetheless, Yim Su-kyŏng behaved in a way which was highly unusual for her North Korean audience. Her speeches were clearly unscripted, and in the official situations she acted with great ease. In some cases she even made mildly critical remarks about how her meetings with the North Koreans were arranged – an unthinkable act for any North Korean youngster who would be appointed to embody some glorious case.

Yim Su-kyŏng even became a fashion trend-setter. In subsequent years North Korean women imitated her dress and her hair cut.

After her stay in North Korea was over, Yim Su-kyong was sent back to the South via the DMZ – on the calculated assumption that she would be immediately arrested. Then, she stood a trial and was put in prison since an unauthorized visit to North Korea was – and, unfortunately, still is – a crime under South Korean law.

However, the North Korean authorities made a serious mistake: the official media continued to inform their readers about Yim Su-kyong’s fate. With the wisdom of hindsight, it is clear that it would be better for the Pyongyang propagandists not to advertise what happened to Yim Su-kyong next.

In North, a person indicted on political charges disappears forever. Even if such a person is lucky to survive and being eventually released from a prison camp (such things do happen occasionally), he or she is condemned to spend the rest of his or her life exiled to remote part of the country, being eligible only for the least prestigious manual jobs. It has been the case for decades, and probably most North Koreans came to perceive such treatment as natural. After all, political criminals are enemies of the state and nation, aren’t they?

So, North Korean audiences were truly surprised when in the early 1990s a North Korean TV crew interviewed Yim Su-kyong’s family in their Seoul apartment – even while she herself was in prison. They were surprised to see that the family of a politica 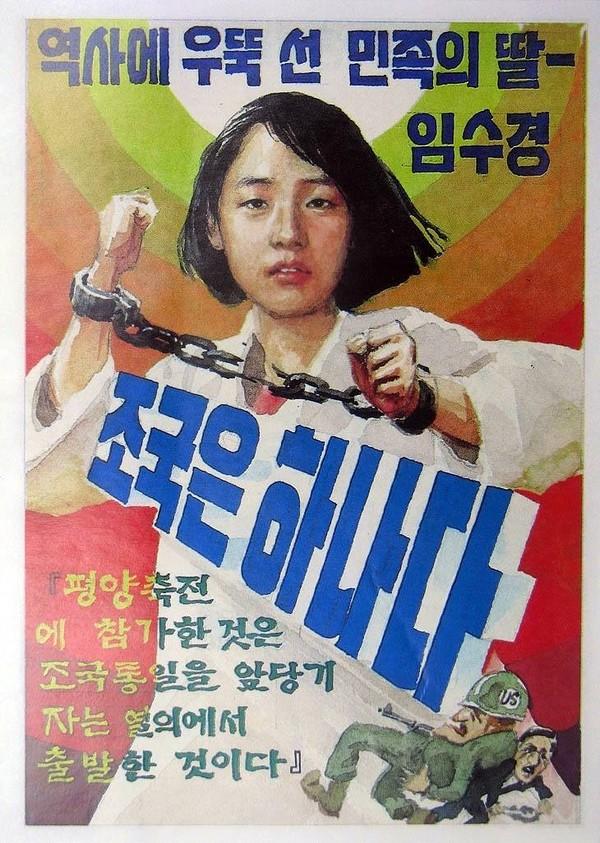 l criminal was allowed to stay free, and even talk to foreign journalists. It was a shocking discovery indeed.

Obviously, North Korean propaganda specialists belatedly realized their mistake, so from then on Yim Su-kyong ceased to be reported on in the North Korean media. Even when she visited Pyongyang again in 2001, the official media did not attract much attention to her presence. Actually, many defectors to the South are still surprised to learn upon their arrival that Yim Su-kyong is alive, free and engaged in political activities. This once again confirms to them that Southern ways are strange and incomprehensible indeed: nothing like this can possibly happen under the wise guidance of the Kims.

The entire Yim Su-kyong affair is often presented by South Korean rightists as a case of the South Korean left unwittingly helping North Korean propagandists. However, from my frequent interactions with North Korean refugees, it is clear that the opposite is actually true. When asked which events made them doubt the official picture of the South as a hell of repression and destitution, many of them mention Yim Su-kyong’s visit to Pyongyang. As one of my interlocutors recently said: “I used to believe that South Korea was a poor country, and a brutal dictatorship, but I changed my mind after Yim Su-kyong’s visit”.

Yim Su-kyong was known to come from a modest family – but she was dressed much better than children of North Korean ranking officials. She delivered the official line, but spoke with great freedom and sincerity. After her return, she was not summarily executed, and her family did not suffer from discrimination. All these things did not fit into the then officially approved picture of the South, and greatly contributed towards the shattering of this facade.

The experiences of Yim Su-kyong might be another proof of why exchanges with the outside world are the best and surest way to change North Koreans’ worldview and, hence, eventually, change North Korea. Objectively, Yim Su-kyong was a nearly perfect propaganda tool for North Korean officialdom, but in real life her widely publicized visit had the opposite effect: it produced serious cracks in the officially endorsed (and grossly distorted) picture of the outside world.

Jeju Island: Blood, Beauty and the Need for a Naval Base