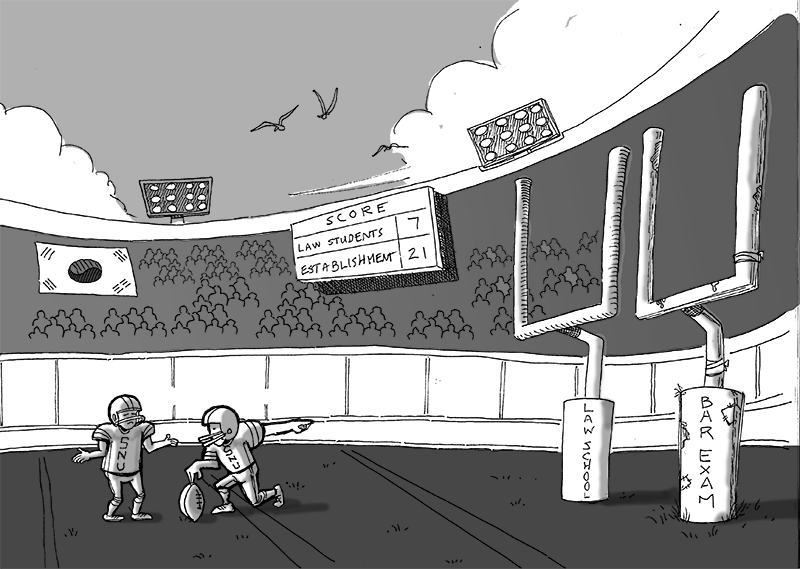 After finishing my undergraduate studies in New England two years ago, I came back home to pursue a career in law. All had been going well, and in November, I was preparing for final exams to finish my second year in law school. But on December 2, most my classmates reported hearing rumors that that the Ministry of Justice had put an embargo on a press conference to be held the next day. Reasons for the embargo had not been given. All we heard was that the conference would be about the phasing-out of the Judicial Exam (aka the Korean Bar).

Then, the next morning at 11 a.m., the rumor came true. The Ministry of Justice announced that the official stance of the government was for a four-year delay in the phasing out of the Judicial Exam. That afternoon, law school students around the country—there are approximately 6,000 in total—assembled at their respective schools, and voted for resolutions that called for all students to submit official school withdrawal requests to refuse to partake in all classes and tests. Third year students (aka 3Ls) who are expected to take the exam in early January, also voted to refuse to sit the exam. All of this may seem rather bizarre to those unfamiliar with the legal education system in Korea. One may simply ask, “Why would law school students protest when law schools have nothing to lose?” Well, it’s not that simple.

The Judicial Exam has been the traditional method of “selecting” qualified individuals to be legally trained since 1963. In the law school system (just think of the U.S. counterpart), one, in most cases, goes through formal legal education and then passes the Bar Exam. Under the Judicial Exam system, individuals prepare legal knowledge to pass the Judicial Exam, and upon passing the rigorous exam, enter the Judicial Research and Training Institute for a two-year training program.

Passing the state-run Judicial Exam was a symbol of privilege, it was a sign that you were smart, that you persevered, that you beat one of the heaviest academic competitions in a country where such competitions commence in childhood. To “pass” the Judicial Exam, one has to go through the 1st Exam (multiple choice), 2nd Exam (written answers), and final test that consists of personal interviews (almost all candidates pass the third test).

The Judicial Exam acted to limit the supply of lawyers in the market; only in the 2000’s did it allow 1,000 entrants to the Training Institute (back in the 70’s, only 200 were admitted). The golden promises of prestige, wealth and honor came at the expense of those who never reached the end. Such promises lured “too many” people into the Judicial Exam. Historically, only three percent of applicants succeeded in getting admitted to the bar. Undergraduate education floundered since grade point average was not a factor in selecting qualified individuals to enter the Training Institute. Education in Law College was centered almost exclusively on theories and graduate studies, and students of other disciplines flocked to private institutions that provided prep for the Judicial Exam instead of developing academic competence in their own fields. The competition became increasingly fierce–the difficulty of the exam increased each year and students had to concentrate all their energy on preparing for it. There was also the problem that came along with the artificially controlled supply of lawyers; the graduating “class” of the Training Institute formed very close ties and the hierarchy among graduating classes continued well after the trainees were admitted to the Bar.

So the discussion began in 1995 to change the legal education system. More than 10 years and 80 hearings later, Korea adopted the Law School system. In all honesty, it was very, very out of the blue. I was enjoying my freshman fall in the States when the bill went through as a result of  political compromise. I had no idea I would apply to law school back then. Under the new system, students needed to have finished their undergraduate studies, taken the Legal Education Eligibility Test (LEET), finished three years of law school, and taken the Bar Exam.

As great need existed to protect those who had been preparing for the Judicial Exam, the plan was to phase out the exam. The phase-out was initially planned to end in 2012 but in the face of vehement opposition, it was postponed to 2017. Students began entering 25 law schools in 2009. There was some disharmony here and there, mishaps now and then, but the system slowly began to root itself.

But, beginning in late 2012, law schools were attacked for high costs and lack of transparency. Tuition varies among schools but is roughly in the range of $6,000 to $12,000 each semester. Interviews required in the admission process gave rise to conspiracy theories that the interviewers made unfair evaluations of law school candidates, and the non-disclosure of the Bar Exam scores (previously required by law but recently struck down due to its unconstitutionality) led to criticisms that law firms were hiring candidates with elite family backgrounds.

Leading the attack were young lawyers who passed the Judicial Exam rather recently. Most believed these young lawyers based their attacks on a sense of justice while others suggested a conspiracy theory-ish story that portrays young lawyers, who are threatened by what they deem as an over-supply of lawyers, as trying to limit further bar admits. And the media began its bashing too. Law school students were labeled “gold spoon,” akin to the silver spoon expression in English.  Any suspicion of any wrongdoing was reported as if it were true and all blame was directed at the law school system. (This is like saying Donald Trump’s utter ignorance is attributable to his Wharton School education.) The public mostly soaked up this propaganda as self-evident truth.

What did law school students do? Nothing. They believed that such false propaganda and factoids would disappear with the benefit of time, although probably not soon; at least once the Judicial Exam was phased-out, they expected fairer evaluation from the public. But the propaganda stuck. Politicians joined in, calling for the continued existence of the Judicial Exam, which, to the public eye, has become a symbol for fairness. On the point of “fairness,” granted, the Judicial Exam is “open to all.”’ But why would affirmative action ever make sense if “open to all” was all that matters? Anyone can apply to any college they wish.

So came the protest. And here are some personal observations and thoughts.

Well, not much has transpired–we ended our strike and took our final exams, and the 3Ls took the Bar Exam.

We’re waiting for a Congress-mandated committee to come up with a solution. The committee’s recommendation will likely be passed into law unless something extraordinary happens (I can’t imagine what such a thing would be). The committee consists of government agencies, law schools, etc.

So from the students’ perspective, nothing’s certain and anything can happen.

With the North Korea situation and the National Assembly election due to be held in April, the committee may be very slow in its decision-making. But, again, nothing’s certain. That’s what we live with.

The author is a student at Seoul National University School of Law.