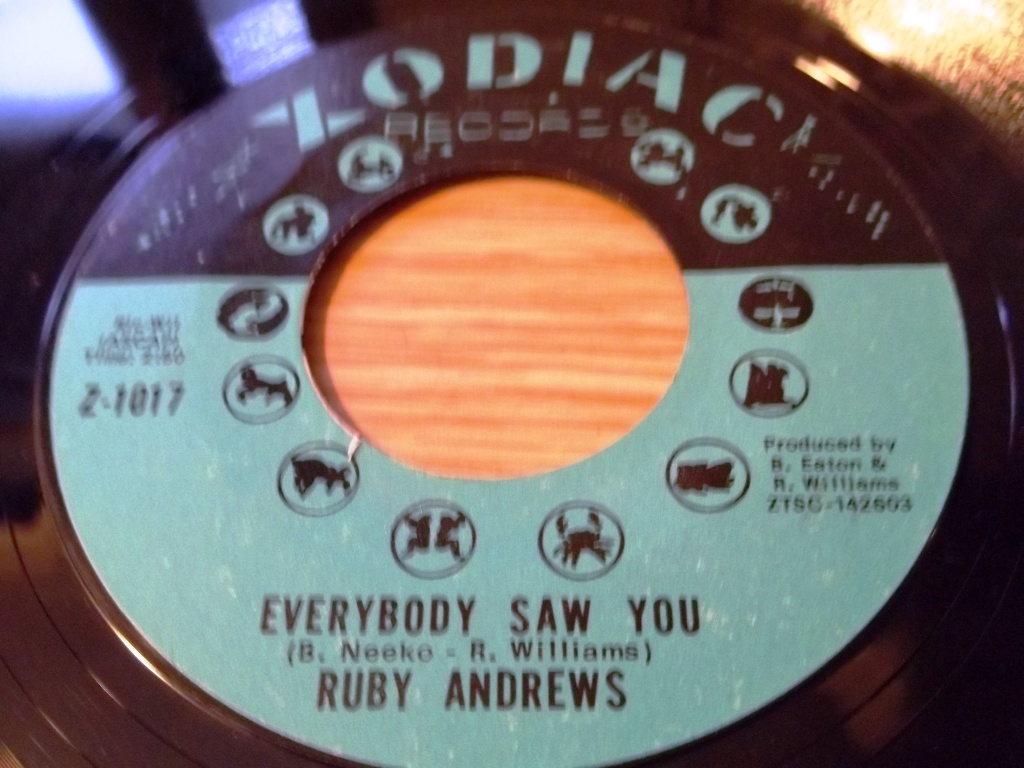 Ruby Andrews (nee Barbara Jean Stackhouse) is a soul singer based out of Chicago. She primarily recorded for the Zodiac label, also from Chicago, from 1967 to 1972. Of the fourteen 45s she recorded during this time frame, her biggest smash was “Casonova (Your Playing Days Are Over)” in 1967. This track reached #51 on the U.S. Pop charts and #9 on the U.S. R&B charts. You can easily track this tune down on YouTube.

For this installment of Funky Seoul Corner we go a wee bit later in Ruby Andrew’s career to 1970. “Everybody Saw You” is a typical offering from Ruby. You’ve got soul, you’ve got groove, and you’ve got dynamic changes within the track. This track was a minor hit in its own right, reaching #118 on the U.S. pop charts and #34 on the U.S. R&B chart.

Even though I own three Ruby Andrew’s 45s, I believe I have yet to play one of her tracks when I DJ. If I did, I would have to play her when I’m spinning a mellow mid-tempo set. Problem is, only rarely do I get a chance to play my slower paced tunes. I wish I had the opportunities, but most of the time I play I feel the need to spin the up-tempo numbers to keep the audience captive. All the same, I love her stuff and offering her up on Funky Seoul Corner is a great way to showcase her talent.

In doing my customary research on Ruby Andrews, I also came across a very interesting and well-written article by Natalie Elliot on the Oxford American: The Southern Magazine of Good Writing website. (Here is the link, if you are so inclined: http://www.oxfordamerican.org/articles/2011/dec/05/ruby-andrews/) Titled“Ruby Andrews: Mixing with an Obscure Soul Goddess,” Eliot seems to have gotten her information about Ruby Andrews from Andrews herself! The article gives the reader the low-down on music and her life, giving fascinating details about her years growing up and cutting records for Zodiac. I figured I would just give you the link to the page instead of just quoting everything from that article and pasting it here. Hope you enjoy!