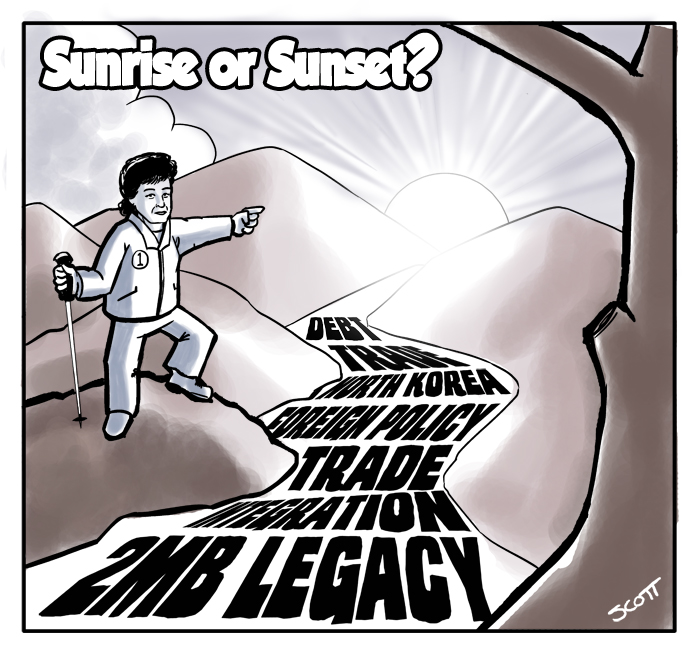 With the election of Korea’s first female president, Park Geun-hye, on Dec. 19, 3WM asked three young Korean women to reflect on the historical event and what they see in Park’s next five years.

Many middle-aged and elderly Koreans seem to be worried about the low voting rate of the younger generation this election, especially of the 20s, who showed the lowest election turnout of all the age groups. Yet, as a 21-year-old Korean female, during the past few weeks, I learned more about the presidential campaign from fellow friends in their 20s than from anywhere else. For the past month, my Facebook newsfeed was filled with posts discussing some aspect of the presidential election. Every day, I would scroll through expressions of disgust after watching the presidential debate (mostly about Park’s “old” handbag), heated Facebook wall debates between friends, and humorous videos and images parodying the nominees. Fellow friends who came as exchange students bragged about having had the chance to vote before all their friends in Korea, snapping pictures of themselves in front of the Korean embassy or consulate general in New York, Toronto, or Berlin. In turn, this week, friends back in Seoul posted updates encouraging each other to vote, sometimes attaching a photo of themselves making V signs in front of local voting stations.

For Koreans in their 20s, Park is not a new face. From an early age, many of us have seen her on TV and in newspapers. For many of our parents, especially those from the southwestern Jeolla region, she represents the vestige of dictatorship, but for many of their children, she has always been another politician, a regular fixture on the news and a household name. Though many of our parents (who probably influence their children’s political views the most) spent their 20s under a dictatorship, they have grown increasingly conservative with age. Plus, Korean college students no longer have to fight for democracy; these days, no one goes out into the streets to protest except for matters related to tuition and employment. Unfortunately, many of us simply do not have the time to reflect and weigh each candidate’s promises, let alone contemplate the political state of the nation. Many of us are too busy finding internships, preparing for goshi (state exams) and working around the clock, getting used to the corporate world.

Still, many of my female friends (myself included), were excited merely at the prospects of having a woman lead the country for the first time in a thousand years. Korea would be the first East Asian country to have a female president, and many of us hoped that her election alone would somewhat unwind the deeply ingrained Confucian culture of paternalism. Many news outlets have explained that gender wasn’t as big a factor in this election. Yet we have heard our mothers mention when they first saw Park enter politics in her 20s, when she was forced to act as a first lady on behalf of her murdered mother. My mother still marvels at how Park has managed to stay afloat for as long as she has as a woman in Korean politics.

Some of my college friends were lured by Moon Jae-in’s promises of slashing tuition by half by next year, and his promises of preparing an “employment preparation fund” that would provide young unemployed Koreans with 50% of the minimum wage every month. But it seems that many of us now equate increased expenditures on welfare with heavier taxes that we will have to bear in the future. Regarding security issues, many of my friends, as is the growing trend among the younger generation which has almost no ties to North Korea (except for some relatives from the North who may have passed away years ago), do not view North Korea favorably, and oppose unification.

Furthermore, many of us have become just too apathetic. Our lives to this point have not been as tumultuous as our parents’ and grandparents’ were. Politics did not play as big a role as did K-pop and TV shows. Nevertheless, though some of us may have been disappointed with the election results, the feeling will soon pass; ratings will go down in five years anyway, and sadly, we should be preparing for the next big final or project coming up, for those things more directly affect our lives at the moment…

Nevertheless, I would like to applaud Park for her victory, for finally receiving the limelight and for being the first Korean woman to do so. Though I don’t think it really matters who won at this point, I just hope that she keeps her policies, especially those regarding youth employment and policies towards women.

Elena Jang, 21, is a junior doubling majoring in comparative literature and culture & political science at Yonsei University. Currently she is in the middle of her year as an exchange student at Dartmouth College.

The Patriotism of Korean Youth and Hopes for Park’s Policies

One Korean newspaper once asserted that patriotism is the trait of modern Korean youth and this trait would be the primary factor in then candidate Park Geun-hye’s victory.

It is true that most Korean youth wanted to change the government power to another party from the Conservative Party (aka the Saenuri or New Frontier Party). They were expecting an innovative force to lead Korea and Ahn Cheol-soo, who eventually bowed out of the race in late November leaving Moon Jae-in to face Park, was the individual whom many Korean young people thought of as that innovative leader. Still, the opposition party believed in the young generations’ aspiration to change government power. Consequently, most people thought if the voting rate increased, Moon would definitely win. But the result was different. The fact that Moon was more amicable to North Korea compared to Park, triggered the young generations’ patriotism.

Moreover, Park provided much more realistic pledges while Moon was too radical. For instance, because of the problem regarding punishing sexual offenders (a number of heinous sexual crimes have occurred over the past few years with light punishments) people supported Park, who proposed the initiation of chemical castration.

Lastly, Park’s image as the daughter of Korea’s Napoleon (a dictator who led Korea’s economic development–Park Chung-hee) helped her gather votes from the older generation. Those people think her father allowed Korea to escape from chronic poverty after the Korean war. Also, many of them feel pity that she had to lose her parents at a young age.

And I think these are the common hopes of Koreans, including myself:

– Still, the regional gap in Korea is too big. The region of Jeolla-do has been lagging behind for a long time.

Also, housing should be evenly distributed.

– Recently, the mayor of Seoul, Park Won-soon, said that Seoul City will provide tuition for universities so that students do not have to pay that much money. However, that money would come from the nations’ increased tax. Accordingly, this is not an appropriate solution. Also, there is no need for providing tuition of students from rich families. There should be a realistic graded approach.

– Furthermore, Park asserted she will reform the current education system that focuses only on college entrance exams to one that enhances each student’s potential. But considering the reality, many parents put more emphasis on entering high status universities.  Park needs to offer a pragmatic solution.

3. Park needs to maintain the hard-line policy against North Korea.

– This is why many people supported Park.

And most of all, many people want Park to be different from President Lee Myung-bak even though they are both Conservatives.

Kim Seo-ra, 18, is a graduating senior at Daewon Foreign Language High School and will be entering Korea University in the spring.

I appreciate the fact that the turnout for Korea’s 18th presidential election was very high (a reported 75.8%), showing many citizens are concerned about the future of the nation. However, it is hard to accept Park’s victory for a few reasons.

First, one of the points of view about the election was “a dictator’s daughter vs. a human rights lawyer who had been imprisoned because of his prodemocracy movement.” Though Park herself was not a dictator, many students here in Korea think that Park should bear some responsibility for her father’s abuse of power instead of trying to take power. Especially, when it comes to the people who had suffered severely under Park’s dictatorship (like those who lost their family due to torture, or faced torture themselves etc.), we can assume that they would consider Park’s seizure of power unacceptable. And many of us think Moon deserves more respect for the things he has done (fighting for democracy and working as a lawyer for human rights).

Second, I’m wondering whether Koreans truly want new politics and a better economy. I have seen so many articles, news reports, SNS messages, and so on. demanding change. However, the last general election and even the presidential election ended with the victory of the ruling conservative party. Admitting that a conservatve party is capable of reformation, every Korean can see that Saenuri (or New Frontier) party and Park have done little for a better society. Being a majority party, they could have passed new regulations and laws but they haven’t. Many people say they have suffered during the last five years under President Lee Myung-bak’s government. Then, why don’t they give a chance to the opposition? Yes, I understand Koreans’ distrust of the Democratic United Party and I myself am not a supporter of it. Nonetheless, if we are to make some changes to improve this reality, it is obvious that voting for a candidate of the ruling party is not the best choice. It is doubtful whether President Park and Saenuri will carry out their promises when they had not passed similar laws in the past.

Third, the TV debates. Voters had the chance to examine the candidates’ capacities, attitudes, thoughts and policies through the debates. Park’s words were not clear; her policies were vague; she did not answer Moon’s questions clearly and could not refute Moon’s arguments. When I watched the debates, I expected that more people would go for Moon as a result of his performance. However, it seems that the debates did not have that much impact on voters’ minds. Overall, Koreans seem to still be influenced by local, regional feelings rather than their political creed built up prudently with their true thoughts and experiences, which makes me feel sorry. I have more things to say, but I’ll stop here. The most sad thing about this election, to me, was the fact that I did not have suffrage due to my age.

Anyway, Korea’s new president, chosen by the majority of Korean people, was elected. Now we should watch what President Park and Saenuri do.

Angela Kim, 18, will be entering Seoul National University in the spring to study philosophy. 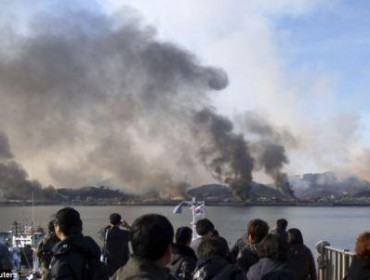