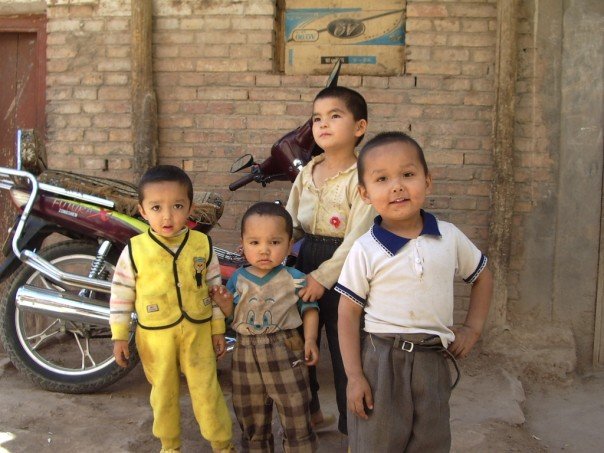 I’d been living in Australia for 8 months and I was bored and broke. Things weren’t working out. English First China said I could be on a plane, sorted with a flat and a visa and teaching the English within 10 days. Sure, why not, but where? I’d been to the east before and was pretty under whelmed; grey, built up, hyper consumerism.  I’d been to Mongolia too and had been blown away; the steppe, the space, horizons, crazy dudes on horseback. I like remote, you never know who’ll blow into town. So, I figured as far west as possible. A clumsy calculation I realised, but it felt right. West had always seemed to work out best.

When I first arrived in Urumchi I didn’t really understand what an Uighur was. Muslim and ethnically Turkic that was about all I knew. Within two weeks I had fallen in love with one. He was tall and strong, with thick black hair and grey blue eyes – like a wolf. But he was sad. Sad because he wasn’t Chinese but his identity card said he was. The card that spelt his name incorrectly, and had his birth date wrong. The card he frequently had to produce to armed police, as they patrolled the run down streets of his neighbourhood.

He told me that I was in East Turkestan not Xinjiang. I could see that I was. The best kebabs; lumps of sheep skewered and cooked out in the streets, chaotic markets selling Turkish like carpets and knives and furs, young boys baking flat nan bread in clay ovens calling out as they vied playfully for trade, old arched doorways, winding alleys, mosques, street music, the bustle and the hustle; life on the streets. I loved it.  These streets however, were being swallowed up. Swallowed up by migrant Han and the greed of development. Turn the corner and you were back in China. Rip off electronic shops, shopping malls blaring generic techno, ditsy Hello Kitty like tack. Two cultures living in one city. Distrusting and disapproving of each other and divided on every level; even time. The Han and commerce, operating on Beijing time, the Uighur and the sun, operating two hours behind on Xinjiang or local time.

Urumchi is the furthest city in the world from the sea. It’s a four hour flight from Beijing and a four hour flight from Moscow. Its surrounding scape is extreme. Near the Kazakh border it is surrounded by the Tien Shen mountain range; its white peaks providing a backdrop to the city. To the south the Taklamakan Desert. It’s in the province of Xinjiang translated literally as ‘New Frontier’. Xinjiang is huge: it shares borders with Russia, Mongolia, Kazakhstan, Kyrgyzstan, Tajikistan, Afghanistan, Pakistan and India; it is the heart of Asia. Formally East Turkestan the Chinese took it apon themselves to ‘liberate’ it in 1949 and in 1951 it was declared the Uighur Autonomous Region of China.

I spent a year living and working in Urumchi. Part of me never wanted to leave and a part of me I left there. Unaware at first, but as time went by, the sadness that I had first seen in him I began to see in others. Sometimes it seemed to hang like a cloud over the whole city. As I made more friends I heard more stories. Stories of children being beaten in school for speaking Uighur, not Mandarin, of passports being confiscated and never returned, of people losing jobs or never getting them, of people disappearing. I began to see the poverty of an oppressed people. Grown men unable to work with nothing to do. The humiliation of oppression is toxic. You don’t see it at first but it permeates everything. Your powerless against it and resigned to just carry on with life as normal. Or not, as recent events have shown.

On the 5th July 2009 I woke in my flat in Seoul and like any other morning brewed coffee and logged onto the obligatory Facebook. A friend who I had shared a few litres of tequila with during my year in Urumchi had posted a YouTube link. I opened it. It was footage from someone’s mobile. Shaky and around three minutes long, it was taken from a flat window and looked down on a crowd of maybe 200 marching through the streets. What were they shouting? It was difficult to make it out. Uighur? Yes, they were shouting Uighur, Uighur, Uighur. Stunned. I tried to let what I had seen sink in but it still hasn’t really. I spent that day wondering what was happening and how the Chinese were going to respond to this brave yet reckless show of defiance.

The next morning I woke and listened to The BBC World Service. Urumchi was the main story. The top headline. Urumchi; my second home, a place I love and a place few had ever heard of. It was strange to hear reporters saying the words, that when I had spoken them, had been met by blank expressions; Uighur, Urumchi, Xinjiang. That day I spent listening to the news and searching for any information that I could find online. I learnt that the protest had been triggered by the arrival of news back to Xinjiang that 2 Uighur migrant workers had been killed in a vicious fight with Han migrant workers at a factory in Guandong, a city in the south of China.

Seeing Urumchi on the news I could transport myself there to the streets that I recognised and knew so well. It was summer. I could smell it and feel that heat. Simmering alongside the resentment, anger and humiliation that had been bubbling away for generations. I watched news reports online. The protests were now full on riots. Bloody riots. And they were happening right where my friends lived. I was searching the faces compelled and horrified. There were tanks, blood, the number of dead growing with each report soon into the hundreds. That day my heart broke and its never felt fixed since. Where was he? Were my friends safe? Late into the night I heard that soldiers had rounded up 1400 Uighur men. I could see the very doors they were kicking down. The mothers and sisters and wives pleading and screaming no. But worse than that I could see the very men they were dragging from their beds and bundling into the back of vans. I felt desperate. Where was he?

The following days I spent in a daze. I was a wreck. I hated being away from my computer. My only hopeful link to Urumchi and news.  I sat and watched images of burnt out shops and homes, a woman standing in front of a tank screaming and demanding for her men back, revenge attacks with homemade weaponry. More blood, more dead, more rounded up. I sent scores of emails and repeatedly telephoned any numbers I still had desperately trying to make contact with someone there. My Urumchi friends living away were doing the same. Heartbreaking pleas on Facebook for news of loved ones. The lines were down and all internet access blocked. The city was on lockdown.

That was over 6 months ago now.  If I had known then that I would still be unable to contact my friends in Urumchi I don’t think I would have been able to cope. The Chinese government has maintained a complete block on the internet throughout Xinjiang and phone lines are still down. This Autumn I watched on the news as Obama toured China. Grinning and bowing and talking trade. Nothing on the hundreds maybe thousands still missing, or the fact that a province twice the size of France is living in a complete communication blackout. I felt real anger with the world, and then just sobering disappointment.

Thankfully some news has got out. Word from friends of friends: snippets here and there. It was sometime in September that I received an email from him. He was alive and safe. I was elated. He was depressed. Visiting a city in the east for a few days he was able to access his hotmail account. We exchanged several messages. He told me that life was much worse than before. He couldn’t go into details. He asked me what the outside world thought. “Does everyone know about Uighurs now?” he wrote. “Yeah, lots of people. It was big news” I replied. The ‘was’ staring back at me from the computer screen. “People don’t care do they?” he later asked. “They care about Tibet. Why not us? Its because we are Muslim, they see that and think we’re terrorists, don’t they?’ I didn’t lie to him.

The Silence of Salinger