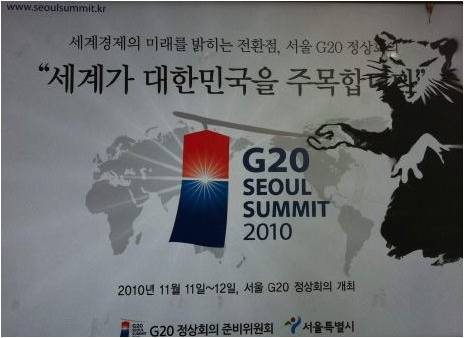 This is what some people feel like about the the G-20 meeting: president mouse invites nineteen foreign mice to his mouse hole where a lot of mouse police are scurrying around on high alert. Two men, one of them a university professor, reportedly went as far as to go around painting rats on G-20 posters (see pic on right) supposedly as an “act of humor.” President Lee Myung-bak has been called “Gee,” a word meaning mouse (or rat) in Korean, by those who think he serves only the rich (and because he may share some facial qualities). So speaking of “G”-20…..

The government has done a very good job of letting everyone know that this two-day event will be disrupting their daily lives. Drivers are discouraged from using their cars for the 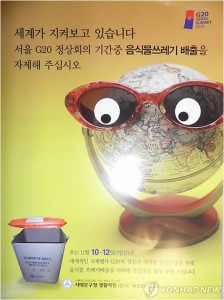 “guests’ convenience,” trash cans in subway stations are gone (someone might drop a bomb in one), a movable 2.2-meter-high (7.2 feet), 1.6-kilometer-long security fence will be erected near the Summit sight, COEX, where people are already being stopped at roadblocks for checks, while the yellow poster on the left reads “Do not produce food waste during the the G-20 summit. The world is watching.” So watch your table scraps! Bloomberg called all this “G-20 Mania.”

For street-vendors, the homeless, and migrant workers, the G-20 mania has proved a nightmare. The cleansing was so severe that Streetnet International is dispatching its coordinator to Seoul along with a letter saying “Street vendors and homeless people are not trash.” As I am writing this post, another migrant worker is reported dead after a violent crackdown.

Amidst all this fuss, not many are focused on talking about what the G-20 itself means to people’s lives. Capitalism had become a weird structure that regurgitates dollars that often exist only in numbers. These numbers were housing, jobs and food for the sheer majority of people who did not live on Wall Street. So when the 2008 Financial Crisis proved how dangerous this playing-with-numbers was, the sensible solution to the crisis was to stop the finance capitalism altogether. But what America and its friends, the so called G8, did was form the G-20 to put out the big fire and carry on sustaining the unsustainable. What makes this miracle of sustenance possible is the powerless and the poor. Take more away from the have-nots so the G-20 can have a miracle, ta-da.

The IMF, World Bank, and the WTO, which have been awarded with more authority by the the 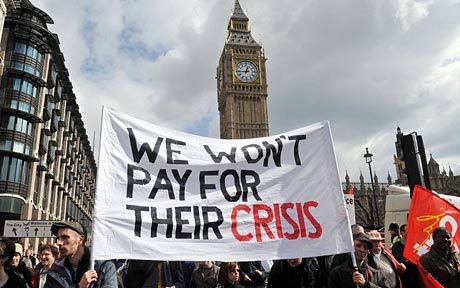 G-20, are the ones that have spread inequality under the name of neoliberalism. This leads to why countries like Greece, France and the UK have been cutting their public spending, albeit not without extensive protest from their people. Even more disaster has come to the third world countries, as aid has been reduced due to the crisis in the developing world while that crisis seriously harmed the third world’s economies as well.

So, the South Korean government being so eager about the G-20 Summit must mean that it doesn’t really care about what’s wrong with today’s capitalism, about poverty, about human rights…oh whatever, as long as it is included in the new “leading” Group of Twenty. While South Korea is a prime example of a country whose people’s lives have become extremely unstable and unequal from IMF intervention in the late 1990s, the former-CEO-president and his loyal friends seem to enjoy the sweet fruits of inequality that grow in their bank accounts. This is exactly what the G-20 wants too see happen worldwide.

No wonder the Korean government has hurriedly passed new laws to completely ban any kind of rallying or picketing around the summit area during the two days for the sake of a “successful” G-20 Summit . The Samsung district, where tens of thousands go to work 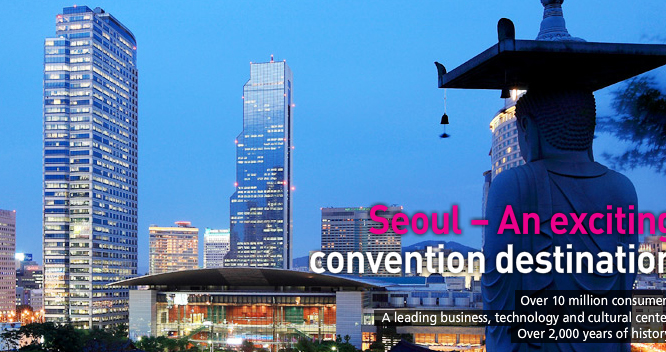 every morning, will go without public transportation for the summit period. The area’s COEX Mall where hundreds of sellers depend on their livelihood will be closed, as the site will completely be shut to the public.

By the way, the two citizens who drew that rat on the poster at the top were apprehended by the police for attempts to harm the “national interests” that a successful G-20 Summit will earn. So much for the grand conference, bravo.

Student journalist April Kim says: Finally graduating this spring (and I got into college) – high school was gross except for Iwazaru! Spending time waiting for my part-time job applications to be answered while picturing the grim future that should lie in front of me and my friends. Dear capitalism, begone!…or give me a job. Please. Contact me at imaginechange48@gmail.com