Stumbling upon “The Spirit Tourist”:  Onward to Chengdu’s Tao and the Need to fill my trip with something more than fake whiskey from a booking club—I think.

This is Part 2 of Jake’s Chengdu travel. Read Part 1 here. 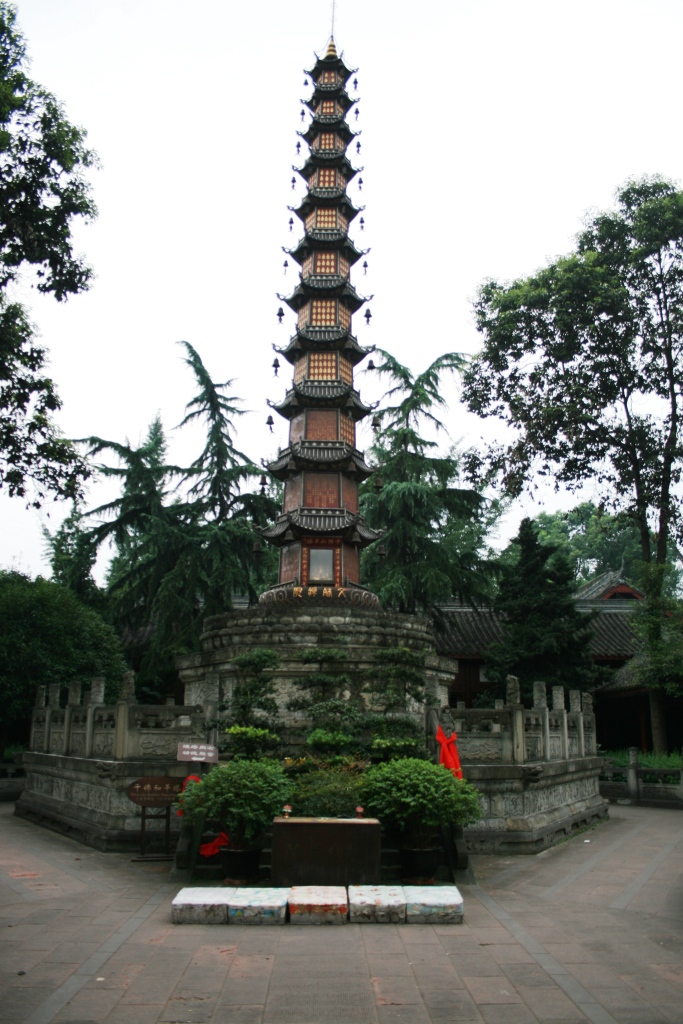 Chengdu might not be the frat party of China and maybe that’s a good thing. I would hate to think I went to a place just to sample the radial Dionysian outlets where the Sun rises in the East, sets in the West and what follows for me is another gripey hangover. Better to ask what was old China like in this neck of the woods? Well, Chengdu did happen to be in possession of the Tao which preceded Buddhism and is creating wonders still in effect today. Next to a KFC on any given street here you can yourself gazing into a lush garden tendered by skin headed, peace mongering Asians.

Most of us westerners living in China know the name Lao Tzu. He is, however, only credited with developing some of the philosophical and religious aspects of Taoism.  The Tao is ancient and has been around for at least 4700 years and is credited with influencing East Asian spiritual thought including Zen Buddhism, Chinese philosophy and Confucianism.

As for understanding this mysterious, cryptic and headache inducing philosophy that preceded Buddhism, I wish you good luck and pun that’s it just not my cup of tea. I first put my hands on the I Ching while in university as an existentialist indulging as a philosophy student. While the book never made the prestigious appearance on my computer desk, which was largely reserved for Marx and Hegel, it did have a short lived stint next to the sink in my bathroom and it still shows the damage to prove it. The Tao has been quoted by various literati and has even been deemed pop culture worthy with the phrase “The Tao of (your name here).” Everyone should have their own “way” or “Tao.” In contrast to its cheesy pop culture origins in the West, the Tao can offer contemporary insights in philosophy and culture for those traveling in the East. Including but not limited to: Post-modern existentialists, wayward Euros, recovering Goths, burnt out hippies, western one liner womanizers with the “fever”, retired couples, WoW addicts, Asian Studies enthusiasts and Eastern Religious tourists; you see the Tao certainly does include the whole Lonely Planet village. The latter of the list is a novel type of person who casts away their scientific reductionistic upbringing in the wake of arriving to Asia. Cryptic, enticing religions seem to draw out their inner Buddha or Krishna causing a wardrobe change as well as annoying, pseudo-enlightenment stage one-liners. It is what it is, be neither this nor that, just be (I can’t believe Nike hasn’t gotten a hold of that one yet), we are just balls of energy floating in space etc etc.

Asia is no stranger to tourists from the west. Some plague the readily available prostitution districts as sex tourists; others opt for the cheap crap shoot of plastic surgery with an unknown doctor and are medical tourists. Then there’s the non-showering, substance worshipping doof doofers seeking their next experience on islands at all-night parties where the music never changes: yes of course, the omniscient come to Asia as you are drug tourists.

e is a new poser afoot in East Asia. Here at a random Taoist temple in Chengdu, I am face to face with media warped, aspiring spiritual questers. Some pasty chick from Canada praying openly in front of anyone to see– particularly like the older Chinese had just done before her. Brandishing a massive stick of incense (for the excellent price of 20 rmb- about 3 U.S.), she’s a Buddhist for those two minutes spent on her knees letting thought replays of Kung Fu the legend fill up her mental space. Where’s the old dirty master when he’s truly needed? All we needed was a photographer to complete this hallmark moment that would surely sensationalize all who got sent the “China is Awesome Mom” post card.

I was embarrassed for her as her friends appeared content taking pictures and staring at bald people in robes. I wanted to yell.  To scream at this stupid woman and inspire her to have a sense of decency on this holy ground.

–Who are you praying to?

–If you didn’t have a television growing up, would you even be here?

–Are you just doing it to do it?

–Are you aware you are mocking the few people here who actually came here to pray?

I had another option in mind if being on her knees and being closer to God was her game but some monologues are best kept inner.

Movies and media would have you believe monks spend their days training their bodies and minds to counter the forces of darkness in hopes of winning a war that guards all of creation. They are under the masterful guidance of a leader who is a wizened old man with a fu man chu and gives the greatest, bestest advice ever.

Such, “Spirit Tourist” soul candy appears to have its origins in a Hollywood script meant at sucking cash from your wallets and misrepresenting the easily misunderstood aspects of Eastern religious and philosophical culture. You have been sold a product, not ideas and instances that correlate with reality.  Imagine what an Asian’s expectations of you would be if they grew up watching WWF, Beverly Hills 90210 and American Gladiators. Imagine a television show airing in Asia about a born-again televangelist devoting his life to manipulating people into seeing the light while he tries to make a fortune by selling holy water for the cheap price of 9.99 a sprinkle. Yeah, I’m sure people would find it interesting but we would never allow that cliché to dominate.

I saw an obese monk walking his complimentary overfed dog. The dog was well groomed and largely indifferent to the people it passed. Imagery of Hollywood movies with fit monks busting boards over the heads and dueling conflicted with my immediate experience.  I wondered how many vegetables it took to make a man that big. Perhaps he’s fond of cheese, fried cheese and anything with a double dose of transfat. Then again, he did capture the traditional statue of the fat Buddha with elongated ear lobes. Some say that emulation is the highest form of flattery. Except didn’t the Buddha have a burst out belly from fasting so much? 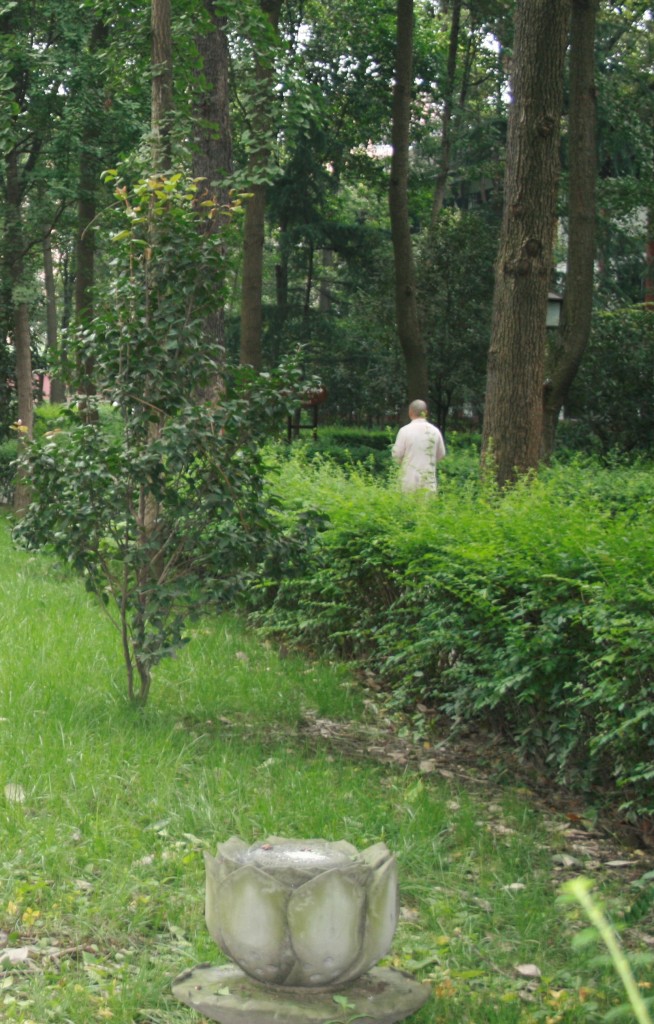 The majority of monks I observed never seemed to be in a hurry and just walked amongst the plants not really paying attention to anyone. The locals treated them as if they were a part of the temple itself taking pictures as if the monks were plants decorating a garden. I would have to call it a peaceful and chill environment.

The company of Buddhist-wannabe foreigners however, had a different idea. Bows, nods, and smiles were thrown at anyone in robes in attempts to grab their attention.  Apparently, this was their opportunity to create that perfect moment at the Asian temple in the far East.

“Look at me; I’m posing with a monk at a temple. I’m at the zoo of spirituality! I am not an animal. I am… wait for it:  “Spirit Tourist!”

Taoist philosophy would have us believe that it’s the emptiness of a cup that makes it useful.  And, in taking such learning in stride, really this afternoon has given me very little to complain about.

I found myself people watching (and by people I mean the denizens of the temple).

They seem carefree in a way with their lack of wealth. Books, prayers along with culinary and gardening duties seemed to take up a good amount of the day.  In a way they have turned their backs on what’s going on around them, similar to that scene in “Lion King” highlighting the “Hakuna Matata” values. They truly are a breed apart.

This, with their creaseless faceless, peaceful demeanors and well fed bellies (sometimes a little too well fed); they are a testimony that happiness is possible without following the dominant zeitgeist otherwise known as the tourist circuit. Here are the Chinese monks living away from the overripe cities in China. They were on their small inside looking at me on the outside. Sure I have to keep my voice down but I want to declare to them, “I am not a Spirit Tourist!”

His personal publication claptrap includes www.Ehow.com, Diplomacy Journal, www.travels.com, blah blah. His current writing project involves a postmodern novel that draws on themes such as nihilism, isolation and alienation in a world where you are told the good guys won. 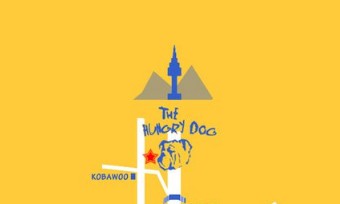